Due to overwhelming response, Registration for this webinar has been closed.Discuss the Presentation »

Nationwide, high school teachers are being asked to teach outside their areas of expertise. Because many states and districts are not including the Earth and Space Sciences into their course structure, concepts associated with geology, atmospheric and oceanic science, and astronomy are necessarily being incorporated into biology, chemistry, and physics courses. Specifically in physics or physical science courses, there are tangible and relevant connections to the Earth and Space sciences. We will explore these through example integrated lessons from the American Association of Physics Teachers that can be taught immediately upon return to the classroom. 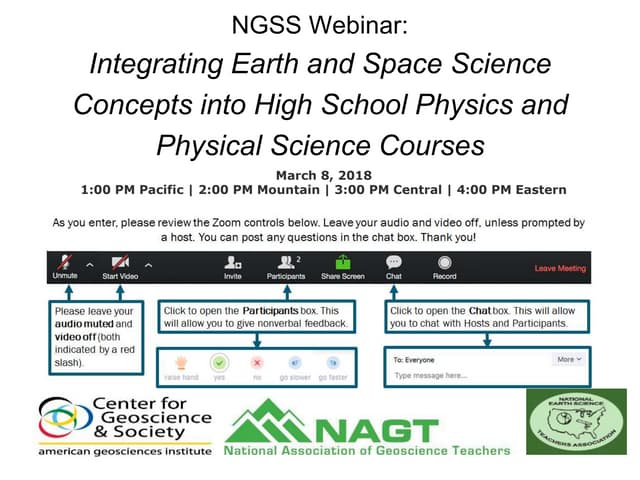 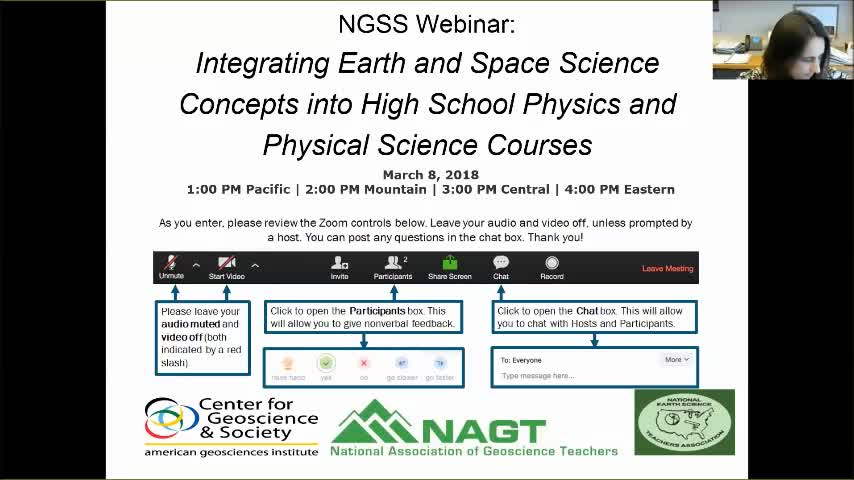 With the NGSS Earth and Space Science Working Group

Question 2. Our science department talked about teaching as a series of themed/ integrated quarters (i.e. Astrobiology). We kind of backed down when the guidance department suggested that students might need credits in chem, phys, bio to get into college.

2. In my physical science class, we went over local weather twice weekly as part of the bell ringer of class, Mondays and Thursdays; we talked about overall weather patterns, wind patterns, and since we live in the Rocky Mountains, I could apply weather conditions with different seasonal activities: winter-students who skied or snowmobiled, we could talk about snow conditions, snow types, we did avalanche training, and dug snow pits to see the different layering of snowfalls; we were able to equate the weather patterns with some of the physical science concepts since whatever we were currently studying, we still had those weather reports. I also was able to connect to chemistry-acid rain obviously, but ice-cores, oxygen isotopes, etc.

This post was edited by Margaret Molloy on Mar, 2018

This post was edited by Martin Schmidt on Mar, 2018
I was unable to see the live webinar because I was meeting with chemistry teachers on integrating Earth science, but looked at the recording. Probably will happen again in April!

Thanks for working on this subject; since many districts implementing NGSS are (unfortunately) not creating Earth science courses, NAGT and NESTA need to make a strong push to inform teachers of biology-chemistry-physics (BCP) of Earth science content and connections.

A. As one topic that is vital to Earth science study, where to include a good study of plate tectonics is important. Appendix K puts it mainly in physics (HS-ESS2-1 & 2-3), but I would say it fits better in chemistry since plate tectonics is a vital chemical refinery operation. If a district puts plate tectonics in physics, how do we help teachers and students see its connections to physics? Specific ideas are below but I guess the big idea is to see the Earth as having forces and energy (physics topics!) and so is active & moving - a change from thinking it's static. Actually, since plate tectonics is so fundamental to all geoscience, it belongs in all 3 of BCP and in fact HS-ESS1-5 is included in all subjects though its emphasis on ages only touches on plate tectonics mechanisms.

B. The other over-arching subject is climate change - NAGT and NESTA should work to be sure it is included in EVERY science class in high school. Connections here are easier: biology effects are clear, it's about the chemistry of the atmosphere, and physics is about energy so the energy budget of the Earth fits. In Appendix K, HS-ESS3-1 is in biology and chemistry; HS-ESS2-4 is in chemistry and physics; HS-ESS3-5 is in chemistry, HS-ESS2-2 is in physics. We need to make sure that even as these might move around, schools keep climate change in all courses.

Having taught both physics (& chemistry) and geosciences, below are some connections to physics I can see. I often relate these to Performance Expectations since they may be more directly related to implementation goals, and include several DCIs.

1. Add earthquake waves to the physics study of waves; has the advantage of another example of longitudinal waves besides sound, and wave behavior at liquid-solid boundaries. Demonstrates how the waves tell us about the interior Earth HS-ESS2-3 and PS4. http://web.ics.purdue.edu/~braile/edumod/waves/WaveDemo.htm and
http://ds.iris.edu/seismon/swaves/

2. Physics calculations of speed:
a. Add speeds of objects of Earth systems: wind and water (horizontal and vertical), flowing ice in glaciers. Use live data from sources like https://earth.nullschool.net/.
b. Traditionally earthquakes have been located by differences in speed in P and S waves, so here is another speed example. Once located, move on to the phenomenon of what causes the pattern of earthquakes on the Earth and so to plate tectonics.

3. Besides studying astronomical bodies, point out how we use the e-m spectrum to study Earth - e.g., uses of the different wavelengths as sensors is now included in the descriptions of real-time weather satellite data https://www.star.nesdis.noaa.gov/GOES/GOES16_CONUS.php.

4. As mentioned above, climate as energy budget of the Earth. HS-ESS2-4

5. Physics has sometimes included buoyancy (net forces - PS2), so could include isostatic effects of granitic & basaltic crust, along with concepts of density.

6. MS-ESS2-6 includes the Coriolis effect, but can also come up discussing rotation in physics (and I wonder how many students really understand it in middle school). Best explained in physics, the Coriolis applications are in Earth science.

7. HS-PS2-4 asks for numerical calculations of the Law of Gravity, and those calculations of a few positions of objects are a normal part of physics. However, the graph of air pressure vs height data from a balloon sounding (daily data easily available http://weather.uwyo.edu/upperair/sounding.html) shows a perfect logarithmic curve of inverse-square force-distance relation - thus showing a continuous "calculation" of the force of gravity on the compressible air molecules.

8. As relevant problem-based learning ("Why are we studying this?"), consideration of the Grand Challenges provides a guiding question of "Where we will get our energy in the future?". This is a valid topic for physics, and many of the solutions involve ESS - solar, wind, tides, geothermal, uranium, etc.

While enabling remote desktop you need to configure your windows firewall automatically with latest update, you can check this http://remotedesktopwindows10.com setting in control panel and then easily get the access to connect one computer with another. This is the most interesting function for me and this Online tutorial helping me so nicely.