Jump down to: Nomination and Selection | Evaluations and Reflections | Past and Present Interns 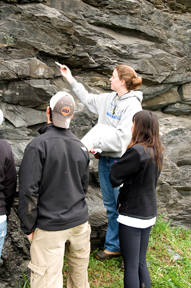 Started in 1965, the NAGT-USGS Cooperative Summer Field Training Program is the longest continuously running internship program in the earth sciences. Over the past fifty years, more than 2400 students have participated in this program with an impressive number of these individuals becoming full-time employees of the USGS.

This cooperative program was launched at the Geological Society of America meeting in Kansas City in early fall of 1965 when William "Bill" Pecora, then the newly appointed Director of the USGS, held a meeting with a small group of distinguished professors and officers of the NAGT. Pecora felt strongly that the USGS needed to be more engaged in geological education. He had a plan for how this might be accomplished and wanted to get the professors' reactions to an initiative that would provide better linkage to academia while, in the process, providing better summer field assistants for the USGS. Pecora suggested that the USGS would provide support by way of internships for outstanding undergraduate geoscience majors, while NAGT would advertise the program to faculty and students, solicit nominations, distribute applications, and assist in processing all materials. Needless to say, "Pecora's Plan," as it became known, met with instant approval.

Field camp directors and students can get more information about the program at the USGS Program Page. Please refer to the USGS Field Camp Survey for a comprehensive list of national college and university geoscience field camps. Please contact the program's executive secretary with any remaining questions.

A joint committee oversees the nomination process with active participation from the highest levels of both organizations (including the Director of the USGS). The program "year" begins in September with all field camp directors being provided with program information and a request for nominations. All nominations are collected through an online submissions portal. If you are not currently receiving emails from the NAGT/USGS program, please contact the Executive Secretary to be added to the database of field camp directors. The link to this portal will be sent to Directors along with instructions in late summer/early fall each year. Please contact the program's Executive Secretary with any questions or concerns that you might have:

Field camp directors can nominate students whose field course was at least 4 weeks in duration and completed in the year they are nominated. In addition, nominees must be US citizens or Resident Aliens. Directors are encouraged to talk with potential nominees to ensure student interest and availability before submitting nominations. One certain of a potential nominee's eligibility, interest, and availability, field camp directors can nominate:

Once nominated, students will be contacted by the USGS Education Office and invited to apply for an internship by providing a letter of interest, their resume, and transcripts. At the same time, USGS scientists interested in working with interns will be sending information about field, laboratory, or office-related scientific projects to the Education Office. The USGS will then match candidates according to skills and interests with up to five projects. The list of matched candidates is then sent to USGS scientists for discussion, review, interviews, and selection. Interdisciplinary, system science is a cornerstone of our science and all disciplines in the USGS are encouraged to take advantage of this program's support and available talent.

USGS personnel make final selections. USGS will decide among the applicants and then hire the selected NAGT nominees for available field, laboratory, or office related scientific positions throughout the country for up to 5 months. USGS places interns wherever the project scientists need them. Most recently, interns have worked in Reston, VA; Menlo Park, CA; Miami, FL; St. Petersburg, FL; Denver, CO; Woods Hole, MA; Baltimore, MD; Seattle, WA; Dover, DE; Trenton, NJ; Vancouver, WA; Indianapolis, IN; Lincoln, NE; Columbia, SC; Santa Cruz, CA; and many other locations. Students hired through this program have continually received outstanding reviews from our managers and many of these individuals have become full-time colleagues over the decades. Interns employed through this program are hired at a rate commensurate to their educational level and experience, typically at a GS-5 Grade, Step 1, with an adjusted locality payment.

Over the years, NAGT has succeeded in identifying top-flight students for the program, and the USGS has succeeded in garnering the interest of competent and enthusiastic supervising mentors. Evaluations of the program by the students have been strongly positive, and the interns have continually received outstanding reviews from USGS managers. The NAGT-USGS Cooperative Summer Field Training Program continues Pecora's vision of greater educational involvement, and provides a first-rate professional experience to students early in their careers.

Current-year interns should complete the program evaluation questionnaire to help us continue to evaluate the program's effectiveness and impact.

If you took part in an internship in the past, please consider reflecting on your experience and how it affected the path of your personal and/or professional life. NAGT is gathering these stories via the reflections form and will use these stories to both evaluate the program and to generate new materials for the program website. You can see the collection of reflections that have already been submitted by past interns on the Reflections page.

Present and Past Interns