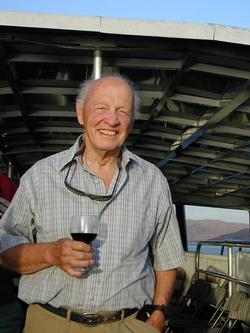 The Robert Christman Distinguished Service Award was established by the Executive Committee in April, 2008 to recognize individuals who have provided long, distinguished service to the Association at the national and/or section level.

The Award honors Robert "Bob" Christman who for more than thirty years provided exceptional service to the Association both at the national level and also to the Pacific Northwest section. Bob served the Association as a Councilor-at-Large [1983-84], Secretary/treasurer [1989-91], Executive Director [1992-2002], and Co-executive Director [2003-2005]. He was also a co-editor of the Journal of Geoscience Education from 1979 until 1987, contributing 26 film reviews and writing a column for secondary school teachers. Bob served as President of the Pacific Northwest section in 1974 and 1975 and served as the section's Secretary/treasurer after that.

Recipients of the Robert Christman Distinguished Service Award are selected by a majority vote of the Executive Committee. Any active NAGT member may submit a nomination. The nomination letter should detail the contributions that the individual has made to the Association at the national and/or section level. Although an award recipient may be selected annually, the award was not established as an annual award. Normally, when a recipient has been selected she or he will be recognized at the Annual Meeting of the Association held in conjunction with the Geological Society of America.