Teaching About Evolution in a Creationist Environment

I remember quite clearly one Sunday morning when the pastor of the church I was attending said, "You cannot be a Christian, and have any integrity, if you believe in evolution." For me, this was the starting point of a decades-long exploration of the perceived conflicts between science and religion, particularly regarding evolution. Today, I teach biology at a conservative Christian university in the Southwest. My primary teaching assignment is the non-science majors' biology course. This class includes a survey of the human body as well as genetics, biotechnology, ecology, and evolution. I have taught this class for over five years now and have found it to be well received, despite my impression that many students approach it with a strong reticence towards some aspects of the course, particularly evolutionary theory. To verify this, I recently surveyed the students on their perspective of the origin of life on Earth. I asked them to identify which of these four positions most closely aligned with their own. 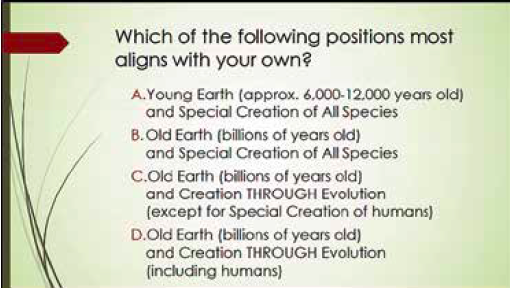 Of the 83 students (among three different class sections), 45 (54.2%) held the young earth/special creation position. Seventeen (20.5%) accepted an old earth but special creation of all life forms. Eighteen (21.7%) believed in an old earth and evolutionary process to create life, but believed humans were made in their current form through divine action. Only three (3.6%) believed in an old earth in which evolutionary processes accounted for all life including humans.

Despite the overwhelming majority of my students aligning with views of creation that are counter to science, I have successfully taught evolution in my non-majors class with little to no concerns expressed from my students. I believe this is because of a handful of clarifications I make about the nature of scientific knowledge.

At the outset of my class, I always describe one basic assumption of science: all natural phenomena can be explained through natural causes. Whether or not a scientist believes supernatural acts (such as healing of sickness through prayer) can occur, when they are practicing science they limit their explanations to natural causes. This is what drives scientific inquiry. Holding this basic assumption, I tell them, explains why blood sacrifices are no longer offered when crops fail. Instead, some scientifically minded person in the crowd decided to seek out natural causes and discovered irrigation and pest control.

Another important revelation I help my students realize is that among the scientific community there are many Christians who hold different views about evolution. Science and Christianity: Conflict or Coherence, written by Nobel Prize nominee Fritz Schaeffer (2013), is an excellent resource to reveal the many Christians throughout history who have contributed significantly to science. The Lost Book of Genesis One by Christian Old Testament scholar John Walton (2009) presents a very different interpretation of scripture than my students are accustomed to. The TEDx talk The E Word exposes them to an evangelical Christian biologist, Dr. April Maskiewicz (2016), who openly embraces evolutionary theory alongside her Christian faith. Just these simple revelations allow my students to open their minds to new ideas and provides a "safe space" to discuss what many consider quite unsettling science content.

If Evolution, Then Man Isn't Special... My View

The most common concern I hear from students (and others) who find evolutionary theory at odds with their religion revolves around the concept that humans are made in the image of God. "How can this be," they say, "if we merely evolved from other animals." I consider this an entirely fair concern and address it with equal seriousness. I assert that humans are the only species on the planet who live in fundamentally different ways than we did even a few hundred years ago. Airplanes, iPhones, satellites, and the Internet are just a few examples of humans' creativity that have altered our ways of life. No other species demonstrates this creative power—not even our closest relative, the Bonobo! I maintain this is what is meant by being made in God's image and this is what makes us special. Whether or not this specialness happened through the gradual process of evolution or in a special creation moment doesn't take away from this characteristic held only by mankind.

Perhaps the most important aspect of my evolution instruction deals with humility. I generalize the conflict between evolution and Christianity and say there are basically two explanations we must consider. The first explanation says that Earth's species were created in their current form, mankind was made through special creation in the Garden of Eden, and Earth is between 10,000 and 12,000 years old. The alternative explanation states that all species on Earth are related by common ancestry through the process of evolution, spanning billions of years. I ask my students to imagine that God made a special appearance in our class to reveal which explanation is true. I tell them that whichever answer is delivered they must be ready to accept it and not let the outcome impact their religious faith. If they learn that Darwin "got it right" and that they are, in fact, related to great, great, ancestors from a primordial soup...how would they handle that? If learning this would shatter their faith, I tell them, then their faith is built upon the wrong foundation. I recently had a student's "end of term" evaluation echo this sentiment and encourage me to continue teaching evolution (and all science) the way I do; the student reported: "Recently I struggled with believing in God and you helped bring me back to Him and see how Christianity and science can co-exist." I share this testimonial with my students and remind them that, as a science professor, I can recognize that only one of the explanations is scientific, but that I have the humility to accept that science might not explain all aspects of our origins. Conversely, as a person of faith, I am humble enough to know that how we interpret the book of Genesis is also a human construction and, similar to how scientific knowledge changes and improves, we must be prepared to reconsider our scriptural interpretations as new information is discovered.