In my position as a religion teacher at an independent high school in the greater D.C. area, I am graced with the privilege of walking my students through a critical study of the Bible, including the creation stories in Genesis. I have a fairly diverse student body—though I teach at an Episcopal school, my students come from Catholic, Methodist, Presbyterian, Baptist, Hindu, Muslim, Atheist, Agnostic, Jewish, and non-religious backgrounds. Some are devout, others less so. Some are firm in their theological convictions, others not-so-much. Yet, by the grace of God, they are all curious. Their curiosity is my greatest aid in teaching and discussing relationships between fields of knowledge, including the sometimes contentious relationship between empirical and non-empirical ways of knowing (or, if you prefer, between science and religion).

At the beginning of each semester, I start my New Testament class with an exercise that is especially impactful for students who ardently defend a young earth theology or who are otherwise skeptical of scientific discovery in light of their religious instruction. I ask students to create their own data set comparing the creation myths in Genesis 1:1-2:3 and 2:3-25 (note: chapter and verse designations are not original to the texts). Each student independently makes a list of the following items in each story: the number of days, the order of creation, the title of the deity, the manner in which the deity creates, and how humans are created. After students do this exercise for the first story, we repeat the analysis on the second story. I do this exercise not because I think students must really know about these creation myths in order to better understand the New Testament per se, but because this exercise can teach them a lot about the spirit (or psychology) which fueled the creation of these narratives in the first place.

Once students have collected information for analysis, I ask them to compare data sets by working in groups to determine what, if any, differences they find between these two accounts. In brief, the students find that the order of creation is different (ex: plants before humans / man before plants), the titles of the deity are different (God / LORD God), the number of days are different (seven / one), the manner in which the deity creates is different (through speech / through physical contact), and how humans are created is different (male and female created simultaneously in the image of God / a man created from dust, then a woman created from the man's rib).

Here's where the magic begins to happen. The students get curious, and they start to ask questions.

For the students who are raised on biblical literalism and young earth theology, this exercise can be disconcerting, with emotions ranging from confusion to anger. They are, understandably, going through the tough process of internalizing information that conflicts with pre-existing knowledge. It's not easy, but it can be productive, in the sense that it's hard to sustain a political and theological commitment to young earth creationism (YEC) after doing this exercise. 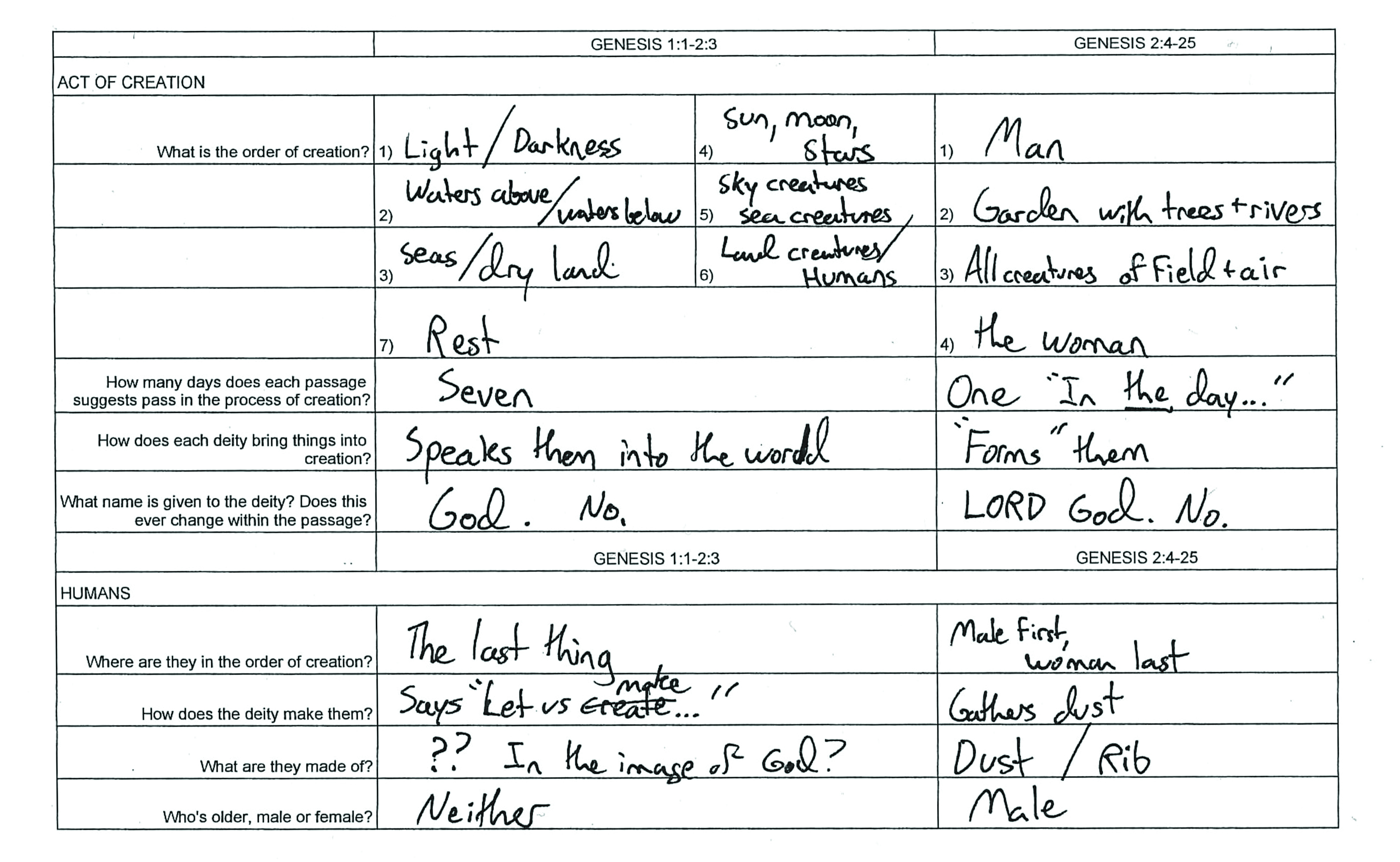 More than that, the exercise is good pedagogy. While you might have evidence that proves to you that Earth is much older than ten thousand years, that won't help most YEC students. If spreading knowledge was as easy as putting facts on the table or showing charts and graphs, we'd all be out of a job. Knowledge development is experiential, and this assignment provides them with the experience of collecting data, analyzing the data, and then trying to explain the data. My students might distrust evidence I provide, but they have a hard time distrusting evidence that they collect themselves. If confirmation bias teaches us anything, it's that no one likes to argue against their own evidence. It is virtually impossible to insist that the world was created in exactly seven Earth days when you discover, all for yourself, that the seven-day account is only one among others within the same book of the Bible.

Though my students always ask great questions, I require them to answer one of my own: "Why were these stories written in the first place?"

Requiring students to think about why the stories were written allows them space to explore their curiosity; it challenges them to consider what parts of human desire such stories fulfill. I encourage critical reading and thinking by providing my students with an opportunity to collect their own evidence, and I encourage creative thinking by requiring them to come up with their own explanations for the discrepancies they find. That there are multiple creation stories is true—what they mean is up for debate.

After discussing student explanations, I offer some scholarly perspectives. The creation myths in Genesis are etiological—they explain why the world is the way that it is. Why do humans farm? Because God put us on earth to till God's garden. Why does water come from the sky when it rains? Because "the waters below" (ocean) and "the waters above" (sky) are made of the same stuff. Why do human bodies decay so easily into the soil? Because we are made of dust. In other words, these stories tap into the wellspring of human curiosity that drives our greatest discoveries. Somewhat like the scientific method, the creation stories start with questions and, ultimately, offer answers.

Somewhere, someone reading this article is screaming at me right now. But hear me out. Our species likes to ask questions and to seek answers. The creation narratives in Genesis tap into the same energy that feeds our thirst for answering the questions we ask of ourselves and of the world around us. Not answering them is not an option. We want to know from where we come and to where we go—as individuals, as a people, and as a planet. The authors of the creation stories were as driven by this desire for understanding as was Galileo looking through his telescope. We want to know the world, and our place in it.

For creationists, the accounts of creation in Genesis offer compelling answers to these questions. Beating them over the head with a counter-narrative (empirical or not) is a fool's errand. Believe me, I've tried and failed. What has produced satisfactory results is approaching students in communion and community, recognizing and honoring the value they place on these narratives, and encouraging them—not to throw out their religious upbringing and instruction—but to dive deeper into the texts themselves and to critically reflect upon the richness of the narratives just below the surface. I no longer enter into power struggles with students about the superiority of my knowledge and the inferiority of theirs. What I do, to great effect, is ask them to explore their basic human curiosity, to find their own evidence, to test their own theories, and to learn more about what it means to be a human being.