Most Earth science teachers are aware that young earth creationism (YEC) claims that Earth is less than 10,000 years old and that most of the geological record can be ascribed to Noah's Flood. However, many may not be aware of two Kentucky tourism sites that are devoted to promoting YEC. These YEC tourist sites are: the Creation Museum (near Hebron) and the Ark Encounter (in Williamstown). Both of these attractions are run by Answers in Genesis (AiG), a ministry devoted to promoting YEC and a rather militant biblical literalism. Millions of people have visited these attractions. Other creationist museums exist, but most are rather small and poorly funded in contrast to the Creation Museum which cost at least $27 million to construct and the Ark Encounter which may have cost more than $100 million. The Ark is especially problematic because it is subsidized in part by a Kentucky tax incentive program that sees it gets back up to $1.8 million per year in sales tax receipts until 2026, all the while discriminating against anyone who will not sign AiG's statement of faith and provide information on where they attend church (see: http://www.kentucky.com/news/state/article73971147.html and https://answersingenesis.org/about/job/?gnk=job&amp;gni=8a78842b5da186cf015da8579dca5f56).

To assist students in overcoming misconceptions from what they may have encountered at such locations, it is helpful to know what is being asserted. I have reviewed both of these attractions in detail for the National Center for Science Education website (see Phelps, 2007 and 2016). I briefly discuss here a few of the claims presented by the Creation Museum and Ark Encounter, with links given below to provide the actual science on some of the topics. Many of the more common creationist claims are dealt with in Isaak (2007). 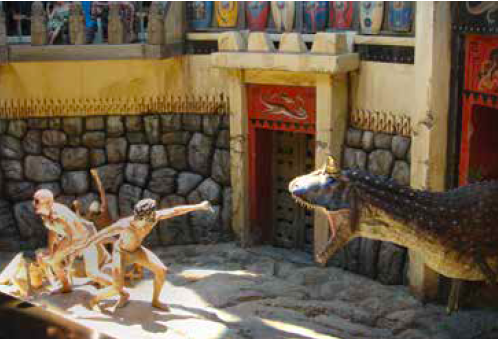 Numerous college textbooks explain how geologists interpret ancient environments. These texts include Prothero and Schwab (2013). Unfortunately, popular treatments of the subject are difficult to find online. An interesting technical publication that documents more than a mile of sedimentary rocks in Kentucky beneath the Creation Museum and Ark Encounter can be found at: http://kgs.uky.edu/kgsweb/olops/pub/kgs/RI34_12.pdf

Other fields of science and history that contradict the version of biblical literalism promoted by AiG are also distorted and manipulated.

And so it goes... To the processes of science and the work of scientists, the contents of the Ark Encounter and Creation Museum pose no real threat, though AiG now has political connections at the highest levels in Kentucky and elsewhere. Indeed, the "Museum" and Ark are insulated in their own world, providing attacks on conventional science and history while not participating in either. However, they do represent an attack on science education. A tiny number of public school groups are known to have visited the Creation Museum and the Ark (see: http://www.lee.k12.ky.us/school_NewsArticle.aspx?artID=861&amp;schoolID=16#sthash.kyqFIiJj.dpbs). Many more students have visited with parents and relatives. Teachers may, in turn, end up soft pedaling or totally omitting topics in science (and perhaps history) classes that might upset the parents of conservative Christian students. A poll reported in PLoS Biology revealed that 25% of high school biology teachers devoted at least one or two classroom hours to creationism and intelligent design creationism (Berkman et al., 2008). As many as one in six of the biology teachers surveyed indicated belief in YEC. How would the numbers for Earth science teachers compare?

What can science educators do about this situation? Long term, we can improve the way we teach the scientific method, evolution, and relevant sciences. Too often scientific method is discussed in introductory lectures, but not applied throughout the semester. Likewise, geologic time and evolutionary topics are sometimes discussed in single lectures, without being integrated into the whole course (Scott, 2010). Considering how many people have visited AiG's attractions, educators may consider indirectly countering YEC geological claims without explicitly mentioning them. Once we, as Earth science teachers, familiarize ourselves with the assertions of such exhibits as those at the Creation Museum and Ark Park, we can be more diligent in educating our students on the processes of science, critical thinking, and data analysis.

Phelps, D.J., 2007, The Anti-museum, An overview of the Answers in Genesis Creation "Museum":
http://ncse.com/library-resource/anti-museumoverview-review-answers-genesis-creationmuseum (accessed February 2018).