Bending Rocks in the Classroom

How a rock responds to stress is a concept critical to forming explanatory models in the geosciences. While your students are likely to have had lots of experience with rocks, few will have experienced them behaving elastically. As a result, most will think of rocks as rigid solids (Hubenthal, 2015), something which impedes learning of concepts such as the elastic rebound theory.

It is possible to bend rocks and minerals in class to demonstrate their elastic property (e.g., returning to their original shape and size after the forces deforming them have been removed). For example, thin samples of the mineral mica can be easily deformed with your hands. When the stress is removed, the mica springs back to its original position. However, mica is unlikely to be aligned with students' concepts of "rocks as a rigid solid." 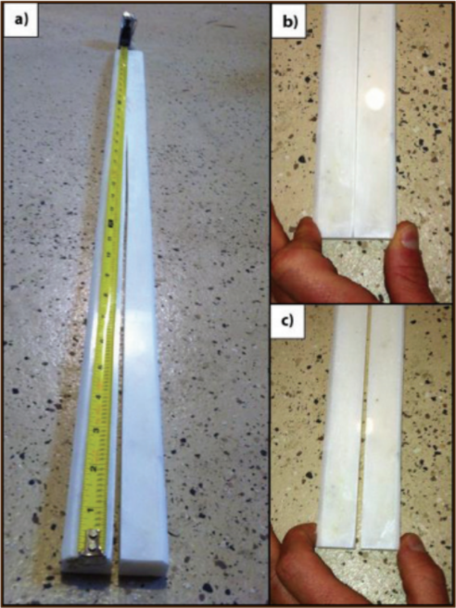 Hide
FIGURE 1. Marble tongs are notched lengthwise like a springless clothes pin (a). This provides students with an opportunity to see and feel the elastic deformation of rocks when stress is applied to the cut end (b). When the stress is removed, student can also see and feel them spring back as the stored energy is released (c). [Photo: Michael Hubenthal]

Provenance: Michael Hubentha
Reuse: This item is offered under a Creative Commons Attribution-NonCommercial-ShareAlike license http://creativecommons.org/licenses/by-nc-sa/3.0/ You may reuse this item for non-commercial purposes as long as you provide attribution and offer any derivative works under a similar license.

A better demonstration is the use of a long, thin (1.5") drill core (Sicree, 2008; Lahr, 2006) of metamorphic or other competent rock that has been notched along three-quarters of its length, like a springless clothes pin. While illustrative, a major limitation of this demonstration is obtaining a rock core and slicing it. Fortunately, there is an alternative that makes this demonstration accessible to instructors with limited resources and budgets (Figure 1). A supply of homogenous and fine-grained natural stone like marble (or a cultured stone product very similar to natural stone) can be found in the flooring or bath sections of most "big box" home improvement stores. Sold as a threshold, it is available in sections that are 36" long by 2" wide. At the time of this writing, a marble threshold could be obtained for less than $10. A bonus of making a purchase at a "big box" store is that many of them have the equipment to cut the threshold in-house and will make the cuts required for free. A countertop shop should also be able to make the cuts for you, either for free or for a small fee. Handy instructors with tile saws and safety equipment at home could also cut the marble threshold themselves.

Start by cutting four two-inch-long pieces off one end of the threshold as illustrated in Figure 2 (cuts "a" through "d"). These pieces will become "hand samples" to pass around the class. Next, make a 22-inch lengthwise cut in the threshold (cut "e"). This will leave several inches of uncut material at the end. Your tongs are now finished! While only one set is necessary for the demonstration, creating several is strongly recommended since the tongs will eventually wear out and fracture unexpectedly.

The materials and construction of this demonstration are more accessible than a notched drill core, but there is a trade-off. Most marble thresholds or scraps from countertops will have smooth edges and polished surfaces. The presence of these man-made alterations has been shown to lead younger students to believe that marble is man-made rather than naturally occurring (Happs, 1985). This effect may also be present for undergraduates. To overcome this, crack the hand samples into smaller pieces to expose the "raw" inside edges before passing them around.

Hide
FIGURE 2 (right). Cutting guide for the marble tongs demonstration. Dashed lines (a) through (d) indicate cuts to create material samples to pass around the room. Cut (e) is made lengthwise to notch the threshold like a springless clothespin. [Photo: Michael Hubenthal]

Provenance: Michael Hubentha
Reuse: This item is offered under a Creative Commons Attribution-NonCommercial-ShareAlike license http://creativecommons.org/licenses/by-nc-sa/3.0/ You may reuse this item for non-commercial purposes as long as you provide attribution and offer any derivative works under a similar license.
Because students' initial conceptions of rocks may be different from the scientifically accepted view we would like them to have, instruction should encourage conceptual change [the development of ideas about a concept (rocks) by making a learner's prior knowledge explicit and then restructuring elements of this existing knowledge through the course of new learning (e.g., Nussbaum and Novick, 1982)]. Begin by holding up a hand sample of marble. Ask the students what it is and lead students to conclude it is a rock. Next, ask if they think you could deform the rock and have it spring back to its original shape when you let go. Be sure to ask them to explain why they believe what they do. Making their current experiences with rocks explicit is an important step in the process. Next, grasp the cut end of the tongs and squeeze the slot closed (Figure 1b). Next, release the tongs (Figure 1c), so students can see them spring back. Better yet, circulate the tongs and allow students to pinch them closed and watch them open when they are released. In this way, students have an experience with rocks that most would not normally have.

If the tongs break during the demonstration, consider making explicit connections to an earthquake where the break is a fault and the stored energy was released as P waves which could be heard as the rock snapped. Alternatively, you could place a phone with an accelerometer application, such as the "Seismometer" app for IOS, running on one end and intentionally break the tongs. The phone then could record the seismic waves or energy propagation from the break. 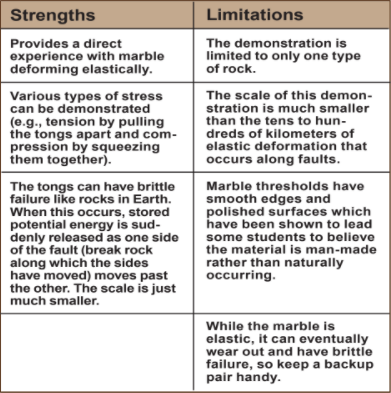 ×
TABLE 1. Strengths and limitations of the marble tongs demonstration

Provenance: Michael Hubenthal
Reuse: This item is offered under a Creative Commons Attribution-NonCommercial-ShareAlike license http://creativecommons.org/licenses/by-nc-sa/3.0/ You may reuse this item for non-commercial purposes as long as you provide attribution and offer any derivative works under a similar license.

Finally, introduce the concept of elastic response to stress as a name for the rock's behavior. Most students will be familiar with the concept of elasticity and be able to give examples (e.g., rubber bands or balls), but ultimately will hold non-scientific understandings that are similar to ductile behavior (Hubenthal, 2015). If time allows, expand the discussion to include ductile and brittle responses to stress. Again, it will be important to use a spectrum of objects as examples and to illustrate how the same objects can experience all three responses. While this demonstration has a number of strengths, you will also want to be mindful of its limitations (Table 1) and address those explicitly with students.

From here, students' understanding of elastic response to stress can be applied to geologic applications as an explanatory model. For example, it can help students make sense of Global Positioning System data (see Brudzinski in this issue) or map the physical representations such as the earthquake machine (see Dolphin in this issue) or the asperity model (see LaDue and Schwartz in this issue) to their geologic targets.

Sicree, A., n.d, How to Bend a Rock: https://mineralseducationcoalition.org/education-database/how-to-bend-a-rock/ (accessed October 2017).

Comment? Start the discussion about Bending Rocks in the Classroom