NICOLE D. LADUE (nladue@niu.edu) is an assistant professor and JOHN SCHWARTZ (joshua.schwartz@niu.edu) is laboratory manager in the Department of Geology and Environmental Geosciences at Northern Illinois University in DeKalb, Illinois

Rocks deform, or change shape, as a result of stress. In one geologic setting, like a fault, rocks can experience multiple types of deformation. A fault exists where there are large fractures in geologic bedrock along which there has been movement in the past. This is evidence that the rock has experienced brittle deformation. As stress builds up around a fault the rocks will bend on either side of the fault (see Brudzinski in this issue). When the stress gets great enough, the rocks will slip (or move) relative to one another, releasing stress and returning the rocks to their original pre-bent shape. The geologic event that occurs when the rocks move is called an earthquake. This sequence of events tends to repeat in what geologists call a stick-slip pattern, where the fault gets stuck (stick) and then moves (slips) periodically. 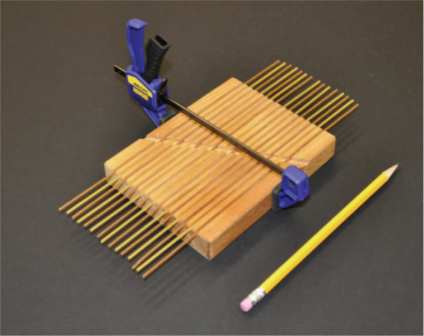 Provenance: Photo by J. Schwartz, 2017
Reuse: This item is offered under a Creative Commons Attribution-NonCommercial-ShareAlike license http://creativecommons.org/licenses/by-nc-sa/3.0/ You may reuse this item for non-commercial purposes as long as you provide attribution and offer any derivative works under a similar license.

Faulted rocks do not typically break in one perfectly smooth plane. Instead, the plane of a fault is usually uneven and bumpy. As stress builds around a fault, the uneven or bumpy places stick and keep the fault from slipping. These "stuck" places are called asperities (see video: http://www.iris.edu/hq/inclass/animation/asperity_on_a_fault). When an earthquake occurs, stuck patches slip and potential energy is released as seismic energy. We have modified an existing physical model using spaghetti, wood, and a hand clamp to represent asperities in earthquake behavior and developed a worksheet to facilitate students in building meaning about earthquakes in the real world.

Description of the Model

The original design of this physical model was developed by Paul Doherty at the Exploratorium in San Francisco. It was later modified by John Lahr at the United States Geological Survey (USGS) and Michael Hubenthal at the Incorporated Research Institutions for Seismology (IRIS) to be more classroom friendly. We have modified the design to make it easier for students to perform the manipulations. As you can see in Figure 1, the model includes spaghetti laid in grooves across a wood block bisected by a "fault." Students add stress to the model by squeezing a small hand clamp slowly (see video https://youtu.be/lIx-NQnGYv0). As stress builds up, the spaghetti undergoes elastic deformation first, then brittle deformation as the fault moves. A full description on how to construct the asperity model and the enhancements we made to the model can be found in the online supplemental documents.

How does the model compare to the real world? Table 1 details its strengths and limitations.

Suggestions for the Classroom

When working with a physical model, it is easy for students to get distracted by the fun of something breaking. When we made a class set of models and they worked in pairs, students were quick to play with the model and sometimes ignored the worksheet.

Therefore, before you have the students run the model, engage them in bending and un-bending the spaghetti to teach the concept of elastic and brittle deformation. The first time a student runs the model, he or she may apply stress so quickly that all the spaghetti fails at once. This prevents them from observing the elastic deformation preceding the first earthquake and the aftershocks after the main earthquake. They will need to reset the model several times. Point out to them that they should apply stress to the clamp slowly, then release their grip on the clamp at the moment when most spaghetti pieces break. This will help them observe that a few pieces of spaghetti will remain unbroken. If they leave the model untouched, those unbroken pieces will break later, modeling aftershocks. We varied the spaghetti, alternating pieces of whole wheat and regular thin spaghetti in each slot of the model. This creates variation in the flexibility of the spaghetti and models the natural variation in rocks. Another approach is to have students use cell phones to video the model while applying stress. They could use a slow motion feature to replay the video so they can isolate the elastic and brittle deformation of the spaghetti as the asperity occurs.

Working with physical models is fun. As a result we sometimes neglect the important mapping between the model and the real world. Help students build meaning from the model by questioning them as you circulate around the room, asking formative assessment questions that check their understanding of the jargon used in the lab and scaffolding questions on an activity worksheet. (The worksheet available linked online as a supplement to this article is a starting point and can be revised for your particular classroom context.)

The description above and the worksheet are intended to facilitate a short, student-centered activity in class (~20 minutes). The model could also be adapted as a demonstration in which the teacher projects the model on a screen and points out the elastic and brittle deformation. Alternatively, the activity could be adapted to be an inquiry lab where students pose a question and test their hypothesis, e.g., testing the flexibility of regular or whole wheat spaghetti. In nature, rock types have a range of strengths. Testing multiple combinations of spaghetti composition can demonstrate that variation in rock composition and structure influences the behavior of faults. Regardless of how you implement the model, it is necessary to help students map not only the strengths of the model, but the limitations as well (see Table 1 below). 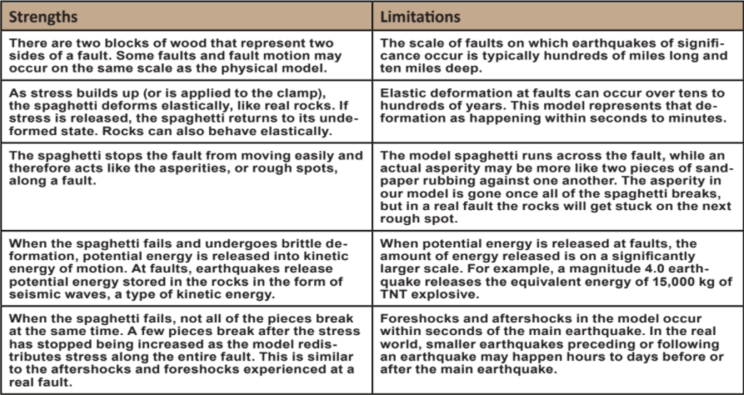 ×
TABLE 1. Strengths and limitations of the asperity model

Provenance: J. Schwartz and N. LaDue, 2017
Reuse: This item is offered under a Creative Commons Attribution-NonCommercial-ShareAlike license http://creativecommons.org/licenses/by-nc-sa/3.0/ You may reuse this item for non-commercial purposes as long as you provide attribution and offer any derivative works under a similar license.

The spaghetti asperity model is a good physical representation of the elastic deformation that builds up around a fault prior to fault movement. Preceding this activity with a demonstration of the marble tongs from the "Bending Rocks in the Classroom" article (see Hubenthal in this issue) will help students recognize that the spaghetti bending is similar to how rocks bend in the real world. Instructors should consider connecting the Asperity Model to the Global Positioning System activity (see Brudzinksi in this issue) so that students can see that the elastic deformation around a fault that they observe in the spaghetti model also occurs on a real world scale. Lastly, the episodic, stick-slip failure pattern that students observe in the Asperity Model can be explored in using the Earthquake Machine (see Dolphin in this issue), where the asperity is modeled by sandpaper. Using several models and pointing out the strengths and weaknesses of each model, help students construct a scientific mental model of geologic processes. Additional resources are available online at https://serc.carleton.edu/teachearth/activities/181227.html.

The NIU CLAS Machine Shop added the metal plates to the model. J. Schwartz developed the design while N. LaDue developed the activity. Aspects of this work were supported by NSF-EHR #1640800.

Comment? Start the discussion about Teaching Fault Asperities with Spaghetti