ONLINE Extra: The History of Elastic Rebound Theory: How a Big Disaster Helped Us Better Understand How the Earth Works

It was the last half of the 19th century in the United States. The city of San Francisco was growing in prominence and population (Dalessandro, 2006; James, 1911). During those last years of the 1800s, the population doubled almost monthly. The promise of gold and the city's location on the Pacific coast made it an attractive destination for those seeking wealth.

By the early 1900s, a full 25% of the US population located west of the Rocky Mountains lived in and around San Francisco. There were 17 cable car lines, 37 banks, and three opera houses. The city rivaled New York for imports and exports and became known as The Jewel of the West and Paris of the Pacific.

During the early morning hours of April 18, 1906, the earth began to shake violently in what was later classified as a magnitude 7.8 earthquake. The shaking lasted just under a minute and caused several buildings in the city to collapse. Dozens of fires started, mostly as a result of underground gas lines broken from the earthquake. Two of San Francisco's three major water mains also broke, making fighting the fires throughout the city nearly impossible.

The devastation to the city increased as the Mayor of San Francisco ordered military and law enforcement personnel to use dynamite to put fires out and it wasn't until nearly a week later that the fires eventually subsided. By this time, about 80% of the city had either burned down or been blown up, and some 3,000 people were dead. The total cost of the disaster was around 400 million dollars, a price tag equivalent to the entire national budget at that time (Dellasandro, 2006).

Provenance: Library of Congress Prints and Photographs Division Washington, D.C. 20540 USA http://www.loc.gov/pictures/resource/ppmsca.05595/
Reuse: This item is offered under a Creative Commons Attribution-NonCommercial-ShareAlike license http://creativecommons.org/licenses/by-nc-sa/3.0/ You may reuse this item for non-commercial purposes as long as you provide attribution and offer any derivative works under a similar license.

Appointed as head of the State Earthquake Investigation Commission (later known as the Lawson Commission) and leading the investigation of the San Francisco earthquake was Andrew C. Lawson, a professor from the University of California, Berkeley. Also on the commission was Harry Fielding Reid, a professor from Johns Hopkins University in Baltimore, Maryland. Once interested in the science of glaciers, Reid's interests changed after being appointed to the Lawson Commission and he became a great contributor to the discipline of seismology and the deformation of Earth's crust (Lawson & Byerly, 1951).

Reid's research on the San Francisco earthquake looked at survey data collected over several decades (Figures 1a-1c). During a survey from 1851-1865, markers were set from west to east across the San Andreas fault. These survey markers were again measured in a second survey in 1892. The commission again measured these markers after the 1906 event. From this last survey, Reid found relative displacement of about 4 meters on each side of the San Andreas fault, along a section of several kilometers (Figure 1c). But, it was Survey II marker locations that were perhaps most puzzling. Reid observed that the 1892 survey markers showed a gradation of displacement, from no displacement where the survey line crossed the fault, to a gradually increasing distance of a couple of meters several kilometers away from the fault (Figure 1b).

Hide
Figure 1. Here are three schematic drawings of survey markers at three different times. (a) Survey I (1852) would show markers (fixed points on the ground) in a straight line across the fault. (b) Survey II (1892) found a displacement of the survey markers and a distortion of the survey line. (c) Survey three (1906), after the San Francisco earthquake, found the markers to be displaced (to the north on the west side of the fault), but the survey line was no longer distorted. [Credit: Glenn Dolphin]

Provenance: Glenn Dolphin
Reuse: This item is offered under a Creative Commons Attribution-NonCommercial-ShareAlike license http://creativecommons.org/licenses/by-nc-sa/3.0/ You may reuse this item for non-commercial purposes as long as you provide attribution and offer any derivative works under a similar license.

Based on the combined survey data Reid made the observations below (Reid, 1910).

● The strain, or deformation of the bedrock (seen by the curved path of the survey markers in survey II) decreased further east and west of the fault line.

● The displacement in the path of survey markers observed in survey III decreased north and south along the fault, away from the epicenter

● The displacement occurred suddenly, ruling out a gradual compressional or extensional force to cause this pattern of deformation.

● Because displacement was horizontal, the force could not be gravitational. Gravity would be responsible for vertical displacements.

● The Farallon Islands, far west of the event, showed the 6 meters of displacement, but none of the strain.

The way Reid interpreted the data (see Figure 2 below) was to assume a time of no displacement across the fault (a). After the first survey, the ground deformed in response to horizontal displacement; west of the fault moved in a northerly direction, and east of the fault moved in a relatively southerly direction. Deformation akin to bending a large stick accommodated the gradual buildup of strain. Eventually, the deformation (strain) was too much for the strength of the rock and the rock broke along the fault (c). When the rock broke, the energy stored in the strained rock was released as the rocks on either side of the fault elastically returned to their normal, unstrained structure. 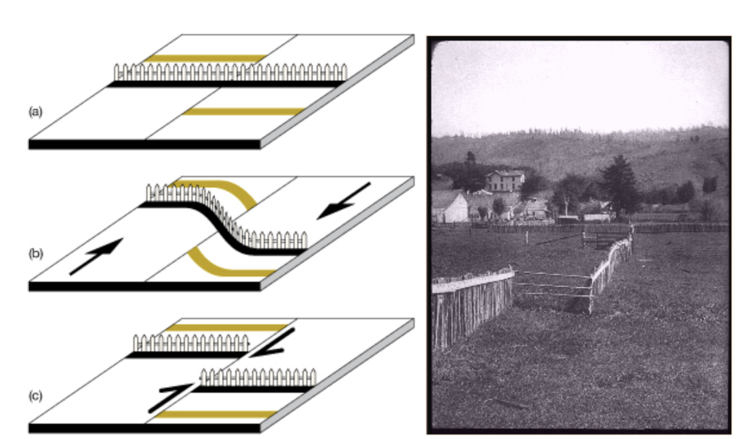 Hide
Figure 2. Diagram showing Reid’s idea of gradual strain (b), causing deformation in the crust until the crust broke and rock on each side of the fault rebounded, releasing stored elastic energy. http://www.iris.edu/gallery3/general/posters/CenturyofEarthquakes/FenceFigure. The picture on the right shows actual offset of a fence crossing the San Andreas Fault. http://earthquake.usgs.gov/regional/nca/1906/18april/reid.php

Provenance: Glenn Dolphin
Reuse: This item is offered under a Creative Commons Attribution-NonCommercial-ShareAlike license http://creativecommons.org/licenses/by-nc-sa/3.0/ You may reuse this item for non-commercial purposes as long as you provide attribution and offer any derivative works under a similar license.

What Reid developed was an innovative concept he referred to as elastic rebound in rocks as the mechanism for causing earthquakes. This idea continues to be our main understanding of how earthquakes happen. With the development of any explanation of a phenomenon comes the ability to predict or forecast future events related to that phenomenon. By understanding that earthquakes happen due to a failure in rocks that have exceeded their elastic deformation potential (they were stretched too far and finally broke), we can now look in places showing such elastic strain and determine probabilities of timing, location, and magnitudes of future earthquakes.

Reid, H.F., 1910,The Mechanics of the Earthquake, The California Earthquake of April 18, 1906, Report of the State Investigation Commission, Vol.2, Carnegie Institution of Washington, Washington, D.C.

Comment? Start the discussion about ONLINE EXTRA: The History of Elastic Rebound Theory: How a Big Disaster Helped Us Better Understand How the Earth Works