Imagine if your students were able to design their own planet by choosing parameters such as distance from the sun, tilt of the axis of rotation, and greenhouse gas concentrations, and then set up their own topography and bathymetry. In an ideal world, they would be able to do this on a website by entering this data and then clicking a button to run a climate model in the background. Later, they could return to see images of this dynamic, individualized planet. The results would encourage them to explore their own ideas and engage the general public in learning about the processes that drive Earth's climate. Sounds fun, right? 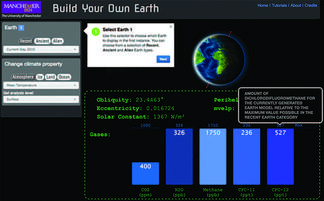 ×
Figure 1: Screenshot of the Build Your Own Earth splash screen, showing the interactive tour for new students as well as the mouse-over menu explaining each greenhouse gas category. Mouse-over menus are also present to demonstrate the concepts of axial tilt and solar constant.

Provenance: JONATHAN FAIRMAN et al, University of Manchester
Reuse: This item is offered under a Creative Commons Attribution-NonCommercial-ShareAlike license http://creativecommons.org/licenses/by-nc-sa/3.0/ You may reuse this item for non-commercial purposes as long as you provide attribution and offer any derivative works under a similar license.
That was our original vision: to create a dynamic live interface for users and take advantage of a large user base of budding Earth scientists to pursue scientific questions about the Earth's climate system. Unfortunately, we are not quite able to do that yet with our current technology. Even using a simplified model with 32 processing cores, we are only able to produce 480 years of a climate model simulation in a day. Numerous students operating the model at the same time would swamp a supercomputer. Creating graphical output alone can take an hour on a single processor.

Instead, we scaled back this vision by preselecting different versions of Earth, performed the simulations offline ourselves, and created a full suite of visualizations, which are readily available for classroom use at the click of a mouse. The result is Build Your Own Earth (http://www.buildyourownearth.com). Build Your Own Earth provides 50 different simulations of Earth or Earth-like planets. Experiments include those that vary the greenhouse gas concentration, solar constant, and orbital parameters. Other experiments include idealized alien planets and ancient versions of Earth from the geologic past. Build Your Own Earth uses the Fast Ocean–Atmosphere Model (Jacob et al. 2001) for its operation, and all simulations are run for 50–300 years until they reach an approximately stable climate. The website provides students with an opportunity to compare different types of experiments that they might imagine creating on their own. 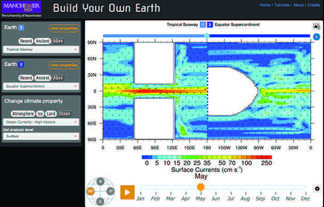 Hide
Figure 2: Screenshot of the interface that allows comparison between two different simulations of idealized “alien” Earths. There is a strong westerly surface current present for the tropical seaway case that is broken up by a supercontinent at the equator, reducing the poleward circulation on the planet.

Provenance: JONATHAN FAIRMAN et al, University of Manchester
Reuse: This item is offered under a Creative Commons Attribution-NonCommercial-ShareAlike license http://creativecommons.org/licenses/by-nc-sa/3.0/ You may reuse this item for non-commercial purposes as long as you provide attribution and offer any derivative works under a similar license.
Build Your Own Earth has been used as an electronic resource in a massive online open course on Coursera.org titled "Our Earth: Its Climate, History and Processes" (https://www. coursera.org/ourearth), as well as at the University of Manchester's on-campus course EART10111: Planet Earth, a required course for all first-year geoscience majors. Each year, the simulations in Build Your Own Earth have inspired one or two undergraduate students to develop theses projects based on climate modeling. The simulations have also contributed to a paleoclimate research collaboration investigating Jurassic climate, 170 million years ago (Gugliotta et al. 2016).

We invite further collaborations with this tool, as well as any feedback, as we make plans to expand and grow the portal in the future. The tool is freely available for all to use and incorporate in classroom teaching. We would welcome hearing examples of how you use it!