MARGARET MOONEY is the director of education and public outreach at the The Cooperative Institute for Meteorological Satellite Studies based at the University of Wisconsin, Madison, Wisconsin. 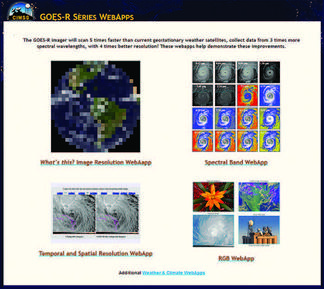 ×
Webapps developed by the Cooperative Institute for Meteorological Satellite Studies (CIMSS) in collaboration with NOAA's Advanced Satellite Products Branch will help CIMSS train National Weather Service forecasters in 2017. They are also important new tools in the "GOES-R Education Proving Ground," a CIMSS project that works with middle and high school science teachers who are using satellite data in their classrooms.

The Geostationary Operational Environmental Satellite-R Series (GOES-R) is the nation's next generation of geostationary weather satellites. Launched on November 19, 2016, and renamed GOES-16 when it reached operational orbit, the GOES-R satellite is part of a four-satellite program that will extend the availability of the operational GOES satellite system through 2036. The Advanced Baseline Imager (ABI) on GOES-16 scans five times faster than current geostationary imagers with four times better resolution while sampling three times more spectral wavelengths. The new webapps from CIMSS help demonstrate these improvements.

Currently there are four new webapps, ranging from simple to sophisticated, located online at http://cimss.ssec.wisc.edu/education/goesr/webapps.

The Image Resolution WebApp, playfully named "What's This?" allows users to adjust the number of pixels in different images to consider the effect of resolution on our ability to interpret data.

Another version of this WebApp allows the user to adjust both temporal and spatial resolution while exploring hurricanes, storm convection, clouds, fires, smoke, and pyrocumulus formations.

The Spectral Band WebApp enables exploration of the additional wavelengths of radiation sampled by the ABI. This activity features examples from previous GOES satellites, simulations of GOES-R ABI data, and imagery from Japan's Advanced Himawari Imager (AHI). By choosing ABI or AHI, the user can view images in the 16 spectral radiation bands found on ABI, each of which includes a short description associated with the band number, or wavelength. Other features include a pop-up chart that relays the percent reflectance in the image and temperature emitted by clouds our ground surface in the various pixels in each image. There is also an option to toggle annotations to aid in identification of features such as those common in a thunderstorm or hurricane.

Finally, there is the RGB WebApp or "Red, Green, Blue" processing application, which consolidates data from different spectral bands into a blended colorized RGB image. This allows one to explore, via an interactive tool, how meteorologists combine satellite data from different spectral bands to create a blended colorized image that often provides more information than individual images. It even includes a realtime data option where users can combine spectral bands from seven different geostationary satellites to make an RGB.

Other resources associated with the GOES-R Education Proving Ground include lesson plans, a media toolkit, archived webinars, and more. All are freely available at http://cimss.ssec.wisc.edu/education/goesr/.