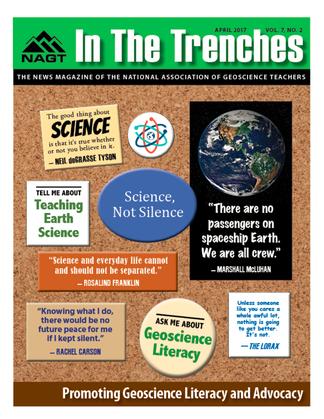 Hide
From Earth Day to the March for Science, science is in the news. Recent social and political discourse provides geoscience educators with an opportunity to open broader conversations on improving science literacy and advocating for science-supported policy. [Image by Nancy Ashmore]

Science is more politicized now than perhaps at any time in living memory. Many scientists and science educators feel that the scientific enterprise and science education are under attack, especially as "alternative facts" and fake news proliferate, threatening both our democracy and our environment. How do we at NAGT respond appropriately as an organization and as individuals? Read ...

Steven Newton, the National Center for Science Education and the College of Marin

"I wrote what you expected, but I want to let you know that I don't believe in plate tectonics."
The quotation above is the curious statement that greeted me at the end of a final exam in one of my introductory geology classes. One might presume that such a student bombed the test, but the truth is this student wrote an exemplary, fact-rich final exam essay on plate tectonics, earning full marks and an A in the course. I was nevertheless left with a sense of deep unease and this question: How could someone who knew the facts so well reject the existence of plate tectonics? Read more...

Today in America, scientists are being challenged on a wide range of topics labeled as "controversial." The most divisive topics that I encounter deal with the scientific theories and consensus related to the age of the earth, evolution, radiometric dating, environmental protection, human overpopulation, and global climate change. Read more... 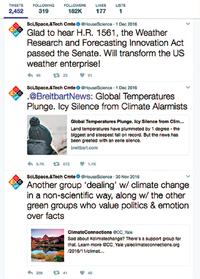 ×
Credible Sources and Science Literacy: The Role of Social Media

Science educators are tasked with teaching students critical thinking skills and how to collect and interpret data in the pursuit of solving problems. Within that pursuit, these educators are faced with the growing challenge of making sure that students know how to identify credible sources of scientific information — especially with information available at their fingertips (e.g., smartphones). Read more... 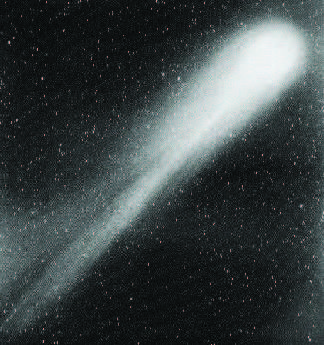 Mary Koppal and Jo Ellen Roseman, American Association for the Advancement of Science

Project 2061 is a long-term initiative of the American Association for the Advancement of Science (AAAS) to help all Americans become literate in science, mathematics, and technology. AAAS launched Project 2061 in 1985, the same year that Halley's Comet was last visible from Earth. Since then the world has seen incredible advances in science and technology that have transformed the way we work and live. Children starting school now will see the return of the comet in 2061. What kind of education will they need to prepare them for a future in which science and technology continue to shape the world in ways that we cannot predict? Read more...

If there's anything that unites educators across the disciplines, it's the recognition that the emerging "post-truth" or "alternative-fact" nonsense is dangerous, and that the university is a space in which it should be resisted. Read more...

A popular term amongst climate science folks is "tipping point". Late last year we saw a series of political tipping points that raise serious questions about the future of efforts to deal with hazardous climate change. For those of us engaged in geoscience education the impact of these tipping points on climate education is equally problematic. In addition to the uncertainty of continued institutional and public support for our efforts, there are a great many questions about the fate of the vast collection of climate/environmental data and educational resources now on federal servers. How much of this collection will be dismantled? How much will be discarded? What will replace it? Read more...

The Role of the Affective Domain: Teaching Controversial Topics »

If a contentious topic doesn't sit well emotionally, then students may be unable to learn the science. This part of the On the Cutting Edge website addresses how to approach controversial topics with the Affective Domain in mind, not just the Cognitive Domain.

A Structured Academic Controversy (SAC) is a type of cooperative learning strategy in which small teams of students learn about a controversial issue from multiple perspectives. This module from Pedagogy in Action explains the What, Why, and How of using this pedagogic method in the classroom.

Climate Education in an Age of Media (CAM) »

The CAM project is developing approaches to bring student media production into climate change education in ways that are engaging, empowering, and can be readily adopted in a wide range of instructional environments. Student media-making can be used to overcome many of the challenges that climate change education presents and is an excellent way to bring active, social, and effective learning to one of the most important and most complex problems facing human society today.