FRANK D. GRANSHAW (fgransha@pdx.edu) is an adjunct faculty member in the Department of Geology at Portland State University, Portland, Oregon.

A popular term amongst climate science folks is "tipping point". Late last year we saw a series of political tipping points that raise serious questions about the future of efforts to deal with hazardous climate change. For those of us engaged in geoscience education the impact of these tipping points on climate education is equally problematic. In addition to the uncertainty of continued institutional and public support for our efforts, there are a great many questions about the fate of the vast collection of climate/environmental data and educational resources now on federal servers. How much of this collection will be dismantled? How much will be discarded? What will replace it?

Though the extent of these changes remains a nagging unknown, the future vision for science resources may be alluded to within the replacement of the previous administration's statement on climate and energy (White House, 2016) by the current administration's statement on much the same topic (White House, 2017). Given this new direction there have been a number of national and international data refuge efforts (PPEH Lab, 2017) to back up the on-line federal resources related to climate and environmental protection. The goal of these efforts is to place copies of this information in secure servers before it is lost to the scientific and educational communities, as well as the general public.

For those of us in the geoscience education community, a major task is locating the newly created archives - a significant problem given the speed with which they had to be assembled. The second, more daunting, problem is providing students with a portal that enables them to find resources in those archives that they can use in introductory climate and environmental science courses - an issue complicated by the crisis management nature of the archiving work. My recent request posted to several geoscience and climate education listservs for information about the existence of such portals revealed considerable interest in having such a portal, a few links to individual archived sites and data refuge efforts, but no gateways that would be readily useable by students in introductory high school and college courses.

This leaves our community with the critical task of building such a gateway. To encourage this process I have created an example of what such a gateway might look like (Granshaw 2017). I am also encouraging readers interested in helping with this project to visit the discussion thread provided by NAGT for discussing the questions raised in this article http://nagt.org/nagt/about/discussions/climate_data.html.

Important questions to consider when joining this discussion include the following... 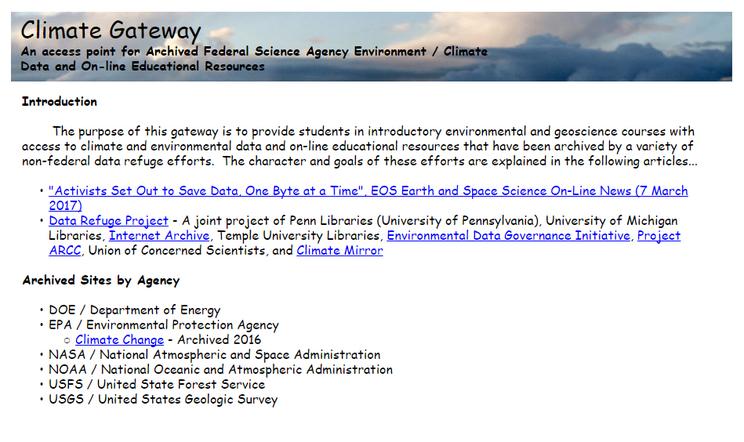 As of this writing the extent and nature of the changes to occur in federal science agencies and the resources from them that our students use are still major unknowns. At this time there has been little change in the pre-December on-line resources and the new directors for those agencies are only beginning their work. Given this it is tempting to take a wait and see attitude so as not to appear alarmist. But our experience of the past few weeks is that massive and sometimes disruptive change can occur very quickly in the new political reality. Since this new administration has demonstrated somewhat disconcerting opinions about environmental and climate issues it is only prudent that our community works to ensure that our students continue to have access to the science provided by past agency work.

White House, 2016, A Historic Commitment to Protecting the Environment and Addressing the Impacts of Climate Change, https://obamawhitehouse.archives.gov/the-record/climate