Credible Sources and Science Literacy: The Role of Social Media 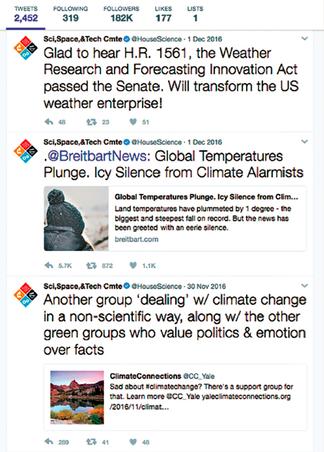 ×
Science educators are tasked with teaching students critical thinking skills and how to collect and interpret data in the pursuit of solving problems. Within that pursuit, these educators are faced with the growing challenge of making sure that students know how to identify credible sources of scientific information — especially with information available at their fingertips (e.g., smartphones).

This challenge has been further compounded in 2017 by different state legislative agendas. For example, the South Dakota legislature considered a bill (which did not pass) that would have allowed teachers to cover the strengths and weaknesses of leading scientific theories. While skepticism is a cornerstone of the scientific process, so too is the ability to accept the results of well-designed inquiry; breeding unnecessary skepticism may only stifle the scientific process (Biddle & Leuschner, 2015). Other "anti-science" bills and resolutions have been introduced in Indiana, Oklahoma, and Texas. Idaho's legislature is considering the removal of climate change from its science standards and thus intermingling political motivations with the academic process. Such legislative challenges threaten the scientific literacy of present and future generations.

In 2016, the U.S. House of Representatives' Committee on Science, Space and Technology retweeted a climate change article that contained scientifically inaccurate, opinionated information (ironically, the writer of the article is not a scientist, but rather a satirist). The danger of this tweet cannot be overstated, considering the finding of a Stanford University study that middle school, high school, and college students have a difficult time identifying "fake news" (Wineberg & McGrew, 2016). Increasingly, students prefer to get their news and other information from social media (Facebook, Twitter, etc.), where that information can be shared instantly. People tend to interact with others on social media who share similar views (creating what are called "echo chambers"), and in some cases, computer algorithms can filter or direct people to specific content based on their preferences, resulting in news feeds that are narrowly and politically defined (Bakshy et al., 2015).

Determining credible from non-credible sources proves to be more challenging with social media compared to typical mass media (T.V., newspapers) which strives to meet standards that result in a high level of integrity (Westerman et al., 2014). Social media platforms can be maintained by anyone, whether they follow the rules of ethical journalism or not. As a result, biased information is easily spread. For example, anti-climate change lobbyist groups have spread pseudo-scientific reports suggesting that there is major disagreement among scientists about the causes of climate change when in fact there is none (St. John, 2013). These reports are easily found on the Internet, shared on social media, look similar to credible reports, and thus easily deceive the public on this critical issue.

Students today are not solely engaging with content just to be informed; they are also looking to communicate their own thoughts about the information that they have just encountered.

Despite the growing difficulty of these challenges, educators have the power to tackle them head-on. Science educators should develop lessons and lectures rooted in the philosophy that birthed their discipline:

In practice, the resources available through Interdisciplinary Teaching about Earth for a Sustainable Future (InTeGrate; http://serc.carleton.edu/integrate/teaching_materials/modules_courses.html) offer exercises that immerse students in using and obtaining credible data. The Map Your Hazards module (http://serc.carleton.edu/integrate/teaching_materials/map_hazards/index.html) has a tutorial in credible data that helps to answer how scientific data is collected and evaluated in a reliable manner.

Having a discussion with students about credible sources of information is crucial. In my (Sweeney's) own experience, students enjoy working together on InTeGrate module activities and are often surprised to learn geologic information about the places they live. What is most valuable is that they realize that effective problem solving can only occur with accurate data.

How educators distill and deliver information to the current generation of students is also critical. While students might crave a superficial overview of the content, the role of the professor is to not only deliver information but challenge how students think about the world. The tedious examination of facts is often necessary for some students to make connections in the classroom and ultimately succeed in developing a deeper understanding of the material. Techniques for delivering those facts could use some updating. Active learning strategies have been shown to increase student understanding and engagement in STEM fields (Freeman et al., 2014). Strategies vary, but include summarizing key topics through the use of short videos, such as ones on the GeoScience Videos channel on YouTube (https://www.youtube.com/channel/UCtQfVk8PDyHU6e9q_1cEY0Q) or the Earth Rocks videos of City College of San Francisco (https://www.ccsf.edu/en/educational-programs/school-and-departments/school-of-science-and-mathematics/earth-sciences/Courses/EarthRocks.html). Information producers have found that the key to successfully engaging students today is by creating content that is accessible from anywhere, is easily shareable, and encourages discussion (Fleming, 2015).

It is important to note that students today are not solely engaging with content just to be informed; they are also looking to communicate their own thoughts about the information that they have just encountered. In the comment sections of delivery channels that successfully meet these demands, one will find an active discussion between producers and their audience. Ultimately, students are seeking visually appealing and engaging content. For example, the Facebook page Geomorphology Rules, managed by Dr. Kathleen Nicoll at the University of Utah, engages her students as well as the community at large about the "science behind the scenery." Students are asked to make observations and interpretations about geological landscapes and processes and discuss what they see. Governmental agencies such as the USGS are also using Facebook as a means to share science with the public and put faces to science by highlighting the jobs of scientists who work there.

Beyond the delivery and sharing of information in the classroom, professors involved in research, some of which includes the participation of students, stand to benefit themselves, their students, and the general public by sharing their results through means other than typical media releases. In some cases when new research is published for a wider audience, it is not accurately portrayed by the media and becomes sensationalized to attract readership (Askland, 2009). A possible solution to this problem is to provide an outlet that maintains objectivity and stays true to the research, yet is attractive to younger audiences. Therefore, creation of a publicly accessible media outlet that works with research departments to publish reliable, aesthetically considerate, easily shareable multi-media content stands as an opportunity to alleviate some of the aforementioned concerns in an effective fashion. We plan to experiment with making short and engaging videos showcasing faculty research in the near future.

Universities are quite capable of producing reliable information that is relevant to their home communities and of delivering that content in the way consumers (students) demand. Some might argue against the visual approach, saying that appealing video content found online is sensationalist and merely an attempt to distract from the merits of the arguments. However, this criticism stems from an association fallacy; information can be enjoyable to learn as well as objective and educational. For example, a variety of academic and scientific content is delivered on YouTube channels such as MinuteEarth, CrashCourse, and IRIS EPO. Some textbook publishers are also including short videos to supplement student learning.

Social media is renowned for two-way communication between the producers of content and the audience and is therefore a place to build relationships (Shan et al., 2015). If university research professors are willing to relay the results of their scientific studies through this means, then they become more approachable, effective teachers as opposed to mere publishers of their content. In the end, students, researchers, and educators have a lot to gain from engaging with social media in the sharing of information. Students benefit from a greater appreciation for science spoken in their language, which might even lead to heightened interests in STEM fields. Researchers gain by sharing their work with the public and allowing the public to interact with them. Educators gain by having greater student engagement and material retention, all without reducing the rigor of their courses. The more educators and researchers can insert themselves into the generation and dissemination of credible sources of information, the better chance we have of shaping a scientifically literate populace.

Biddle, J.B., and Leuschner, A., 2015, Climate skepticism and the manufacture of doubt: can dissent in science be epistemically detrimental? European Journal for Philosophy of Science, v. 5(3), p. 261-278.