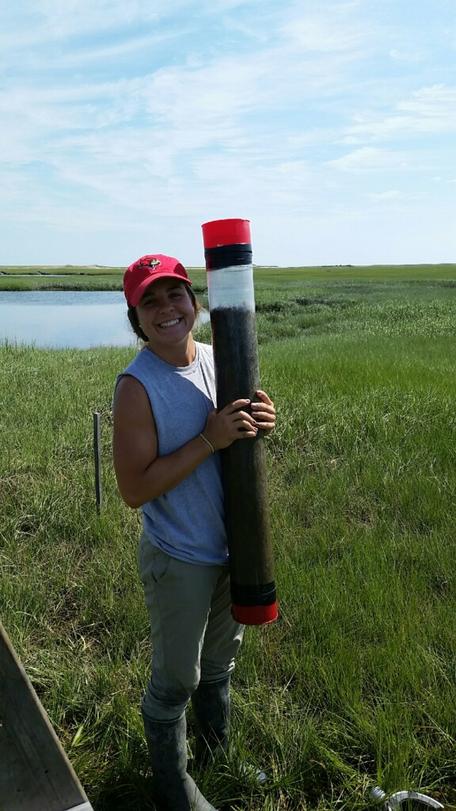 ×
I am holding a sediment core we extracted from a salt marsh in Cape Cod, MA.

Reuse: This item is offered under a Creative Commons Attribution-NonCommercial-ShareAlike license http://creativecommons.org/licenses/by-nc-sa/3.0/ You may reuse this item for non-commercial purposes as long as you provide attribution and offer any derivative works under a similar license.

I worked on Carbon Burial in Salt Marshes following Tidal Restriction: A Case Study from Cape Cod, Massachusetts. My mentor was Meagan Gonneea, and I worked at the USGS in Woods Hole, MA. The project focused on comparing carbon sequestration between restored and natural marshes, and I gathered data from 8 different salt marshes on the outer cape. I helped collect and cut some of cores for this project. Most of the cores were collected last summer, so I was in charge of age dating the sediment from the cores as well as analyzing the sediment for percent carbon using CHN analysis. After the lab work was finished, I calculated carbon densities for different depths of each core as well as carbon accretion rates from 1900-present.

The most memorable part of the work was being involved in all aspects of the project. I participated in the field work of collecting the cores, prepared the cores in the lab for analysis, as well as analyzed the data. Meagan was an amazing mentor and talented, passionate scientist. Working with Meagan was one of the best experiences of my scientific career thus far!

My career goals before I started this internship were to eventually become a university professor or a research scientist at the EPA.

How the program contributed