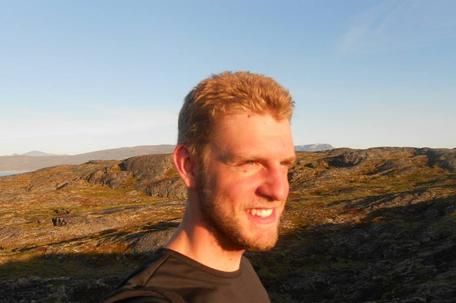 Provenance: Claire Branigin, Carleton College
Reuse: This item is offered under a Creative Commons Attribution-NonCommercial-ShareAlike license http://creativecommons.org/licenses/by-nc-sa/3.0/ You may reuse this item for non-commercial purposes as long as you provide attribution and offer any derivative works under a similar license.

I worked on a variety of ecology projects under the leadership of Kristen Hart, PhD, and Mike Cherkiss, USGS, University of Florida, Davie, FL.
I assisted in an investigation of sea turtle nesting patterns Gulf Shores, AL and in south Florida, conducting night beach surveys for nesting females. I helped with catch and release of the nesting mothers, and collected tissue and blood samples and other measurements. We attached GPS tags to some turtles, for continuous location monitoring.
I also assisted in a project to investigate distribution of invasive species in the Florida Everglades. I joined in a field tracking excursion of a GPS tagged adult Burmese python. I also assisted in construction of large constrictor holding facility. In an investigation of distribution and feeding patterns of invasive Tegu lizards, I performed necropsies of captured and euthanized specimens.
I also assisted in the study of American crocodile nesting patterns in the Florida Everglades. I helped conduct night surveys and tagged hatchling crocodiles for survey purposes.

The most memorable part of this work was the hands-on experience with the animals, in particular, the sea turtles. The second or third night of turtle surveying in Alabama, I was riding with Dr. Hart along the beach, and we spotted a big, beautiful Loggerhead turtle, just returning from nesting. We stopped the UTV, turned out the lights, and approached the turtle slowly but purposefully. Dr. Hart's smooth, experienced methodology had the turtle enclosed and ready for measurements in just minutes. As soon as we started to take blood samples, though, the huge animal decided she would rather not sit still. After wrestling the reptile for a few minutes, Dr. Hart looked at me with a gleam in her eye and said, "Think you can sit on her?" And there I found myself, under a gorgeous Alabama moon, reflecting off the smooth Gulf water, sitting on a sea turtle, thinking, "My friends won't believe this!"

At the time of the internship, my goals were to enter and finish a Master of Science program in Geology at East Carolina University, then seek employment in science or science education.

How the program contributed

The internship was extremely helpful as a way to show me how real science is done, and how exciting it is to be a part of it. Professionally speaking, the variety of experiences I was given under the guidance of Kristen Hart and Mike Cherkiss helped tremendously in standing out as a candidate for employment in a science education position.