The common organization of curricula into "key topics" often encourages a focus on learning the key scientific models rather than on learning the practices of science on which those models were based, such as observation, interpretation, and arguing from evidence. It is important that students learn that they each have the power to test and verify the models themselves through these practices.

The lesson outlined in this article encourages students to think about how they can test the accepted model for phases of the Moon. This is a model first developed in antiquity and based on observations that any of us can make. This lesson can be appended to a more traditional exploration of the model for phases of the Moon. It engages students in making personal observations to test the validity of the model and in arguing on the basis of their own observations whether the model is correct. This lesson is divided into four conceptually-simple steps whose complexity can be tailored to the age and ability of the students. It can take anywhere from three to ten class periods plus a 1-month period for watching the Moon outside of class.

Introduce students to the model for the formation of the Moon in whatever way that you typically do. It is important that you consider the view of the model as seen from the Earth as well as the traditional view as seen from space.

Provenance: Alexis Walters, Carleton College
Reuse: This item is offered under a Creative Commons Attribution-NonCommercial-ShareAlike license http://creativecommons.org/licenses/by-nc-sa/3.0/ You may reuse this item for non-commercial purposes as long as you provide attribution and offer any derivative works under a similar license.
Propose an alternative model against which the accepted model can be compared, such as the alternative 'Pendulum Moon' model given in Table 1, Lesson Step 1. This gives students a 'wrong' model to help them see how observations can be used to disprove a particular model. You might encourage students to come up with their own models for the phases of the Moon. This gives them practice thinking about model construction.

Having students develop their own models also provides an opportunity to help them understand that, to be scientific, models need to meet certain criteria. For example, they must be based on previous observation and be testable or falsifiable with future observation. To help students know how to check that their models are scientific models, you might give them an example of a non-scientific one. For example, the model that ancient aliens built a planetarium-like projection system around the Earth that creates the illusion of the phases of the Moon matches any possible observation equally well and so can't be tested by any observation made from the surface of the Earth (although it might be possible to test by going into space and seeing if there is a projection system there). Because it can't be tested by observation, it may not be a scientific model.

2) Identify Predictions of the Model which can be Tested 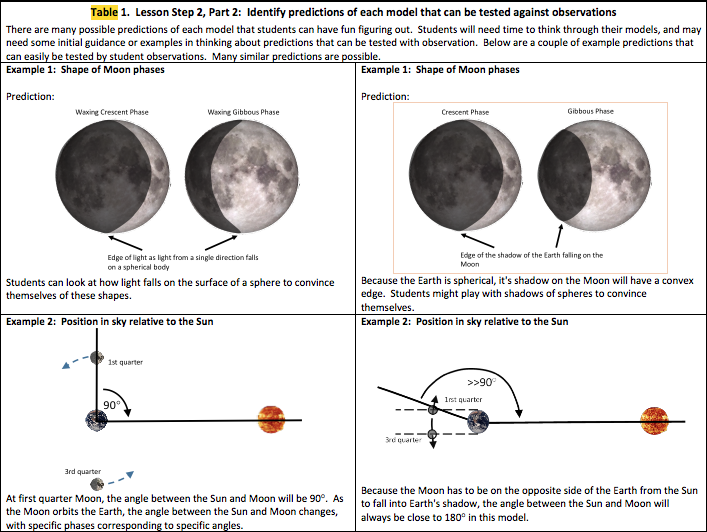 Provenance: Alexis Walters, Carleton College
Reuse: This item is offered under a Creative Commons Attribution-NonCommercial-ShareAlike license http://creativecommons.org/licenses/by-nc-sa/3.0/ You may reuse this item for non-commercial purposes as long as you provide attribution and offer any derivative works under a similar license.
Ask your students to identify predictions that the model makes which can be tested by making future observations. To help get students started, you might provide some examples such as those in Table 1, Lesson Step 2. There are two different kinds of predictions given in Table 1, Lesson Step 2. The first looks for key observations which, if made, would prove the model wrong, or at least incomplete. The second makes predictions that, if observed, would support the model. Many predictions other than those given in the table are possible, although most will be related either to the shape of the Moon phase as seen from Earth, or the position of the Moon in the sky relative to the position of the Sun or the time of day.

In general, students need to develop a thorough understanding of the details of a model in order to make reasonable predictions to test. In the case of phases of the Moon, they need to be able to visualize in three dimensions what the implications of the model are for what we see here on Earth. This may require some practice and use of three-dimensional visualization tools such as classroom physical models or computer animations.

3) Make Observations to Test the Model

Students can make a variety of observations over the course of a month to test the particular predictions they develop in lesson step 2. These observations will generally entail looking at and sketching the appearance of the Moon during different phases, tracking how those phases change with time, and recording the position of the Moon at each phase relative to the position of the Sun. The exact measurements and observations students make might vary depending on the particular predictions students are trying to test and the age of the students. The observations needed for the example tests proposed in this article are given in Table 1, lesson step 3. 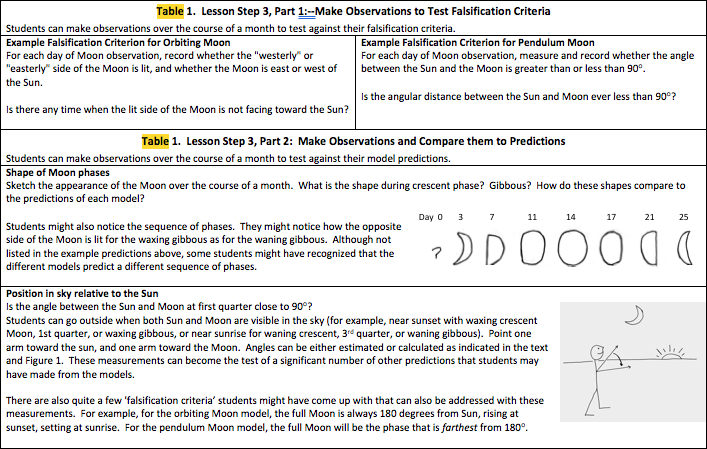 The angular distance between the Moon and the Sun can either be estimated visually (for example, by comparing the apparent angle with a protractor, or by breaking angles into parts, 45° degrees will be half of 90°, 22.5 °will be half of 45°, 11.25° will be one fourth of 45°), or by measuring the length of arms and the distance between hands in the method shown in the Figure 1. 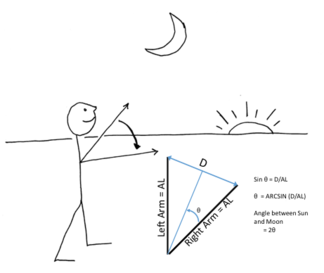 Hide
Figure 1. The angular distance between the Moon and the Sun can be roughly calculated by trigonometry by taking measurements as shown below, or even more roughly by mentally breaking angles into parts, 45° degrees will be half of 90°, 22.5 °will be half of 45°, 11.25° will be one fourth of 45°.

Based on their own observations, students argue whether models are supported, disproven, or not addressed by their data. It's important that students use their own observations, not observations provided to them by others. It's also important that they argue from evidence, not from the model itself. For example, in the alternative model proposed in Table 1 in which the Moon swings like a pendulum back and forth through the Earth's shadow, it is not valid reasoning or valid science to argue that 'we know this can't be right because the Moon orbits the Earth.' This is an argument based on the model itself, and as such it constitutes circular reasoning. Instead, students should practice arguing from actual observations that they made, not from the models that other people have handed to them.

Although the model for the phases of the Moon originated in antiquity, we know that Greeks proposed a geometrical model for Moon phases at least two generation before Aristotle (Sagan, 1980, pp 181-1830). The writings of Aristarchus (done sometime before 216 BCE) inferred the Moon's geometric position around the Earth based on understanding of its phase (Archimedes, trans. 1956). Collectively these documents reveal that the Greeks had a sophisticated model of Moon phases more than 2200 years ago.


Testing Models through Personal Observation: Phases of the Moon -- Discussion