Investigative Classroom Science: A Cure for National Skepticism of Science?

"PEOPLE TRUST SCIENCE. SO WHY DON'T THEY BELIEVE IT?"

This news headline from the summer of 2017 (Dastagir, 2017) presents an interesting dichotomy: belief in particular aspects of science may not arise from a trust of science in general. Likewise, belief may not arise from a knowledge of the theories or a strong scientific reasoning ability (Kahan et al., 2012). Science constructs knowledge through empirical observation and reasoning, and any "belief" of science must rest on connecting models to observations. Often students don't make that connection. When I (Mary) ask my students why they believe a fact or conclusion is true, students often reply either "You told us" or "I read it online." When I ask them for the evidence given for a claim in a scientific article, they often cite contextual evidence in the writing, invoking the authority of the writer, rather than observational evidence reported in the article. Although science teachers often shun the word "belief," fearing its perceived association with faith, it's important to engage with the distinction between the ability to explain models and theories and the belief that those models and theories accurately describe reality. We argue here that beliefs about science may be changed if we help students navigate the messiness of doing science to discover some scientific theories for themselves. 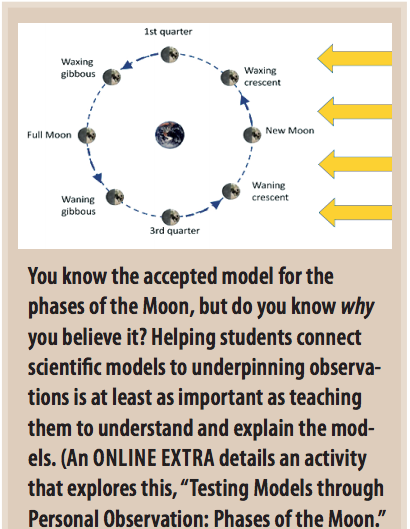 In February 2017, basketball star Kyrie Irving claimed to believe that the earth is flat, not round. In July 2017, an article in Rolling Stone suggested that Irving's claim from earlier in the year was already influencing young minds (Raferty, 2017). Bill Nye ("the science guy") weighed in on the discussion, saying that it's heartbreaking when people even joke about such things (Sostok, 2017a). How could anyone be so skeptical of an established science fact? Does this disbelief in science reflect a problem with our education system? Isn't it the teacher's job to ensure that students know and believe the scientific understandings accumulated over generations? Perhaps not. Science deals with figuring things out, not simply knowing and believing theoretical models someone else has figured out for us. This idea is consistent with the Next Generation Science Standards (NGSS) goal of "K-12 science education should reflect the interconnected nature of science as it is practiced and experienced in the real world" (NGSS Lead States, 2013). Perhaps the science educator's first priority is to equip students with the intellectual tools and applied experience to understand how to figure things out scientifically. By engaging students in the practices of science to make sense of their observations (NRC, 2012, p. 26), we give them not only an understanding of how to figure things out, but a trust that our scientific models are based on observations and reasoning.

An Explanation for the Skepticism?

Despite our goal of understanding science as a practice, science is presented in the classroom and in public forums such as the news media as established explanatory theories developed by the scientists, often without much examination of the evidence. This focus on conveying the models, even if done in understandable and memorable ways, can lead to a disconnect between observation and model. In my (Russ's) college classroom, students arrive from high school able to explain the theory of plate tectonics but not able to identify the evidence and reasoning behind our understanding of plate tectonic theory. Even after substantial classroom exploration of the theory, students, when asked for evidence, give answers such as "Continents of the earth have been moving such that they move apart in some areas and together in others. Thus the continents were once all together and so we know they must have moved." Such circular reasoning suggests a profound disconnect between student understanding of scientific theories and their understanding of the practices of science by which those theories were inferred from observational evidence. This disconnect might be due in part to the fact that we tend to organize classroom curricula around the big theoretical ideas we want to teach. We use activities and investigations to reinforce those theoretical ideas and help students understand them. Our primary goal in teaching science has been—and may still continue to be—making sure students can understand, explain, and apply the theories. But teaching students to explain theories is not at all the same as teaching them to do science. Might this approach of presenting science as authoritative theories to be understood and explained be a part of the reason for public skepticism of science? Unless people can make observations, do some testing, and develop and modify models on their own, why shouldn't they be skeptical of ideas "from the scientists"? Skepticism is in fact essential to valid scientific investigation. To quote from Kyrie Irving, "Anytime you have a specific question, like, 'Is the earth flat?' or 'Is the earth round?' I think you need to do research on it" (Sostok, 2017b). We tend to agree with him on that. Science deals with figuring things out from observations, not simply believing theories someone else has figured out for us.

An Example from the Earth Sciences

Consider an example goal from the Earth sciences: understanding the cause of the phases of Earth's moon. To help students understand the accepted model, teachers have an arsenal of engaging activities to illustrate, in a concise way, centuries of hard-won knowledge. Every textbook has an illustration of the model. There are great animations of the model online. Every Earth science activity book has suggestions for using lights and spheres to guide students through understanding how the model explains Moon phases. Through many creative and research-based educational practices, we teach how the Moon moves around the earth, how only half of the Moon is lit by the Sun, and how our perspective from Earth allows us to see different portions of the lit half of the Moon during different stages of the Moon's orbit. We teachers do a great job of helping students visualize, understand, and ultimately explain how the model works. We may even encourage them to make predictions or explain phenomena based on the model. What is it we don't do? We don't teach students how to develop a Moon-phase model from basic data and their own observations. Instead, we give students the model fait accompli and encourage them to accept it. Or not. Why shouldn't students remain skeptical of science in the absence of any first-hand investigative understanding of how we know the model is true? Given that people discovered the cause for Moon phases thousands of years ago, and they needed no telescopes, supercomputers, or other complex tools that might be outside the reach of a school classroom, it is particularly puzzling that we do so little to engage students in developing a model for themselves. Anyone can do it. Yet, few textbooks suggest how. Why don't we engage students more in the fundamentals of making observations and developing models? Instructional time is a significant factor. Developing a model for Moon phases based on observational data that students compile themselves takes a lot of in-class and out-of-class time. Prepackaged lessons, with the messiness of science stripped out, don't take as much instructional time. But we argue that teachers need to take the time for at least a few excursions into doing science. Engaging in the practices of science to make sense of phenomena is an idea supported by the Next Generation Science Standards (NGSS Lead States, 2013) and A Framework for K-12 Science Education (NRC 2012). The goal of teaching is not simply to convey the theories of science—the phases of the Moon or plate tectonics or the large-scale balance of energy that controls Earth's climate—but to develop students' abilities to pursue the practices of science through which those theories were developed. We offer a lesson in testing the Moon phase model as an online accompaniment to this article (Colson and Colson, 2018, "Testing Models through Personal Observation: Phases of the Moon"). Another activity engaging students in the construction of a model for phases of the Moon can be found in Colson and Colson, 2016, p. 272-274.

A Possible Cure: Making Science Discoveries Our Own

Discovery in science is often confusing and takes a lot of time. It took all of humanity thousands of years to figure out what we know today. Not wanting to create confusion, we teachers give students textbooks with clean, sanitized models and clear explanations free of the confusing messiness of evidence and arguments. In our striving to avoid confusion, we don't engage students in the difficult work of developing a model from initially unclear observations and experiments. They don't have the opportunity to make any of the scientific models their own. Students may understand the theories but have absolutely no reason to believe them because the models are something they have been told, not something they have figured out. There is not enough time for students in the classroom to figure out everything on their own. But in figuring out some ideas from basic observations, they can gain an understanding of how science proceeds and a confidence that it can lead to reasonable and believable conclusions. As suggested by Susan Yoon, professor at the University of Pennsylvania's Graduate School of Education, perhaps if teachers give students the tools to think like a scientist, they will come to the truth on their own (Arent, 2017).

Colson, R. and Colson, M., 2018, Testing models through personal observation: Phases of the Moon, In the Trenches, this volume, online version, found at https://nagt.org/nagt/publications/trenches/index. html.

Sostak, D., 2017b, Kyrie believes the earth is flat: "They lie to us": http://www.sportingnews.com/nba/news/ kyrie-irving-flat-earth-theory-channing-frye-richardjefferson-podcast/1lvjl8x9022e31n0l1cj3d03qi (accessed May 2018).