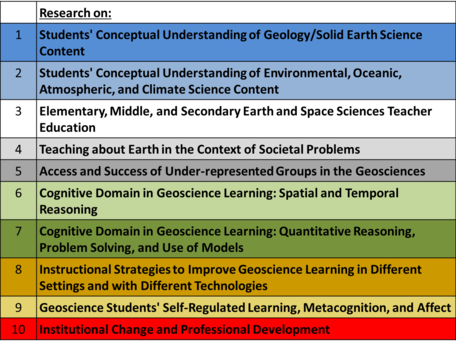 ×
Table 1. Themes that span the spectrum in which GER operates and have the potential to impact undergraduate geoscience teaching and learning.

Provenance: Kristen St. John, James Madison University
Reuse: This item is offered under a Creative Commons Attribution-NonCommercial-ShareAlike license http://creativecommons.org/licenses/by-nc-sa/3.0/ You may reuse this item for non-commercial purposes as long as you provide attribution and offer any derivative works under a similar license.

Fourteen ago the Wingspread Report (Manduca et al., 2003) helped establish geoscience education research (GER) as an important research field and highlighted major research questions for GER at the time. More recently, the growth and interest in GER is evident from the increase in geoscience education research articles, the establishment of the NAGT GER Division, the creation of the GER Toolbox, an increase in GER graduate programs, and the growth of tenure-eligible GER faculty positions. As an emerging DBER field (Singer et al., 2012), the GER community is examining the current state of their research and considering the best course forward so that it can have the greatest collective impact on advancing undergraduate teaching and learning in the geosciences.

As part of an NSF-funded effort to meet this need, 40 researchers drafted priority research questions, or "Grand Challenges", that span 10 geoscience education research themes (Figure 1). For each theme, several Grand Challenges and recommended strategies have been proposed. This draft framework has undergone one round of peer-review and is now ready for the broader community to critically examine. We seek perspectives from geoscience education researchers, scholars, and reflective educators.

The project goal is to engage the community in setting ambitious goals for geoscience education research (GER) that will be achievable within ten years and will have significant impact on undergraduate geoscience teaching and learning.

It is our vision that the final outcomes of this community-grounded process will be a published guiding framework to:

×
Figure 2. Major steps in the process toward defining GER grand challenges and strategies.

Provenance: Kristen St. John, James Madison University
Reuse: This item is offered under a Creative Commons Attribution-NonCommercial-ShareAlike license http://creativecommons.org/licenses/by-nc-sa/3.0/ You may reuse this item for non-commercial purposes as long as you provide attribution and offer any derivative works under a similar license.

The project involves a year-long process of community engagement (Figure 2).

An initial step in the process was to identify themes that define the spectrum in which GER operates and has the potential to impact undergraduate teaching and learning. The themes were informed by: focus group discussions at the 2015 GER workshop, results from the 2016 and 2017 GER Surveys, the DBER Report (Singer et al., 2012), the Wingspread Report (Manduca et al., 2003), the Earth in Mind II Synthesis report (Kastens and Manduca, 2012), and Lewis and Baker (2010, JRST).

The 2017 GER survey helped provide initial ideas on grand challenges and supplied recommended references on each of the topical areas. The results of the survey were reported to the community in a webinar and informed the summer GER workshop. The primary focus of the 2017 summer GER workshop (Figure 3), the GSA Town Hall, and Working Group efforts since the town hall has been to to articulate and prioritize grand challenges for each theme that are of high interest to the geoscience education researcher and practitioner community, and recommend strategies to address the prioritized grand challenges. The grand challenges are to be articulated as overarching research questions. The strategies should be ones that the community views as providing the strongest opportunities for rapid achievement of transformative GER.

×
Figure 4. Draft grand challenges and strategies were presented and critiqued by the other workshop participants and feedback was used to revise their work. Sharing and feedback also occurred in a preliminary community online survey, in a webinar, at the EER Geoscience Educator and Researcher Forum, at the GSA Townhall, in posters at the GSA, AGU, and AMS meetings, and during the online Open Comment Period.

Provenance: Kristen St. John, James Madison University; Heather Macdonald, College of William and Mary
Reuse: This item is offered under a Creative Commons Attribution-NonCommercial-ShareAlike license http://creativecommons.org/licenses/by-nc-sa/3.0/ You may reuse this item for non-commercial purposes as long as you provide attribution and offer any derivative works under a similar license.

Currently, the project is undergoing a period of review to get feedback from the community. Comments can be entered in the 'Discussion' box directly on the webpages for each of the ten topical areas of GER. The Open Comment period will end February 12, 2018. Working groups will then use the feedback to revise the chapters. The entire framework will be disseminated to the geoscience community, the geoscience education research community, the broader DBER community and NSF broadly via reports, open access online postings, and manuscripts.