Skip to Main ContentSkip to Navigation
Your Account
Author Profile 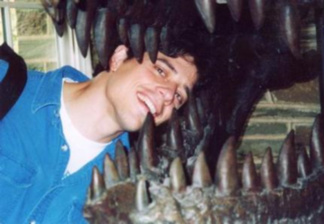 Provenance: Katherine Ryker, University of South Carolina-Columbia
Reuse: This item is offered under a Creative Commons Attribution-NonCommercial-ShareAlike license http://creativecommons.org/licenses/by-nc-sa/3.0/ You may reuse this item for non-commercial purposes as long as you provide attribution and offer any derivative works under a similar license.

Glenn Dolphin is the Tamaratt Teaching Professor in Geoscience at the University of Calgary in the Geoscience Department. He is formally trained as a geologist, and specializes in qualitative research methods of GER. Read more about his publications, research interests, and recent work.

I have an awesome job! Formally trained as a geologist, I have worked in the groundwater industry, taught Earth Science to ninth grade students in New York, received a PhD in science education and began my position in Calgary as the Tamaratt Teaching Professor in Geoscience. My responsibilities include teaching geology courses, doing geoscience education research and faculty professional development.

One piece of my research focuses on conceptual development through embodied experiences - especially how experiences get translated through the use of metaphors, and how some metaphors can actually hinder the learning process. I utilize qualitative methodologies in my inquiries, including collecting audio recordings of student conversations and copies of student work. I use different theoretical frameworks (including experientialism, model-based learning, positioning theory) as lenses to discern patterns in the data. Through abductive and inductive reasoning, I develop explanatory models for the data. For instance, data collected during inquiry activities focused on other crustal dynamics demonstrated that the metaphor tectonic "plate" inhibited student conceptual development concerning elastic rebound theory and the nature of crustal deformation. From their descriptions and hand gestures, students understood the crust as separate "plates", brittle in nature (like their dinner plates at home) as opposed to viewing the crust as a large solid, with narrow zones of deformation. This especially interfered with them understanding the build-up and release of elastic energy in an earthquake. They had no experience of elastic behavior with brittle rocks or plates.

Science is replete with metaphors. When we teach, as experts, we are (mostly) aware of the limitations of these metaphors. Students, who are novices, use their everyday experiences by default. These "common" understandings are usually inconsistent with scientific knowledge and can actually work against students developing coherent understandings.

I find qualitative research to be my preferred mode of inquiry for a number of reasons. First, its methodology – going to the field (a classroom, say), collecting data (signs) of phenomena, discerning patterns in the data, developing explanatory models – is very much like the methodology invoked in geology, itself. So, I feel quite at home with it. Second, investigations into conceptual development in the geosciences is relatively new compared to the other science disciplines. Much exploration still needs to be done, which means asking questions like, "what is happening, here?" This is very much suited to qualitative methodologies. And third, though it is usually difficult to generalize results of qualitative inquiries to the population at large (due to typically small sample sizes), it is still a powerful way to understand the individual, social and contingent nature of learning.