I joined NAGT as a graduate student almost 20 years ago. At the time, how the organization was structured never entered my thoughts. However, now having served in the presidential line, on committees as both member and chair, and as editor of the Journal of Geoscience Education, I know that organizational activities don't happen automatically. A functioning not-for-profit professional association relies on its members and a strong organizational structure that supports members, values their contributions, and provides pathways to leadership. Knowing more about the structure can help everyone contribute to and benefit from NAGT. 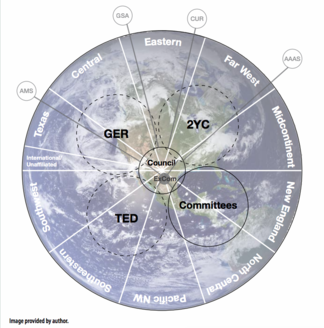 Provenance: Anne Egger, Central Washington University
Reuse: This item is offered under a Creative Commons Attribution-NonCommercial-ShareAlike license http://creativecommons.org/licenses/by-nc-sa/3.0/ You may reuse this item for non-commercial purposes as long as you provide attribution and offer any derivative works under a similar license.

The large circle with the globe represents the membership of NAGT. The white lines divide the globe into sections: most NAGT members are also members of regional sections based on their location—there are no extra fees for being part of a section. The smaller circles with dashed lines are the interest-based divisions—the Geoscience Education Research Division, Two-Year College Division, and Teacher Education Division—which members can choose to join for an additional fee. Sections and divisions both elect their leadership and can organize meetings, sponsor workshops or sessions, produce a newsletter, give awards, etc.

NAGT also has committees that do an enormous amount of work for the national organization: award committees, professional development and website committees, advocacy and diversity committees, and others. These all draw from the membership— members can volunteer to serve on committees or be nominated by other members. Some members of committees are determined ex officio and others are appointed, usually by the Executive Committee.

To facilitate collaboration, NAGT appoints liaisons to associations like the Geological Society of America, the Council on Undergraduate Research, and several other external groups.

At the center of the globe are the NAGT Council and the Executive Committee (ExCom). The leadership of each section and division and liaisons make up the NAGT Council, which provides (1) a forum for sections and divisions to learn from and work with each other and (2) a means for the interests and concerns of the membership to reach the Executive Committee. The Council serves in an advisory role to the ExCom and is not a voting body within NAGT.

Provenance: Emanuel Linton, Carleton College
Reuse: This item is offered under a Creative Commons Attribution-NonCommercial-ShareAlike license http://creativecommons.org/licenses/by-nc-sa/3.0/ You may reuse this item for non-commercial purposes as long as you provide attribution and offer any derivative works under a similar license.

The Executive Committee is the leadership of the national organization. It consists of officers elected by the membership (councilors-at-large, vice presidents, and a secretary/treasurer) and three that are appointed (the executive director and the editors of the society's journals). Members of the ExCom serve as liaisons to the divisions and sections, and often serve on committees as ex officio members. The executive director and the whole society are supported by the often behind-the-scenes work of the Executive Office.

Though it might seem complex, this structure allows NAGT to support a diverse, inclusive, and thriving community of educators and education researchers. There are many avenues for members to get involved in leadership roles and to bring their questions, concerns, and interests to the national leadership. You can read about all of the ways to get involved on the NAGT website.