Go With the Flow: Teaching about the Viscosity of Lava

CHRISTOPHER ROEMMELE (CRoemmele@wcupa.edu) is an assistant professor in the Department of Earth and Space Sciences at West Chester University, West Chester, PA.

The viscosity of lava is an important control on the explosiveness of a volcanic eruption. Using a series of three short demonstrations, students can compare and contrast this characteristic of felsic and mafic magma / lava and get a better understanding of viscosity and how it impacts eruptions and volcano type.

Students in an introductory geology class may associate volcanoes with violent eruptions that wreak havoc upon their surroundings. That may be true for some volcanoes, as tephra and gas are sent thousands of feet into the atmosphere or spread laterally across the surface. But there are many volcanoes on our planet that do not erupt violently and do not pose the same risk to the land and living things in their vicinities.

To combat the misconception that all volcanoes erupt with extreme fury, my class starts with a discussion of molten rock (magma and lava). We contrast two magma / lava compositions (felsic and mafic) in terms of multiple factors, such as mineral and silica content (felsic has a higher silica percentage), color (lighter versus darker), density, and temperature (certain minerals with a lot of silica crystalize at lower temperature so the crystal structure is more complex and extensive). I then perform the following demonstrations to emphasize how important the presence of silica is in a magma, how silica affects the thickness of the different compositions of magmas and lavas, and how silica content helps determine the nature of volcanic eruptions. 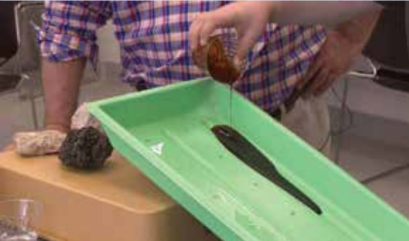 ×
Students observe the viscosities of water and molasses. (Photo by the author)
I use a small plastic stream table positioned at about a 5-degree angle (this could be any tilted flat surface) and have two students pour separate streams of water and molasses down the slope of the table (see above). The class makes observations about consistency and flow of each of the two liquids. I then ask students which of the two was more resistant to flow, and all students note that the molasses was more resistant. It is here that I use the word viscosity to describe the gooeyness or thickness of the molasses compared to the water and note that mafic lava has a lower viscosity than felsic lava, much like the water has a lower viscosity than the molasses. I then ask students what they think creates higher viscosity in felsic lava. Based on our prior class discussions, students note, I hope, that a higher silica percentage is part of the cause. 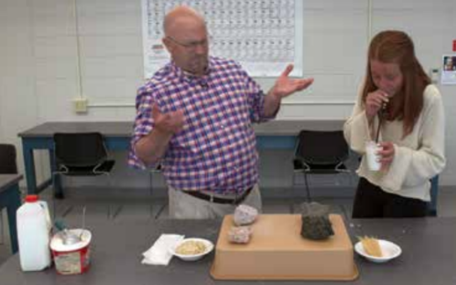 ×
Blowing air into milk and into a milkshake can produce very different outcomes. (Photo by the author)
I bring out a glass of milk and a milkshake (usually made extra thick with double amount of ice cream). A student takes a straw and blows into the glass of milk, and the class sees that bubbles form easily and rapidly and without much fanfare. Blowing through a straw into the milkshake produces quite a different outcome. The same student has to put much more effort — and usually for a longer time — to get the milkshake to react to the input of air. The result is the milkshake bursting suddenly upward and outward, more often than not getting the shake onto the face and torso of the student volunteer and the floor as well. I ask students to consider what causes the differences in the two demonstrations and we discuss that the higher viscosity of the milkshake does not allow the gas to escape easily and the resulting pressure build-up ultimately causes the more violent — albeit fun — outcome. The analogy with molten rock is that higher silica content makes felsic lava more thick (like the milkshake), preventing gas bubbles from escaping with ease, so greater force is able to build in the magma, which leads to a more explosive volcanic eruption. The milk is more comparable to lower viscosity, lower silica mafic lava, where gas can more easily escape, and a less explosive eruption occurs.

I have students conduct a similar exercise to the first demonstration, this time using ketchup and peanut butter (to avoid allergy issues, a thick mixture of flour and water may be substituted for the peanut butter). These two materials have viscosities that are in reality more comparable to mafic lava (ketchup) and felsic lava (peanut butter). Students may pour the materials onto a plastic stream table or even onto the top of a small model volcano (either a small plastic model form or one made of soil and sediment). The ketchup moves slowly but consistently down the sides of the volcano, but the peanut butter doesn't move much at all. I like to leave the demonstration in place all day or for even a week to let students see just how viscous the materials are. As the ketchup flows out farther than the peanut butter from its starting point, this demonstration can help students understand the development of different volcano cone shapes. The less viscous mafic lava (ketchup) forms more gently-sloping shield cones and flood basalts, while the more viscous felsic lava (peanut butter) forms steeper-sided composite cones. For the formation of composite cones, I remind students that we are focused on the liquid and not the solid material (tephra) which is erupted and also forms the structure of composite cones.