FRANK GRANSHAW (fgransha@pdx.edu) is an Adjunct Instructor for Geology and Faculty Fellow at the Institute for Sustainable Solutions at Portland State University, Portland, OR.

I regularly teach a climate science course for non-science majors at Portland State. It is not uncommon, particularly in a year like 2020, for students to ask if we have passed the point of no return in terms of dealing with an increasingly destabilized global climate. Embedded in this are questions of personal agency like "Will anything we do make any difference?" and "What can I do?" So, in addition to teaching science, I am often called upon to help students navigate these uncertain waters.

Related to this I have been part of observer delegations attending two recent United Nations (UN) climate summits (COPs 23 and 24*). As observers we were only spectators to those official negotiations that were open to us. We were, however, free to participate in the full range of civil society events that regularly accompany UN climate summits. These events involve very large and diverse gatherings of researchers, activists, community organizations, nonprofits, government agencies, indigenous groups, labor unions, businesses, and so on from across the planet. They all come to witness and hopefully influence the negotiations. They also come to share issues, efforts, and accomplishments, in order to gather ideas to take back to their own communities and organizations. For geoscientists, there were examples of how Earth science interfaces with the politics, culture, and economics of human survival. There were also many examples of creative and courageous responses to the current climate crisis.

One of the challenges of UN climate events is the sea of acronyms one quickly gets immersed in. UNFCCC is short for United Nations Framework Convention on Climate Change. This is the original climate treaty that went into effect in 1994. COP is short for the Conference of the Parties to the UNFCCC. In other words, a meeting of the nations who have signed the treaty.

There have been many times that I wished I could take students with me to these events or at least bring something of that rich civil society mosaic back to them. In 2019, a group of educators in Portland, Oregon, organized an effort to do just this for local students and the general public.

This effort, the PDX Bridge to COP25, was a series of public gatherings at Oregon Museum of Science and Industry and a nearby liberal arts college, Lewis and Clark College, designed to give local people a chance to become virtual observers to COP25. This included giving them opportunities to talk in real time with official observers at Madrid, Spain (the site of COP25), hear from local activists, policy-makers, and others about how their local efforts are linked to international climate action and to network to build a stronger local climate action community.

Like many pilot projects, the original bridge provided a number of lessons learned, which eventually led to discussion about expanding the PDX bridge, as well as developing a network of local bridges related to the next UN climate summit (COP26). We will be scheduling more gatherings to cover more of the upcoming COP26 conference and engage more local stakeholders in this international event, which is critical in dealing with an increasingly urgent issue involving the entire global community. We are working with communities around the globe to help them develop their own local bridges. The goals of this network are: 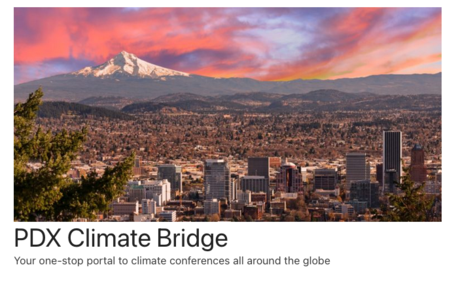 Hide
Figure 1: The logo for the current PDX Climate Bridge site (https://pdxbridgetocop25.net/). This site, which was the gateway for the PDX Virtual Bridge to COP25, is now being modified in preparation for the next UN Climate Summit (COP26)

Provenance: PDX Climate Bridge
Reuse: This item is in the public domain and maybe reused freely without restriction.

The UNFCCC secretariat (the UN agency tasked with supporting the continued negotiation and implementation of the treaty) has for nearly two decades provided extensive online links to major meetings (both recordings and live connections.) These, however, have gone largely unnoticed by both the geoscience education community and the general public. One cause seems to be the technical complexity of much of what was being viewed. Viewing is also a solitary activity that is devoid of the rich human interaction that is so much a part of civil society events. Many of these recordings and live links to summit events were available through the bridge website, but the focus of the bridge was on publicly gathering to communicate with observers at the COP, hear from live panels, and have in-person conversations. In this way—by including the kind of interaction one would find in the on-site meeting space—the bridge could be more engaging.

This past year significantly altered the landscape of international climate action. COP26 was postponed to November 2021, but the UN and a number of national and other international groups organized major online conferences to maintain momentum for increased climate ambition, the latter being UN-speak for nations increasing and following through on their emission reduction and climate adaptation commitments. For developed countries this also means increasing their commitment to assisting developing countries to reduce their emissions and adapt to a changing climate.

One major benefit of this new landscape is that it has driven significant improvement in the technology for virtual meetings and made the practice of video conferencing commonplace. Because of this, events like virtual bridges offer a set of new tools for students to creatively engage in the climate issues they encounter in our courses, giving them insight into how Earth science relates to our public life and providing them with critical opportunities to develop a lasting sense of personal agency.

There are of course challenges that come with this new reality...

First, at present, all our participation in many climate events is, by necessity, online. This means that the majority of what we do is still solitary—individuals behind computer screens. Because of our current public health situation, it is difficult to determine what public gatherings will look like by late 2021. Given that the 2019 pilot bridge was a hybrid event (on-site gatherings that were virtually connected to other gatherings), there is considerable question about what a local bridge to COP26 would look like.

Second, devising programming for a local bridge requires a high degree of coordination with the UNFCCC process. This can be particularly difficult since many UNFCCC meetings and conferences don't have their agenda solidified until a week or two before the event. One solution for the 2019 PDX Bridge was establishing a relationship with national and international groups having observers at COP25. These observers became liaisons talking with attendees at the local bridge gatherings via video conference links, as well as providing programming in the form of online panel discussions and daily reports. The issue of coordinating with the secretariat for COP26 will likely be different, given a year with largely online meetings, a continuing public health crisis, and the need for increased public participation to support increased climate ambition.

Hide
Figure 2 – The logo for the ACE National Planning Framework (https://aceframework.us/). Information about the framework, the discussions leading up to it, and an opportunity to support it by becoming a signatory can be found on this site

Provenance: ACE National Planning Framework
Reuse: This item is in the public domain and maybe reused freely without restriction.

Third, trying to capture the vitally instructive diversity of the civil society realm of a COP is difficult without a local bridge making a concerted effort to reach out to a diversity of local groups and working with these groups to host events particular to their concerns. For instance, the 2019 PDX bridge, being a fledgling effort, had perhaps a dozen local partners from a region potentially having several hundred groups who might directly or indirectly be regarded as climate stakeholders. This not only limited the diversity of voices included in the local bridge, but also significantly limited the number of local events possible during the two weeks of COP25. This is a major issue our local organizing committee will be tackling as we look towards COP26.

Fourth, many observers venture to the COPs in hopes of influencing the negotiation process. Though some observer groups are successful at this through public demonstration, press conferences, or one-on-one conversations with negotiators and UN staff, the option to influence is not readily available to most observers. As the COP organizers embrace additional channels for virtual engagement, this problem becomes more complex. One strategy used in the 2019 PDX Bridge was to involve attendees in a Talanoa dialogue* for generating a local community statement to be sent to UNFCCC staff.

A strength of the civil society events associated with COPs is that they enable communities to learn from each other, particularly in exhibit spaces and the meetings that take place in them. One of the rich possibilities of a bridge network is the ability for local bridges to communicate with one another, extending what happens in the civil society sector of COP26.

Talanoa dialogue is a negotiation strategy designed to help countries implement and enhance their Nationally Declared Commitments to the UNFCCC. Launched at COP23 under the presidency of Fiji, this process has been adapted from a traditional Fijian practice for community governance that involves story-telling that leads to consensus-building and decision making.

The US ACE National Plan Framework

In both the original UNFCCC treaty and the 2015 Paris Climate Agreement, treaty signatories are called upon to establish ACE (Action for Climate Empowerment) national plans. ACE is meant to empower all members of global society to engage in climate action, through education, training, public awareness, public participation, and public access to information on both the national and international level. However, because ACE is an aspirational goal, few of the nearly 200 countries signing the Paris Agreement have created their own national plans, and to date no major emitting country has done so.

In summer of 2020, a diverse group of people from education, nonprofit community groups, governments, tribes, and others from across the United States came together to discuss an ACE national plan for the US. The results of these discussions, the US ACE National Plan Framework, was released as a document in November 2020. In January of 2021
the framework was presented to the Biden administration as a template for an official national plan that would be presented to the international community during COP26 in November 2021.

As geoscientists and citizens, it is readily apparent to us that we are in one of those unique times in human history that is fraught with urgency, seemingly insurmountable difficulty, and numerous opportunities to set a fundamentally new course going forward. As geoscience educators we have the responsibility to provide our students with tools to navigate the uncertain waters ahead. Linking our students and the communities we live in with the critical work being done on the international level is an important avenue for fulfilling that responsibility. Here are some suggestions for ways to get involved...

Comment? Start the discussion about Engaging the Geoscience Community in International Climate Action