Geoscience Education Advocacy 101: An NAGT Primer on Action Outside of the Classroom

CATHERINE A. RIIHIMAKI (car3@princeton.edu) is the Associate Director of the Science Education Council on Science and Technology at Princeton University, Princeton, NJ, and MIKE PHILLIPS (mike_phillips@ivcc.edu) is a Professor of Geology at Illinois Valley Community College, Oglesby, IL. 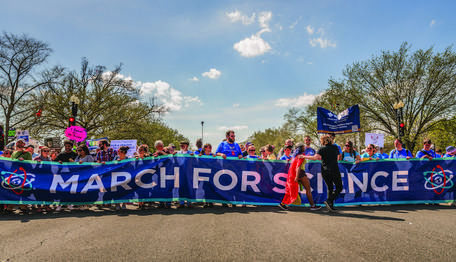 Provenance: Geoff Livingston
Reuse: This item is offered under a Creative Commons Attribution-NonCommercial-ShareAlike license http://creativecommons.org/licenses/by-nc-sa/3.0/ You may reuse this item for non-commercial purposes as long as you provide attribution and offer any derivative works under a similar license.

In 2009, Congress had a moment in which they tried to address climate change through establishing a cap-and-trade market for carbon. Having just moved to New Jersey a few months earlier, I knew little about my Congressman, Republican Leonard Lance, except that I hoped that he would vote in favor of the Waxman-Markey bill. I typed a letter filled with details of my professional opinions as a geoscientist and mailed it to his office. I then watched as he joined seven other Republicans and most Democrats in narrowly passing the bill in the House. Unfortunately, it went no further.

Elected officials from local to national levels respond to their constituents' opinions for a variety of reasons. As part of a democratic political system, they may feel an ethical obligation to reflect the majority opinions in their districts. They may believe that the best policies are ones that have the most enthusiastic support. Perhaps most basically, they may believe that the best path to reelection is to listen to voters. Groups like the Tea Party and Indivisible have encouraged their members to build political power through directly pressuring their elected officials.

Elected officials may also recognize that their constituents have more expertise than they do on certain issues. As a geoscience educator, you can provide information on a wide variety of topics including natural and human-induced hazards, natural resources, learning standards, and resources for education. You can use your experience as an educator to translate technical information into plain language, discuss the implications of various scenarios, anticipate the questions that are likely to arise as policies are developed, and create a "big picture" view based on the available body of knowledge and delve into subtleties of different actions. If your advice proves particularly useful, you can develop an advisory relationship and establish a foundation for future interaction with your representatives on an even wider range of topics.

Although political systems differ geographically, you are almost certainly represented by a variety of elected officials. Like any other constituent, you can contact your representatives through a variety of means, including phone, email, and in-person. In general, the more personal and effortful an action is, the more effective it will be. NAGT has resources to help you become an impactful advocate.

NAGT's mission is to support a diverse, inclusive, and thriving community of educators and education researchers to improve teaching and learning about Earth. This is broken down into four goals:

Advocacy is an important part of this mission and addressing these goals. After all, improving teaching and learning about Earth requires efforts not just at the level of the classroom but also at larger scales where decisions about learning standards and objectives, curricular materials, and resource allocations are made. Moreover, elected officials also need to recognize the societal relevance and cultural significance of the geosciences.

Other geoscience professional societies, such as the Geological Society of America, the American Geosciences Institute, and the American Geophysical Union, also support advocacy efforts.

Within NAGT, the Advocacy Committee leads advocacy efforts in association with the Executive Committee. The Advocacy Committee works to maximize the impact of NAGT's work on behalf of its members and all geoscience educators. This is done in part by supporting initiatives by local, state, national, and international entities, including professional organizations, non-profits, and government institutions, that reflect the NAGT mission. We provide the first draft of NAGT letters of support for initiatives (e.g., legislation, public comments, non-profit programs). We also provide initial responses to advocacy requests from other organizations and from NAGT Sections and Divisions, including making recommendations for when NAGT should co-sign other groups' letters and statements.

We also provide resources to enable members' own advocacy. Most significantly, the Advocacy Committee recommends the development of position statements or white papers, either as stand-alone NAGT documents or co-authored documents with partner organizations. We also recommend endorsements of statements authored wholly by other organizations. The NAGT position statements can be excerpted or sent in their entirety to your elected representatives. They can also be used as the basis for letters to the editor and other outreach efforts.

NAGT currently has four position statements, addressing Teaching Evolution, Climate Change, High School Earth Science Instruction, and The Importance of Dual Credit and Concurrent Enrollment to the Geosciences (co-written with the National Earth Science Teachers Association). The Advocacy Committee is assessing each for revision over the next year, both to update the content to match current science and education frameworks and to put them into a uniform format that is user-friendly for our members and for policy-makers. Each statement includes a detailed description of the issue and recommendations for actions that various stakeholders can take. The following are examples from each statement:

Teaching Evolution: "NAGT...maintains that the scientific theory of evolution should be taught to students of all grade levels as a unifying concept without distraction of non-scientific or anti-scientific influence."

Climate Change: "NAGT strongly supports and will work to promote education in the science of climate change, the causes and effects of current global warming, and the immediate need for policies and actions that reduce the emission of greenhouse gases."

The Importance of Dual Credit and Concurrent Enrollment to the Geosciences: "NESTA and NAGT encourage...Secondary Faculty and Administration [to identify] local post-secondary institutions with Earth & Space Science Departments. Approach them about the possibility of a dual credit or concurrent enrollment collaborations which will have the potential to increase their enrollment, provide visibility for their department, and increase the number of students who may choose to major in the Earth & Space Sciences."

Advocacy can feel awkward to scientists who have been trained to attempt to be as objective in their science as possible. We appropriately worry about allowing personal philosophies, preferences, and beliefs to cloud our aspirations for objectivity in our research, teaching, and mentorship. However, reasonable arguments can be made that it is our ethical responsibility to share our knowledge and understanding with policy-makers. Climate scientist James Hansen speaks eloquently in a TED talk about his journey from working on foundational calculations of climate change to being arrested at the White House for advocating for government actions to mitigate climate change. While being arrested is not a requirement for effective advocacy, his story emphasizes that scientists and educators should speak out when they see opportunities for society to improve.

One of the lessons I have learned over the past four years is that our elected officials are simply people, perhaps with more resources and a better resume for public life, but people nonetheless. The most effective advocacy is personal, heartfelt, and sustained. NAGT helps to enable member advocacy through making position statements available, which can then be customized for your own experiences and interests. You can also help advance NAGT's advocacy resources by joining the Advocacy Committee. Nominations (including self-nominations) can be made through the website nomination system.

My own advocacy became much more focused and intense in 2017, when I helped to form a local Indivisible group with a few other scientists and educators in my neighborhood in New Jersey. We researched Congressman Lance's record on the environment since he voted for the carbon cap-and-trade bill in 2009. What we learned was distressing: his League of Conservation Voters scorecard peaked at 71% in 2009 but steadily declined to 6% in 2014. When we and other groups in our district began fiercely advocating for policies that included pro-environment bills, his rating rose to 34% in 2017 and 60% in 2018. We accomplished this through attending his town halls and asking questions about his environment positions, writing letters to the editors of local papers, talking to him at his in-district offices, and calling his office weekly.

The change in his voting pattern was not enough to get him reelected in 2018. Early on, I was able to meet with all of the Democratic candidates running in the 2018 primary, including helping Tom Malinowski strategize how to approach earning the endorsement of the Hunterdon County Democratic Party. He succeeded in winning the primary in part because the other counties in our district followed our lead of endorsing Malinowski.

During that time, I also became passionate about local politics, realizing that there were opportunities to impact education by running for my local Board of Education. We had many areas that needed help, including improving relations between our teachers and the board, and stabilizing the district's administrative leadership. On Election night in November 2018, I celebrated my victory with the newly elected Congressman Malinowski. I've helped to settle a contentious contract with our teachers' union and hire an exceptional superintendent and business administrator, while also serving as chair of our Curriculum Committee. Congressman Malinowski just became the first Democrat in decades to be reelected to represent New Jersey Congressional District 7. His League of Conservation Voters scorecard was 97% in 2019 and 100% in 2020.

Geoscience Education Advocacy 101: An NAGT Primer on Action Outside of the Classroom -- Discussion