Marcia Bjornerudhas been awarded the 2019 James Shea Award by the National Association of Geoscience Teachers. 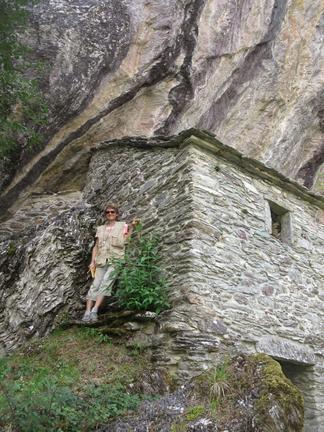 Marcia Bjornerud is a professor of geology at Lawrence University in Appleton, Wisconsin. I am pleased to see her recognized as the 2019 recipient of NAGT's James Shea Award, which celebrates exceptional contributions to public understanding through writing about geoscience. Marcia has published two superb books about geology: 2005's Reading the Rocks, and 2018's Timefulness.

Both books are grounded in the serenity of contemplating data through the lens of Deep Time. Whereas "Reading the Rocks" was about the awesome insights of Earth science, "Timefulness" is about the relevant insights of Earth science to society. If we don't know our deep history, Bjornerud argues, we live only in the present, divorced simultaneously from our rich natural heritage and devoid of responsibility for the as-yet-unmanifested future results of our actions. By anchoring our human perspective to the broad sweep of cosmogenic evolution and terrestrial changes, we gain the proper 'sense of where we are,' unblinkered by short-term delusion or greed.

Marcia's books are lyrically written, with an ear for a good turn of phrase, evocative analogies, and clever wordplay. The books are rich in detail, though broad enough in scope that they will satisfy every NAGT member, as well as your average run-of-the-mill nature lover. She has a perfectly honed sense of the proper proportion of enthusiasm, the right balance of quantitative measurement and mind-blowing elucidation, expressed in terms that make me swoon. Everything she writes about is big and real and essential. An example: "Over more than 4 billion years, in beach sand, volcanic glass, granites, and garnet schists, the planet has unintentionally kept a rich and idiosyncratic journal of its past.... The genre varies from breathless thriller to quotidian diary; the action ranges from microbial metabolisms to mountain building." (Reading the Rocks, p. 5) Under a section subtitled "Grammar and Syntax of the Three Rock Languages," Bjornerud says, "Just as you wouldn't look to a cookbook for information on military history, you wouldn't expect a sandstone to tell you much about the Earth's interior. Sedimentary rocks are the best reference works to consult if you are interested in past conditions at the surface of the Earth - for example, ancient climates, biological activity, or the distribution of water bodies. Igneous rocks chronicle the long-term chemical evolution of the Earth and provide glimpses into processes that occur at inaccessible depths. Metamorphic rocks, born in one setting (sedimentary or igneous) and transformed as they encounter new environments, are the travel writers of the rock world, chronicling their astounding journeys through the crust." (RtR, p. 33)

This is so refreshingly vital! It makes me wish I had her as my own professor. Like me, Marcia uses geological insight as a gateway to philosophical perspective. For instance, in Reading the Rocks, she says, "Human consciousness is arguably the first truly novel innovation to arise since Cambrian time, in the sense that the technologies our consciousness has spawned have freed us from the limits of our own body architecture."

More to the point, in terms of geology's relationship to human society, Marcia sees our science's insights as a guide to political action. "Perhaps the greatest challenge we face in attempting to fathom the Earth is to gain a proper sense of our own size as a human species," she writes. "Like spoiled children, we routinely overestimate our importance on the planet but underestimate the destructiveness of our self-absorption." (RtR, p.98)

Thus, in Timefulness, she asserts that our species is both "intemperate and intemporate." She makes the case that geological thinking is the perspective that can save our species, and the biosphere, if not "the world." Our species is clever and powerful, and we have altered the natural cycling of matter and energy in many aspects of the planetary system that supports our existence. Some of these alterations are apparently minor and others are so starkly aberrant that they are difficult to comprehend. At the forefront of Bjornerud's mind is of course the human-induced relocation of carbon atoms from their sedate position in the sedimentary rocks of Earth's crust into a new venue: bonded with oxygen, aloft in the troposphere. There, some of them block spacebound emissions of infrared radiation (warming the planet's surface) and others dissolve in the oceans (lowering its pH). This does not bode well, and the rate of the carbon flux is increasing even as scientists warn against its unintended effects. Bjornerud empowers us to "repeal the Anthropocene" by first coming to terms with the physical reality geoscientists have revealed.

Marcia's writing is vibrant and vital, and helps to connect the insights of our discipline with both our own personal sense of selfhood, and the fate of all life on Earth. It is of critical value, and everyone who reads her work comes away enriched and inspired.

THANK YOU. I'm deeply honored and humbled to receive this recognition. Thank you to NAGT and the Shea Award Committee. And I'm especially grateful to Callan Bentley for nominating me. Although I only just met him in person at this meeting, I have long admired his insightful -- and indefatigable -- blog-posting, and his advocacy for innovative teaching technologies.

In addition to both being structural geologists, he and I seem to share an almost evangelical urge to share geology with other Earthlings.

In my case, this may be because I had a conversion experience. Like many of you, perhaps, I stumbled into geology more or less by accident.

I do recall as a 1st grader being fascinated by Surtsey – a new volcanic island formed off the coast of Iceland in the 1960s.

In school we watched a black and white film showing the spires of steam and hot ash shooting out of the cold north Atlantic.

It suggested a secret life force inside the stony-faced Earth that terrified and thrilled me.

But no one said: People called geologists study such things. And in my middle and high school, like most in this country, geology was entirely absent from the science curriculum.

Moreover, the fact that every science teacher in our school was male drummed out of me any nascent thought that I might become a scientist.

As a freshman in college – by then intending to major in languages or linguistics, with some ill-formed and naïve idea of becoming a translator -- I signed up for Geology almost on a whim. I didn't have a car, and the field trips sounded like a nice chance to get out of town.

My expectations were low; of course everybody called it Rocks for Jocks.

But I found that it was a different kind science than I had been exposed to in school. It required kind of whole brain thinking I hadn't encountered before:

It demanded a humanities-like close reading of the texts of the natural world;

It involved the rigorous application of physics and chemistry to wild and unruly things like volcanoes and oceans;

Above all, it required a vivid but disciplined imagination – the capacity for visualization across great expanses of time and space.

And I saw its vast explanatory power. I had always been fascinated with word origins – windows into past ways of seeing the world. But geology provided something even grander – it was nothing less than the etymology of the world itself!

More than 30 years later I thank my lucky stars that I accidentally found my way into this field but am frustrated that it is still largely invisible to the public.

Geology is a strange hybrid of the pragmatic and philosophical. It's about where to find oil and groundwater, how to protect people from natural hazards – but also about deep existential matters:

Where do we come from? Why is the Earth the way it is? What factors favor stable, resilient ecosystems and societies?

And contrary to public perceptions, it's as much about the future as the past.

I write for popular audiences in the belief that if more people understood our shared history and destiny as Earth-dwellers, we might treat each other, and the planet, better.

At a time when the world is more deeply divided than ever by religious dogmas and political animosities, there would seem to be little hope of finding a common philosophy or list of principles that might bring all factions to the table for honest discourse about increasingly intractable environmental, social and economic problems.

I choose to believe that the communal heritage of geology may yet allow us to reframe our thinking about these issues in a fresh new way.

In fact, we geologists (and other natural scientists) already serve as a kind of unofficial international diplomatic corps who demonstrate that it is possible for people from developed and developing countries, socialist and capitalist regimes, theocracies and democracies to cooperate, debate, disagree and move toward consensus, unified by the fact that we are all citizens of a planet whose tectonic, hydrologic and atmospheric habits ignore national boundaries.

Rocks are a universal language. Although geology drew me away from studying languages, I guess I did end up becoming a translator, transcribing Earth texts into narratives readable by average Earth dwellers - and emphasizing that rocks are not nouns, but verbs.

But the Earth manuscript it so long and complex and nuanced, all of us in the geosciences need to contribute to this monumental translation project and make Earth's story as widely accessible as possible. THANK YOU