Callan Bentley has been awarded the 2018 James Shea Award by the National Association of Geoscience Teachers. 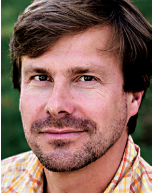 Callan Bentley, an assistant professor of geology at Northern Virginia Community College's Annandale campus, is a contributing editor for EARTH magazine, has served as a newsletter editor for the two-year-college division of NAGT, of which he is president, and for the eastern section of NAGT. He also maintains a popular geology blog, Mountain Beltway and has contributed to five geology and Earth Science textbooks published by Pearson.