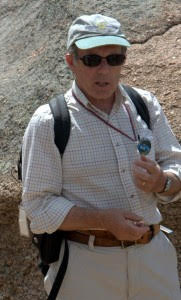 Provenance: Claire Branigin, Carleton College
Reuse: This item is offered under a Creative Commons Attribution-NonCommercial-ShareAlike license http://creativecommons.org/licenses/by-nc-sa/3.0/ You may reuse this item for non-commercial purposes as long as you provide attribution and offer any derivative works under a similar license.

Dr. Reinhard (Bud) Wobus has been awarded the 2016 Neil Miner Award by the National Association of Geoscience Teachers.

From his home in the Geoscience Department at Williams College for the last 50 years, Professor Reinhard (Bud) Wobus has reached far and wide to spread his enthusiasm for geology. An outstanding teacher, mentor, and research supervisor, Bud has helped hundreds of Williams students explore geology in innovative introductory courses and through the geology major. He has introduced countless others to geology through 35 years of work with the Colorado Outdoor Science Center, though numerous field excursions for Williams alumni, and as a field trip leader for local groups in the Berkshires. As a long-time proponent of the value of undergraduate research, Bud obtained funding for a multi-institutional geology research collaborative in 1969. Building on its success, he was instrumental in the establishment in 1986 of the Keck Geology Consortium (now 18 colleges coast-to-coast) which has supported undergraduate geoscience research for nearly three decades. He was a founding member of the Geology Division of the Council on Undergraduate Research in 1988. By creating enduring structures like the Keck Consortium and through his direct work with students, alumni and citizens, Bud has 'stimulated interest in Geology' and increased the capacity of others to do the same.