VEPP: Will it Erupt? - Predicting Volcanic Events at Kilauea - Preparing the next generation of DISASTRONAUTs

This is an exercise that is in development and will not be fully tested in the classroom until Spring 2011. Please check back regularly for updates and changes.

Using data available from the VEPP website, students will examine time-series geophysical data (seismicity, tilt, GPS) to evaluate Kilauea during June, July and August of 2007. Based on plots of the geophysical data, students will develop hypotheses about geologic events that occurred during the time period indicated. Students will test their hypotheses by using online and library resources to find relevant geologic data. Student products include graphs, data descriptions, correlations of geophysical data sets and a final written or oral report.

Students will be able to:

Students will develop/enhance skills in:

This activity is a project that can be executed in lecture or laboratory setting and is intended for use with geoscience majors.The entire activity (including Parts 1 and 2) is likely to take at least two lab periods. Much of it (exploration of the web resources) can be assigned as homework. It can also be adapted to fit into a shorter time period.

Intended for a combination of student levels: Sophomore and above.

Originally designed for use in the following courses:
This activity can be adapted to a variety of courses with large variations in experience.

Briefly describe or list the skills and concepts that students must have mastered before beginning the activity:


This is a stand-alone exercise that can come at any time during a course.

We have designed this exercise in two parts: The first is the major component dealing with June-August 2007 events at Pu'u O'o and the summit, the second deals with more minor events in 2010 and is optional for upper level and field courses.

Students will examine and plot geophysical (VEPP) data from June-August 2007 in order to construct a hypothesis about events during the time period indicated. These activities will be followed by on line (and library) research to test and refine hypotheses. The culminating experience will be communication (either written or oral) of findings by students.

This is under construction in a word file for download 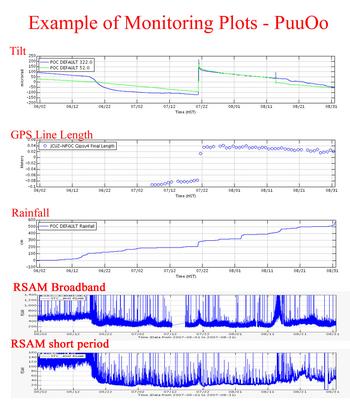 Plot the data using time on the x-axis and the measure of deformation on the y-axis. (Vector plotting will be done on VEPP or maps will be given to students). If plotting in excel, please make sure your x-axis is the same size to facilitate data comparison.

Describe patterns in each of the time-series data sets. Take particular note of major changes in deformation parameters.

What correlations are present in the three different datasets?

Using the geophysical data provided, in a paragraph summarize one (or more) hypotheses about the variety of geologic events that may have occurred during this time period.

Hand in all the material above for grading.

From your instructor, obtain plots of geophysical data (GPS) from the summit of Kilauea (Halemau'mau) to be used to extend your hypothesis. You should be thinking about how the summit patterns relate to Pu'u 'O'o in order to understand the magmatic system at Kilauea.

The following activities should be developed into a written (or oral) report that uses appropriate style and grammar.

Based on your research, revise your hypothesis about the links among geophysical patterns and geologic events. Make sure you make connections between the summit and Pu'u O'o data. Explain how your hypothesis changed (or didn't); cite data examples to support your final hypothesis.

Synthesize all of your information into a reasonable chronology of geologic and geophysical events in the Kilauea magmatic system during June-August 2007.

Your written report should include the following:

Students will examine geophysical (VEPP) data from May-July 2010 in order to compare events that occurred in 2007 and 2010. These activities will be followed by on line research to develop a chronology for the smaller scale events documented during 2010. The final product will be several paragraphs contrasting deformation, eruptions and hazards during the summers of 2007 and 2010.

This is under construction in a word file for download

You will receive tilt, GPS, and seismic data for May through July 2010 for Pu'u 'O'o and the summit.

Describe patterns in each of the time-series data sets. Take particular note of major changes in deformation parameters.

What correlations are present in the three different datasets? What is the temporal relationship between the summit and Pu'u 'O'o geophysical data? Are the scales of deformation similar or different?

Mine the web for geologic information about what was going on during May-July 2010 on the flanks of Kilauea. Here are some helpful links:

Using the geologic/flow maps, summarize the interpretive chronology of geophysical and geological events on the flanks of Kilauea during summer 2010.

Contrast the scale of deformation and extent of eruptions during June-August 2007 and May-July 2010.

Contrast the effects (e.g., damage and destruction of property) on the residents of the affected regions.

Is there a correlation between the erupted volume and the hazards for inhabitants of this region? Explain your answer. Is it what you expected? Why or why not?

The following information will be available for instructors:

Accessing the VEPP Web site (https://vepp.wr.usgs.gov) requires a password, which can be obtained by sending an email with your name, affiliation, and intended use of the site to mpoland "at" usgs.gov

Please describe any helpful examples of this activity, as well as any potential variations on this theme:

Also in development is a Part 3 that uses real-time data as an exercise for a field trip.

The authors envision this exercise as one that could be used as an individual or small group exercise.

What tips might you offer to other educators planning to use this activity?

This is a project under development and has not been tested in the classroom. By the end of Spring 2011, the three authors will have implemented this in their classes - please check back in Summer 2011 for more information and tips about what worked and didn't.

Describe briefly how you determine whether students have met the goals of this assignment or activity.

Goals 1-4 will be assessed when students hand in their hypotheses/lab sheets. These activities will be graded on completeness, accuracy of plotting/description and appropriate supporting evidence for the hypothesis.

Goals 5-6 will be assessed in the culminating communication of the results of students' research. A rubric is provided for the grading of the assignment.

Please list any supporting references or URLs for this activity:

This post was edited by Rachel Teasdale on Oct, 2010