Using the United Nations to Teach Systems Science and the Anthropocene

REBECCA OWENS (rowe@tjc.edu) is a professor of geology in the Engineering and Physical Sciences Department at Tyler Junior College in Tyler, Texas.

On May 6, 2019, the United Nations released a report detailing the impact of humans on the planet. The report garnered much attention in media outlets and on social media because of its dire evaluation of human impact on ecosystems and the repercussions on humans. Since students learn more readily when they perceive the subject matter to be relevant to their own lives, the public attention provides an opportunity for geoscience educators to create a more scientifically literate and ecologically conscious population by discussing systems science and the Anthropocene (proposed and increasingly accepted as the epoch in which humans are a dominant force on Earth) while exemplifying the relevancy of Earth systems science to potential geoscience recruits.

In a 2016 paper, Kathleen Sherman-Morris and Karen McNeal interviewed 645 college science majors regarding their perception of various sciences. Except for meteorology, every geoscience subfield (geology, geography, physics) was perceived to benefit society less than life sciences (biology, chemistry) or engineering. All geosciences were perceived to help the environment less than life sciences or engineering.

These perceptions matter, for helping society and helping the environment were ranked by those surveyed as the most important attributes for them of a future career (Sherman-Morris and McNeal, 2016). While geoscientists and geoscience educators are aware of these sciences' applications to addressing climate change, natural hazards, energy demands, and natural resource management and distribution, this knowledge clearly is not getting through to students. Educators should make the correction of this misperception a priority. Recruiting new geoscientists who heavily prioritize society and the environment will benefit both the profession and humanity. 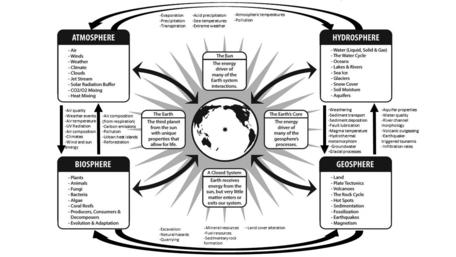 Provenance: Hannah Eglinton, Carleton College
Reuse: This item is offered under a Creative Commons Attribution-NonCommercial-ShareAlike license http://creativecommons.org/licenses/by-nc-sa/3.0/ You may reuse this item for non-commercial purposes as long as you provide attribution and offer any derivative works under a similar license.

The report by the Intergovernmental Science- Policy Platform on Biodiversity and Ecosystem Services (IPBES) offers an excellent opportunity to demonstrate the importance of geosciences in the environment and thus to society:

- Introduction of the Anthropocene as a new proposed epoch connects historical geology to modern environmental concerns and demonstrates geologists' recognition of the unique role humans occupy on Earth.

- Increased natural hazards resulting from climate change will be assessed and mitigated by geomorphologists and geographers studying the evolution of landscapes.

- U.N. expert Philip Alston predicts a future "climate apartheid" in which the wealthy pay to escape from hunger and natural disasters while the poor suffer (Alston, 2019). Knowledge of Earth processes by legal and social activists will help address such environmental justice concerns.

The U.N. report was compiled by 145 expert authors from 50 countries over three years. It lists five major drivers of ecosystem change, in descending order of impact: (1) changes in land and sea use; (2) direct exploitation of organisms; (3) climate change; (4) pollution; and (5) invasive alien species. The result of these factors according to IPBES Chair Sir Robert Watson (IPBES, 2019) is that "The health of ecosystems on which we and all other species depend is deteriorating more rapidly than ever. We are eroding the very foundations of our economies, liveli- hoods, food security, health and quality of life worldwide."

The IPBES report is not surprising to Quaternary geoscientists, who study the current and most recent of the three periods of the Cenozoic Era in the geologic time scale of the International Commission on Stratigraphy. Much has been published about the proposed new epoch (Certini et al., 2011; Lewis, 2015; Waters et al., 2016; Brown et al., 2017), though the starting point of the Anthropocene is still debated. Human effects on ecology (Braje and Erlandson, 2013; Wohl, 2013; Corlett, 2015), geomorphology (Goudie and Viles, 2016; Dixon et al., 2018), climatology (Dalby, 2014; Ribot, 2014), hydrology (Wagener et al., 2010), and seismology (Ellsworth, 2013; van der Baan and Calixto, 2017; Foulger et al., 2018) have been well-documented for years. Roughly 1 million animal and plant species are in danger of extinction within decades. Some 75 percent of the land environment and 66 percent of the marine environment have been significantly altered by human actions. Land degradation has reduced productivity of 23 percent of the global land surface, and coastal land degradation has put 100-300 million people at high risk of floods and hurricanes. Fertilizers and industrial pollution have created over 400 ocean "dead zones," with a combined area of over 245,000 km2. These negative trends and others are expected to continue to 2050 and beyond in all scenarios except where transformative change is enacted.

"Through 'transformative change,' nature can still be conserved, restored and used sustainably" (IPBES, 2019). Classrooms focused on a systems approach to science, with emphasis on the human role in these systems, elicit change by demonstrating the interconnectedness of scientific processes, which are too often taught as isolated systems. Students will understand that altering one component of a system produces a cascading effect that impacts many others, a phenomenon which can be directly related to all aspects of geoscience.

While numerous news reports over the years have highlighted one aspect of human impact on earth processes, the IPBES report relates human activity to many natural processes, then connects the effects of resultant ecosystem degradation to human survival. Though there is a tendency to portray ecosystem care as an altruistic concern for the natural environment, seemingly separate from the human environment, this report rejects that approach altogether, highlighting the connectedness of all systems.

A system is a group of interdependent materials that interact to form a whole. All systems have boundaries and may be open, closed, or isolated. Most geologic systems are open, meaning that they can exchange matter and energy across their boundaries (Christiansen and Hamblin, 2014).

Introducing the concept of systems to students for the first time is easily achieved with the example of a car, a computer, or a human body. For the whole entity to function properly, all its internal components must be working properly. In introductory geoscience classes, it is often convenient to treat each part of the Earth system (such as the geosphere, cryosphere, biosphere, atmosphere) as though isolated. However, for students to become truly scientifically literate citizens, they must understand connectedness: that every system, or "sphere" of Earth, interacts with the others in a collection of subsystems (see figure).

Many concerns raised by the 2019 IPBES report can be remedied with simple changes, but only if a great proportion of people choose to make them. This will only occur if people know of the importance and impact of those changes. Producing a scientifically literate populace is perhaps the most important role of science educators. Understanding the planet and its processes influences our students' decisions in lifestyle and in politics, both of which are necessary to sustain healthy ecosystems. It is through policy changes and individual actions, after all, that transformative change will ultimately restore ecosystems (IPBES, 2019). But emphasis on Earth systems and the human role in them may have a secondary benefit in the recruitment of new geoscientists.

If transformative change is to occur to reverse the environmental degradation described by IPBES, an understanding of Earth processes and their interconnectivity must be held by the general populace and not solely by trained geoscientists. We have a heavy responsibility, then, to ensure that our students, at whatever academic level they may be, are impressed with the weight of humans' effect on the planet and the urgency of needed change.

Goudie, A. and Viles, H., 2016, Geomorphology in the Anthropocene. Cambridge University Press, 380 p.