Teaching about Mineral Consumption and the Environmental Considerations that Accompany It 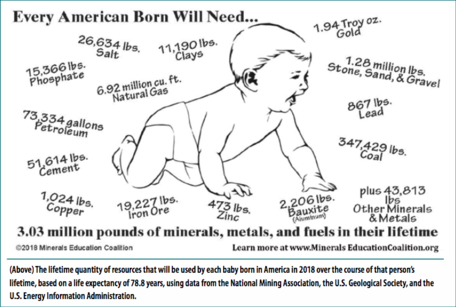 Provenance: Alexis Walters, Carleton College
Reuse: This item is offered under a Creative Commons Attribution-NonCommercial-ShareAlike license http://creativecommons.org/licenses/by-nc-sa/3.0/ You may reuse this item for non-commercial purposes as long as you provide attribution and offer any derivative works under a similar license.
ADAM C. SIMON (simonac@umich.edu) is a professor and STEPHEN E. KESLER (skesler@umch.edu) is an emeritus professor in the Department of Earth and Environmental Sciences at the University of Michigan, Ann Arbor, MI.

We scaffold a framework for discussion by allowing students to mine data for their own consumption of a small number of resources. The exercise can easily be adapted for any resource. We focus on five resources: 1) iron ore, used to produce steel that is the backbone of our built environment; 2) salt, used for agriculture and food preservation as well as deicing roads to make travel safer; 3) phosphate, used for agriculture; 4) aluminum, which because of its strength and resistance to corrosion, is used to build airplanes and in construction of buildings and for long-distance electric power lines; and 5) copper, used to push the charge of electrons into everything we plug in and operate by battery.

In this exercise, students extract data about resource production and consumption and use those data to evaluate just how much each person depends on mineral raw materials and therefore how much we, as individuals, contribute to environmental problems related to mineral production. The United States Geological Survey (USGS) tracks the production and consumption of all mineral resources and compiles these data in annual summaries available for free from their Mineral Information home page at: http://minerals.usgs.gov/minerals/pubs/commodity/ Students go to the USGS webpage for the appropriate commodity from Table 1. After opening the Mineral Commodity Summary for that specific commodity, students open the most recent year available. The file will open as a PDF. 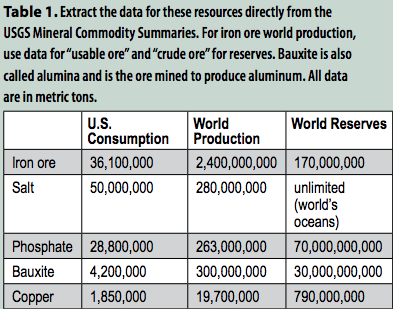 Students are told the term "consumption" is defined as the quantity of a resource used by society in one year. The term "production" is the quantity extracted in one year by mining companies from mineral deposits. The term "world reserves" is the quantity of a resource that geologists have verified is available for future extraction. Students should be told that in some cases, the consumption data will be for "apparent consumption," which is defined as the sum of (domestic production plus imports) minus exports. This may be the best estimate available, since production data are not available for all countries. Students use apparent consumption for the exercise if that is reported. It is important to note that in some annual mineral commodity summaries, the data for the most current year may be an estimated quantity. For example, for the 2018 annual summary, U.S. and world production for iron ore is denoted with a superscript "e" as in 2017e . This is because there is a lag time between publication of the summary and final verification of all data. The estimated quantity usually differs little from the final number so we have students use the most current year data even if it is estimated. Students should note the units [e.g., pounds, tons (2000 pounds), tonnes (metric tons, about 2240 pounds), grams, etc.] that are used for each commodity. All comparisons should be in the same units. We provide answers here based on the 2018 Mineral Commodity Summaries, which report data through the end of 2017. We use the estimated data (2017e ) where it is reported. An Excel spreadsheet with the worked answers is available: Simon.print article supplemental_Copy of Mineral-Consumption-Answers.xlsx (Excel 2007 (.xlsx) 19kB Apr15 19) 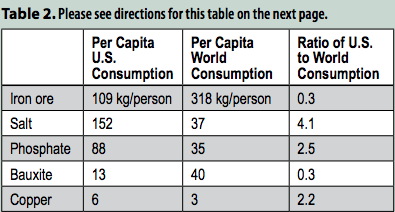 Provenance: Alexis Walters, Carleton College
Reuse: This item is offered under a Creative Commons Attribution-NonCommercial-ShareAlike license http://creativecommons.org/licenses/by-nc-sa/3.0/ You may reuse this item for non-commercial purposes as long as you provide attribution and offer any derivative works under a similar license.
Note that the world reserves for salt are not reported because in addition to mining salt from halite deposits, it is also sourced by evaporating sea water, which is thought of as an unlimited resource. The numbers from Table 1 do not mean much unless we put them into perspective. For instance, how many tons of each resource are consumed by each person in the United States and globally? To determine this, we will assume an average U.S. citizen who can be represented by a per capita figure. Students determine per capita U.S. and world consumption for each of the resources (and put them in Table 2). It is important to tell students that all material produced in a year is consumed in the same year, which is usually reasonable. Thus, world production data from Table 1 are used to calculate world consumption in Table 2.

The answers for Table 2 are calculated as follows.
1. For today's population of the U.S., use the following source http://www.census.gov/popclock/. We used a U.S. population of 328,495,642 people obtained on February 26, 2019. Divide total U.S. production numbers from column one in Table 1 by the U.S. population to complete column one in Table 2.
2. For information on world population, use the same census clock http://www.census.gov/popclock/. We used a world population of 7,555,549,095 people obtained on February 26, 2019. Divide total world production numbers from column two in Table 1 by the world population to complete column two in Table 2.
3. Now, calculate the ratio between U.S. per capita consumption and world consumption (that is, column 1 divided by column 2) and put that in the final column in the table above.

To more deeply consider U.S. consumption rates, an important question for students to answer after filling out Table 2 is: What would world production for each of these commodities have to be if the rest of the world were to increase its per capita consumption level to that of the United States? 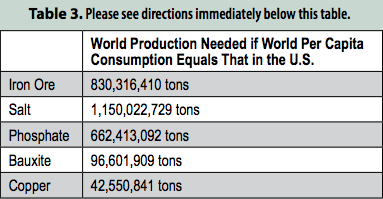 Provenance: Alexis Walters, Carleton College
Reuse: This item is offered under a Creative Commons Attribution-NonCommercial-ShareAlike license http://creativecommons.org/licenses/by-nc-sa/3.0/ You may reuse this item for non-commercial purposes as long as you provide attribution and offer any derivative works under a similar license.
The answers for Table 3 are calculated by using data from Tables 1 and 2 as follows: (World Population * U.S. Per Capita Consumption) / 1000 Students then compare numbers from Table 3 with world reserves from column three in Table 1 to assess how long the current reserves for each resource would last if world per capita consumption were equal to U.S. per capita consumption. This is often discussed in terms of how many years are left for each resource. It is important to tell the students that they are not simply dividing world reserves by world production. Rather, they are using their answer from Table 3 for World Production Needed if World Per Capita Consumption Equals that in U.S. to determine the years left for Table 4.

Provenance: Alexis Walters, Carleton College
Reuse: This item is offered under a Creative Commons Attribution-NonCommercial-ShareAlike license http://creativecommons.org/licenses/by-nc-sa/3.0/ You may reuse this item for non-commercial purposes as long as you provide attribution and offer any derivative works under a similar license.
To calculate the years left for each reserve, divide the World Reserves in column three of Table 1 by World Production Needed if World Per Capita Consumption Equals that in U.S. in column two of Table 3. The final step in this exercise is to evaluate the domestic versus international dependence for each of these natural resources. These data are provided for each resource in the respective mineral commodity summary and reported as "Net import reliance as a percentage of apparent consumption." 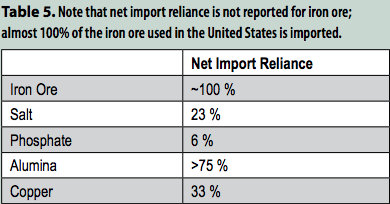 Provenance: Alexis Walters, Carleton College
Reuse: This item is offered under a Creative Commons Attribution-NonCommercial-ShareAlike license http://creativecommons.org/licenses/by-nc-sa/3.0/ You may reuse this item for non-commercial purposes as long as you provide attribution and offer any derivative works under a similar license.
The Debriefing

After students work through the exercise, it is important for them to make sense of all the data in Tables 1–5. Students tend to gloss over the units of mass and not think about their own annual use of 109 kg of iron ore or 6 kg of copper. Not worrying about density, we ask the students to think about common objects that have the same mass as the U.S. per capita consumption. We want them to visualize the amount of each resource that is mined to make their built environment possible. We put the students into small groups and have them look up five ways that each of the five resources in the tables are used by society. We specifically tell them to find uses that are not only personal uses. For example, copper and aluminum are used to build the electric grid. Iron ore is used to make steel that is the foundation for buildings and vehicles. This allows the students to develop a connection between themselves and the larger built environment in which they live. We ask students to name products and write them on the chalk board to get the whole class involved. Some products will be on the list of multiple groups, and some will be unique.

For question (a), world per capita consumption of iron ore is greater than U.S. per capita consumption because much of the developing world is rapidly increasing their built environment. For the other four resources, world per capita consumption is less than U.S. capita consumption. This tells us that for question (b), world production needs to increase for the developing world to have the same lifestyle as the U.S. Students should use Table 4 to think about question (c). The data in Table 4 tell us that for some resources, especially copper, it will be important to recycle resources that are currently in use. There are lots of resources available online that discuss recycling rates of various resources and we encourage students to seek information on this topic.It is critically important to emphasize to students that they recognize the goal of this exercise is not to make students feel guilty about their personal use of resources. Rather, the goal is for each student to gain an appreciation for the tremendous quantities of resources already in use in the developed world and what new quantities must be found and extracted for the growing population in the developing world. 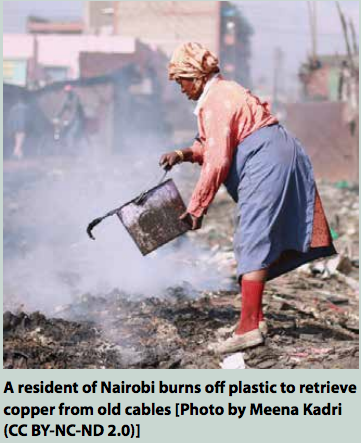 Provenance: Alexis Walters, Carleton College
Reuse: This item is offered under a Creative Commons Attribution-NonCommercial-ShareAlike license http://creativecommons.org/licenses/by-nc-sa/3.0/ You may reuse this item for non-commercial purposes as long as you provide attribution and offer any derivative works under a similar license.
Finally, engage the students in a conversation about the relationship between mineral resource consumption and the following: access to education; birth rates; poverty; life expectancy; domestic violence. Each of these is impacted by improving and expanding the built environment. This is often never part of the conversation around "mining." Students can also explore the availability of resources with an emphasis on domestic versus international availability. Wehave been very pleased with how this exercise informs students of the amount of resources that makes their lives possible. Most, if not all, students take our shared built environment for granted and it is rare that a student has given much thought to the resources that will be required for our growing global population and to build a modern infrastructure throughout the developing world. Students comment after this exercise that they never realized how much iron or copper or salt is used by the world. Students also report the exercise stimulates them to think about whether the so-called "western" lifestyle is even possible for the global population who currently lack such things as electricity, hospitals and motorized transportation. We caution students to avoid making statements like "well, maybe those people don't want my lifestyle." The observation is that the aspirational goal of the developing world is to achieve a western lifestyle. This goal requires more resources. This goal requires society to demand that mining companies extract resources in a responsible way to minimize environmental degradation.