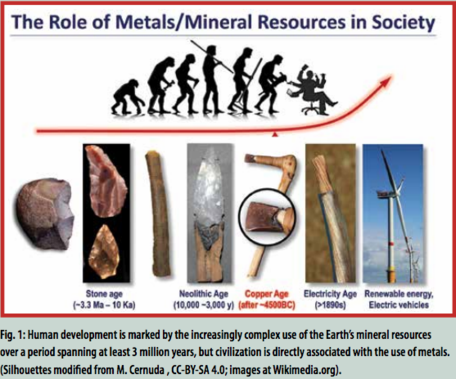 What would happen if all geoscientists stopped practicing their science? Would the average person's life change?" This rhetorical question was asked by Dorfler and Friedrich in a brief article on the "Future of Geoscience" in the January 2019 issue of GSA Today. As expected, the authors identify immediate negative impacts to society on matters such as prevention of natural hazards, availability of clean drinking water, or awareness and understanding of lead contamination. However, it is telling that, as the first casualty of the disappearance of geoscientists, they chose the discovery of new resources such as "the rare earth minerals that power our smart phones." Indeed, without economic geologists (i.e., the scientists and professionals dedicated to the study of and the exploration for mineral resources), modern society could not exist. For a few centuries—at least since the widespread use of the steam engine in the 1800s—people's lives have relied on an increasingly large and diverse supply of mineral resources. Against this backdrop, and in the context of the NAGT, it is appropriate to ask if the teaching of economic geology is keeping pace with the times: is the role of economic geology appreciated enough by geoscience teachers and within geoscience academic programs nationally and globally, and is economic geology being taught in a quantity and of a quality consistent with the many new environmental, engineering, and economic issues and concerns relevant to society today? 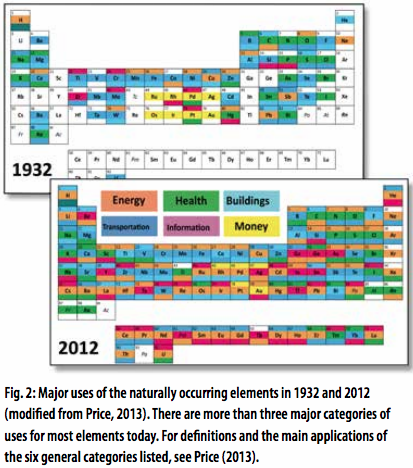 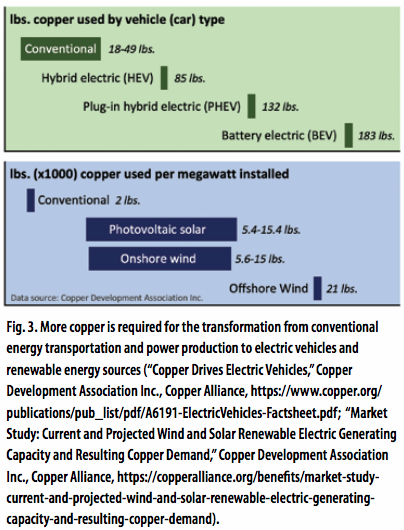 Provenance: Alexis Walters, Carleton College
Reuse: This item is offered under a Creative Commons Attribution-NonCommercial-ShareAlike license http://creativecommons.org/licenses/by-nc-sa/3.0/ You may reuse this item for non-commercial purposes as long as you provide attribution and offer any derivative works under a similar license.
The development of humanity is marked by the increasingly complex use of Earth's mineral resources. Starting with stones, clay, and bones and—with the onset of civilization—evolving to the use of metals (e.g., copper since at least 6,500 years ago; Fig. 1), this pattern has continued until today. We currently use a greater quantity and variety of metals than ever before (Price, 2013). Essentially, we now use all the naturally occurring elements in the periodic table (Fig. 2). Barring an unforeseen disruption, this trend will not change in the near future, as global population increases, living standards for most people in the developing world continue to improve, and new technologies materialize. Indeed, some new technologies are widely regarded as an integral part of the solutions to some of society's most pressing concerns, such as the changeover to non-carbon energy sources (Fig. 3).

While the topic of the future of mineral resources (and, by association, mining) is complex and subject to controversy (Arndt et al., 2017), one thing is clear: in the short to medium term, we will continue to require more metals despite continual improvements in recycling and more efficient metal use in production. Industry (e.g., car manufacturers), national governments, and supranational organizations (e.g., the European Union) all have lists of "critical metals" that are essential and work toward ensuring a reliable supply. Thus, demand for exploration and discovery of new mineral deposits, and therefore for economic geology, will continue.

Despite their critical role in everyday life, mineral resources are widely misunderstood and, all too often, society's views on the subject are disconnected from reality. These issues are illustrated by misconceptions prevalent in the media—and by extension the population—on the future of Earth's mineral resources. As an illustration, one only needs to do an Internet search to the question "Are we running out of mineral resources?" The typical result shows a series of sophisticated infographics showing countdown timers and abruptly ending bars marking the time until different commodities are exhausted. The associated titles and headlines are consistently dramatic: "Born in 2010: How much is left for me?", "World stripped bare: How long will the world natural resources last?", "If we fail to correct current consumption trends, then when will our most valuable natural resources run out?", etc.

At least two of these widely circulated articles and graphics originate from well-known sources. One was published in issue 2605, 26 May 2007, of the international science magazine New Scientist. In it, the author claims that, based on data by researchers from Yale University and the University of Augsburg, "if predicted new technologies appear and the population grows, some key resources will be exhausted" within what is graphically shown as an alarmingly short time frame. Among the mineral resources covered, platinum, indium, and copper are particularly illustrative of the grave errors of interpretation contained in the article. For example, humankind should be running out of platinum three years from now (15 years from 2007). However, despite production of 2,000 metric tons of platinum between 2007 and 2017 and a metal price drop of 26 percent, the global reserves of platinum group metals have decreased only by 2.8 percent (Arribas, 2018). Likewise, according to this report we should have run out of indium sometime between seven and two years ago. Never mind that, as a key component of indium tin oxide (ITO), this metal has been present as a transparent thin film conductor in the touch screen displays of every smartphone and tablet manufactured since 2007—including the 1.2+ billion iPhones sold by Apple alone since its release on June 2007, a month after publication of the New Scientist article. A second article selected, "Global resources stock check" (BBC-Future, June 2012; http://www.bbc.com/future/story/20120618-global-resources-stock-check) states that the world supplies of indium, antimony, and copper, to choose three, will last through 2024, 2020, and 2044, respectively. I would argue that nothing but common sense is needed to believe that by the time of the Paris Olympiad in 2024, ITO-based transparent thin film conductors (or a new, and likely superior, substitute) will continue to be present in digital displays and thin film photovoltaic cells, among many other applications.

No, we will not run out of metals, like copper, indium, or platinum and palladium any time soon. Indeed, the U.S. Geological Survey has resource estimates of hundreds of years for most metals, solely based on known deposits. For the foreseeable future, the reserves of most metals are controlled by economics, technology, geopolitics, etc., and not by absolute limitations of availability in nature. Misconceptions can begin to be addressed by ensuring all university-trained geologists, not just those specializing in economic geology, learn key concepts such as the difference between a mineral resource (metal in the ground) and a mineral reserve (metal quantity defined by extensive drilling to a regulatory assurance and economically extractable), just as geologists learn the difference between contact and regional metamorphism or between a silicate and a carbonate rock.

Due to its own limitations and challenges and possibly by its association with mining, in the last three decades the discipline of economic geology in academia in the United States and elsewhere has suffered a series of setbacks. Fewer teachers with real-life experience in the mineral resources sector exist at colleges nationwide. Consequently, with notable exceptions, economic geology education runs the risk of either focusing too narrowly on the geology of ore deposits (vs. a more practical approach; see below) or being a minor addendum within an Earth sciences curriculum, if included at all. Both ends of the spectrum are inconsistent with the far-reaching impact economic geology and mineral resources have on society, the economy, and the environment. We need more, and especially more practical, economic geology education, the kind of education that can be provided by any geoscience teacher with an interest in the subject and a commitment to the professional development of their students.

An illustration of the diminishing role of economic geology in Earth science education is evident by reviewing the content of some of the most popular introductory geology textbooks (e.g., Marshak, 2015; Tarbuck and Lutgens, 2015). As measured by the number of pages dedicated to the subject, only between 1% and 3% of the content of these otherwise exhaustively researched and beautifully written and illustrated textbooks deals with economic geology, including mineral resources and society, types and formation of mineral resources, aspects of mining, etc. Coverage several times greater is appropriate and not only because of the timely and far-reaching impact of economic geology within society. More specifically, economic geology deals with the end product of the widest possible spectrum of geologic processes over the complete evolution of the Earth, and mineral deposits capture this evolution (including the initiation of subduction recycling, redox conditions of magmas and the atmosphere, and uplift and weathering, to mention only a few aspects of Earth history recorded by mineral deposits). Indeed, Waldemar Lindgren (1933, p. 894) said it best: "In one aspect the science of mineral deposits is frankly utilitarian, but from the viewpoint of pure knowledge it records the principles governing the cycles of concentrations of the elements. It traces the processes by which the primeval gases and magmas have become differentiated into the manifold complexity of the earth's crust."

Mineral resources play a critical role in society, and their key concepts should form part of geology curricula everywhere. Unfortunately, the facts about mineral resources are all too often lost within media (news as well as social) permeated by biased views and misinformation. Higher education, particularly introductory courses, therefore needs to be less about transferring facts and more about helping students gain perspective (see A. Simon's contributions to this issue in the third article), in order to distinguish between sources of information, be able to plan and conduct research, and communicate knowledge.

Economic geology education must include adequate attention to the economic, environmental, and societal issues associated with mineral resources and their development. While providing such a context has always been necessary, I believe it is urgent today. Without it, the ability of geoscience students to understand their own future roles within academia, industry, or government will be limited, and their ability to communicate more widely with society will be compromised (see the online article by J. Price on the "Varied Roles of Geoscientists in Mining" in Online Extras). Once this "big picture" view is provided, specialized economic geology courses can focus on ore geology science and ore-forming processes. Ultimately, the purpose of geology to society is understanding the Earth, with a main objective of better management of its natural resources, whether it is the fragile hydrosphere and associated global climate or sturdy and wonderfully useful copper and other metals.

Note: This article borrows from another in the Newsletter of the Society of Economic Geologists (Arribas, 2018). Additional readings and resources may be found in the online edition of this issue of ITT (see Online Extras on main page). [end medium small]

Among the recent textbooks or publications that offer a broad, practical view on the topic of mineral resources, I highlight the following:

I believe that exposure to the subject matter in any of these publications will directly benefit all earth sciences students, as well as students in environmental, sustainability, engineering, economics and policy/government programs that deal directly or indirectly with natural resources.

A little history: The study of mineral deposits and the advent of modern geology

Arribas, A., 2018, Making the case for more, and more practical, economic geology education: the point of view of an exploration geologist: SEG Newsletter, no. 13, p. 12-16.

Price, J.G., 2013, The challenges of mineral resources for society, in Bickford, M.E., ed., The Impact of the Geological Sciences on Society, Geological Society of America Special Paper 501, p. 1–19.