Critical zone science is interdisciplinary and place-based. Helping students draw deeper connections between social and ecological forces driving changes at the Earth's surface requires pedagogies that bridge natural sciences, social sciences, and the humanities. Here, we describe the use of Esri Story Maps as a framework for developing and delivering interactive inquiry-based activities based on data from the Calhoun Critical Zone Observatory located in the southern Piedmont of South Carolina (CCZO).

Environmental narratives in the Southern Piedmont

Like much of the Southern Piedmont, the Calhoun CZO was severely impacted by agricultural soil erosion and water degradation during the 18th, 19th, and early 20th centuries. In all, more than 10 million hectares of the southern Piedmont was severely eroded, limiting the cultivation of many crops. Abandoned farms regrew as pine forests that provide modern visitors to the region an impression of ecological productivity. Yet, the legacy of past land uses still impact ecosystem function and water quality, raising important questions about long-term soil productivity, land management, and ecosystem services (Richter et al., 2014).

Engaging students in environmental narratives of changes in land at the Calhoun CZO requires pedagogical approaches that ground datasets within environmental and cultural landscapes and that cultivate a sense of place. This approach provides students with an understanding of the geographic location of the Calhoun CZO as well as an appreciation for what is distinctive and representative about human-landscape interactions at this location (Kudryavstev et al., 2012). The importance of interdisciplinary perspectives is apparent in the Calhoun CZO, which brings together natural scientists, social scientists, and humanities scholars to examine how the critical zone of the southern Piedmont has both influenced and responded to human management.

Provenance: Historical photos courtesy of the USDA Forest Service (as published in Nelson et al., 2016)
Reuse: This item is offered under a Creative Commons Attribution-NonCommercial-ShareAlike license http://creativecommons.org/licenses/by-nc-sa/3.0/ You may reuse this item for non-commercial purposes as long as you provide attribution and offer any derivative works under a similar license.
Esri Story Maps is an innovative, cloud-based application that allows developers to combine authored maps with story elements of text, imagery, multimedia, pop-up menus, and HTML links, all to create interactive, engaging stories that are geographically and spatially organized. The suite of applications is designed to interface with ArcGIS online, a web-based mapping platform that allows developers to create, store, and access maps and data. The interface for users of existing Story Maps is freely available and intuitive; working with Story Maps in the classroom requires no specialized software or prior experience with GIS. Those educators wishing to create their own Virtual Field Experiences using Story Maps have access to extensive support through templates, examples, and online tutorials.

Story Maps can be used to support inquiry-based education in ways that are consistent with best practices in Earth science and environmental education. In a study of K-12 teacher perceptions of ESRI Story Maps as a teaching tool (Strachan and Mitchell, 2014), more than 95% of respondents found Story Maps to be user-friendly, interactive, and engaging, with 87% agreeing that their students would enjoy using Story Maps. These findings were similar to those of Battersby and Remington (2013) in which undergraduates reported high levels of engagement and interest through the creation of original Story Maps. The visual nature of the maps combined with text provides many opportunities for promoting spatial literacy through storytelling in ways that bridge language and culture (Strachan and Mitchell, 2014).

Esri Story Maps reveal the biophysical and cultural landscapes in the Southern Piedmont, making them an ideal platform for education and outreach (https://storymaps.arcgis.com/en/). At the CCZO, inquiry-based classroom and laboratory modules for undergraduate and advanced high school levels are being developed in collaboration with Calhoun investigators and incorporate updated or real-time datasets, maps, and case studies (O'Neill and Richter, 2016). Modules will follow a narrative arc embedded within a series of Story Maps to place critical zone processes within the broader context of landscape development and environmental history. As one example (Fig. 1), historical photos taken by the USDA Forest Service from the 1930–1980s and digitized by Nelson et al. (2016) were paired with current research photos taken from adjacent locations using the Map Tour template to help provide students with a deeper sense of the 60-year research history at the Calhoun CZO. In a second example (Fig. 2), a mosaic of historical aerial photographs (Brecheisen and Cook, 2017) was overlain with a contemporary satellite image using the "Spyglass" template on Esri Story Maps. This template provides students with a virtual window into the changes ongoing in the biophysical landscape and land use patterns over nearly 80 years. Additional Story Maps under creation will interweave datasets and lab activities with photos and multimedia to explore specific topics such as soil erosion, hydrology, and carbon cycling using the Map Journal template and embedded hyperlinks. Published Story Maps are available on the Calhoun CZO website (http://criticalzone.org/calhoun/). 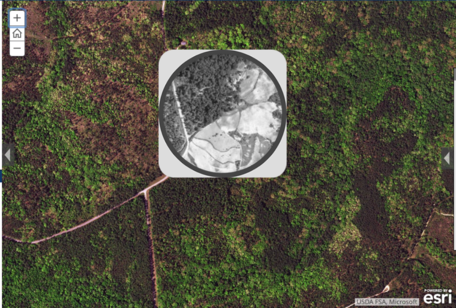 Reuse: This item is offered under a Creative Commons Attribution-NonCommercial-ShareAlike license http://creativecommons.org/licenses/by-nc-sa/3.0/ You may reuse this item for non-commercial purposes as long as you provide attribution and offer any derivative works under a similar license.
The pedagogical framework for Story Maps at the CCZO integrates the themes outlined by Kastens and Manduca (2012) by creating learning opportunities that are derived from observations of natural systems, are geographically and spatially organized (place-based), reflect a long-term perspective, and address complex phenomena from a dynamic systems perspective. The Story Map framework also directly aligns with national CZO outreach efforts to create Virtual Fieldwork Experiences (VFE) that promote student inquiry into critical zone processes and the development of "interdisciplinary understandings of place" (Duggan-Haas, 2016, p. 18). The ability to integrate text, maps, and data provides opportunities for instructors to combine VFE and case study methods to promote critical thinking and interdisciplinary problem solving in socio-ecological systems (Wei et al., 2015).

The environmental narrative of environmental degradation and regeneration in the southern Piedmont provides a rich opportunity for exploring the interconnections between human well-being and the health of the land itself. Esri Story Maps provide a framework for creating visually-appealing, interactive learning opportunities within the broader context of land management and environmental history in ways that promote student engagement and are consistent with best practices in Earth and Environmental Science education.

Work described in this paper was funded by the National Science Foundation Award (EAR 1331846) to Duke University and Roanoke College.

Kastens, K. and, Manduca, C.A., eds., 2012, Earth and Mind II: A Synthesis of Research on Thinking and Learning in the Geosciences: GSA Special Paper 486.