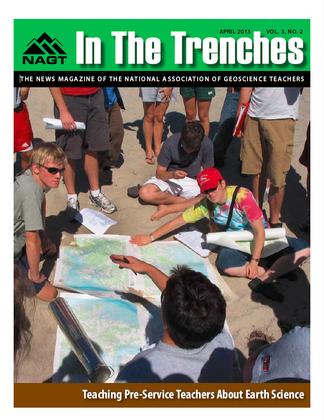 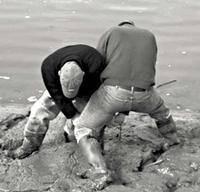 Abstract: The connections between science and society can be used to teach pre-service teachers about science through field trips/fieldwork experiences. This project involved a group of pre-service science teachers who were engaged in examining environmental concerns associated with the presence of heavy metals in their local water supplies. As part of an elementary science methods course, 19 pre-service teachers were divided into groups that conducted fieldwork in a local park. The groups identified environmental problems associated with heavy metals in local river sediments and in park soils. The pre-service teachers collaborated with students in an undergraduate geochemistry class as they collected soil and river sediment samples, collecting other data onsite, and analyzed river water samples. The goals of the project were to introduce all participants to field and laboratory methods, local environmental issues, and the value of working with community partners. A follow-up attitude survey indicates the experience helped the pre-service teachers to recognize that science doesn't only happen in a laboratory environment, and to realize the value of using local community issues to help teach science. The results of this study suggest that all pre-service teachers should have the opportunity to be involved in outdoor settings conducting inquiry activities. These types of experiences reinforce the value of connecting community issues and effective teaching strategies to local environmental concerns.

Turning the Tables: Assigning Reflective Writing in an Introductory Earth and Space Science Course with pre-Service Teachers Who Don't Like Science

"Political officials in some states are beginning to recognize the need for Earth and Space science education across the K-12 curriculum. Case in point: In 2010 Iowa changed teacher certification requirements for K-5 education so that they include a three-credit Earth and Space Science (E&SS) course. In response to this requirement, we developed a hybrid course consisting of a two-credit online component and a one-credit, two-hour lab (Cervato et al., in press) that could serve as a model for others. The students enrolled in this introductory level course are primarily freshman and sophomore elementary education majors. Because of lab space limitations and in order to ensure a manageable student-to-teacher ratio, enrollment is limited to 48 students. The focus of the course was on engaging the students using multiple learning techniques such as active learning, simple experiments using low budget materials, and the use of Google Earth Geotours (Wilkerson et al., 2012)."

"It is easy to look at the rapid proliferation of mobile devices in the classroom with some degree of consternation. Cell phones going off in class, students texting during lectures, the seductive nature of online diversions, and the rate at which today's devices become tomorrow's dinosaurs can be quite frustrating. So much so that it is tempting to see these devices largely as a hindrance to what we are trying to accomplish in the classroom." 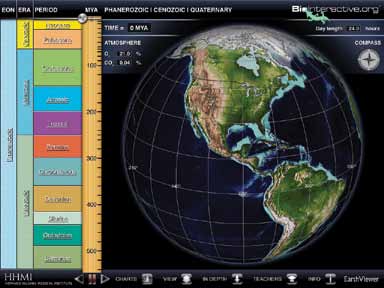 ×
EarthViewer - An App Worth Trying

In his column on using tablets in Earth science education (see Page 11), Frank Granshaw points out how mobile technologies are impacting students and faculty. If you want to see a good example, download and the install the free EarthViewer App for iPad by the Howard Hughes Medical Institute. With this app, students can explore Earth's history using an easy-to-use interface with excellent graphics that quickly zoom and pan out. They can watch Phanerozoic plate reconstructions from any perspective on the globe while using city locations to help orient them as land masses move. They can also add some key events in Earth's history such as major impact events, significant biological events, and mass extinctions. Users can also add semi-transparent charts to track temperature, oxygen levels, carbon dioxide levels, and biodiversity changes across time. When questions arise, students can refer to the "In Depth" button for more information. Faculty will find this app a simple-to-use learning object for demonstrating a variety of geologic time principles in introductory courses.

NAGT Sessions at the 2013 GSA Annual Meeting and Exposition

Make plans now to present your findings at education-related sessions sponsored by the National Association of Geoscience Teachers at the 125th Annual Meeting of the Geological Society of America, October 27-30, 2013, in Denver, Colorado. While there, make your way to the NAGT booth to catch up with colleagues.

This site examines the role of geoscience departments and faculty in preparing preservice teachers and supporting practicing teachers who teach Earth science at all pre-college levels. The site features

The methods and ways of thinking that are intrinsic to Earth science differ in important ways from the experimental procedures that are commonly taught in schools as the scientific method.

K12 Science is SERC's portal for K-12 Educators. The portal looks across all the project websites hosted by SERC to find the activities and resources of highest interest to K-12 educators. On this site, there are hundreds of classroom activities organized by grade level and topic as well as guidance on effective teaching. Many of these resources were expressly developed with a K-12 audience in mind. Others can be adapted to K-12 classrooms even though they were originally developed with a college audience in mind.

The Education and Policy page on NAGT's website gives members information on how the organization it working to influence national conversations that impact geoscience education at all levels as well as how members can become active and make their own voices heard. Resources include: