The NAGT Distinguished Speaker Series was one of the most visible and direct services of the Association. Members at colleges, universities and other academic institutions were able to apply to have one of our featured researchers on the cutting edge of geoscience education research and teaching visit their institution to deliver seminars, workshops, and in-person consultation with researchers and geoscience departments. Speakers and their topics were as diverse as our membership, and the offerings were updated every year to reflect the latest developments in the field and the concerns of our membership.

The Distinguished Speaker Program was suspended in 2011. NAGT redesigned the program in combination with the Building Strong Geoscience Departments Traveling Workshops to create the
NAGT Traveling Workshops ProgramSee that program for the opportunity to bring exciting professional development opportunities to your campus or institution . 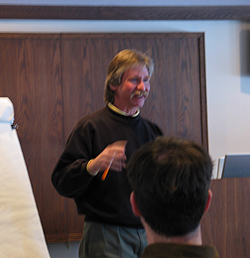 "This lecture opened up a dialogue between our department and the community and we plan to use [it] as a kick off for a semester long series of evolution-themed lectures for our community."

A committee of NAGT representatives oversaw the program and selected each year's roster of speakers. Members of the committee were charged with

The committee included the First Vice-president, second Vice-President, the Editor of the Journal of Geoscience Education, two past Distinguished Speakers and an at-large member, with the Executive Director as an ex officio member.