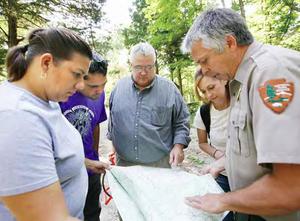 The program was expanded from three to four slots for the summer of 2009 as a result of the resignation of one individual selected in 2008. Money originally designated for his position was allowed to be carried over to the 2009 program. This allowed all teacher interns to work in pairs – a situation that provided improved personal safety; enabled MACA to offer an expanded list of research possibilities; and allowed the teachers to choose areas of research more in line with their personal preferences, interests, and professional / classroom needs and requirements.

The four individuals faced a time limitation this summer. An early spring ice storm had closed area schools for 1-2 weeks. This, along with normal snow and/or flu closures, pushed the final school year closing from mid-May into June. Fewer summer "vacation" hours were thus available for the interns to complete their basic requirement of 200 program hours. All four 2009 Interns worked weekdays, evenings and weekends in order to complete the required research hours prior to school openings scheduled for the last week of July.

As a mark of their interest and enthusiasm, each of the 2009 Intern teachers have returned to the park several times since the start of their new school year to continue working on several projects begun during the summer program – notably the setting and retrieving of dye "bugs" used in cave hydrologic studies; with ongoing identification, monitoring and eradication of alien and invasive species in a karst prairie restoration project; and to collect temperature / relative humidity data changes along cave passageways.

The 2009 program has provided an opportunity to expand the park's citizen science and volunteer capability directly because the involvement of these teachers. One of our summer Interns brought his nephew (a college senior hydrology major) to the park as a volunteer for approximately 160 hours of work on cave hydrology. One Intern brought her class to assist with an invasive species eradication program. One Intern brought her class to the park to collect relative humidity data in Great Onyx Cave. One Intern has requested a partnership between his elementary school and the Mammoth Cave Environmental Education Office. A high school student of one Intern has accompanied her teacher after school to collect hydrologic dye "bugs" placed in pools and streams along approximately six-miles of cave passages. 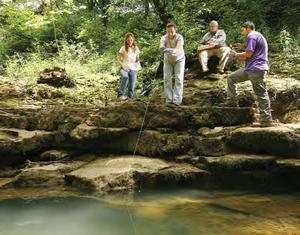 During the summer of 2009, the Geoscience-Teachers-in-the-Park Interns worked on a variety of projects:

What activities are planned for the academic year?

Specific activities that have already taken place during this academic year include:

Planned ways to share the Geoscience Teacher-in-the-Park experience with students: