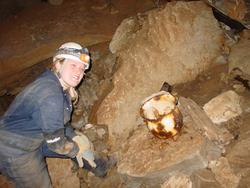 Hide
This image shows Meg Finn at Mammoth Cave in the summer of 2006. Ms. Finn was a participant in the NAGT-sponsored Geoscience Teachers in the Park Program and is an 8th grade science teacher at Grayson County Junior High in Leitchfield, KY. Details

Mammoth Cave National Park was fortunate to have two middle school science teachers participate in the Geoscience Teachers in Parks pilot program in 2006. Meg Finn, an 8th grade science teacher at Grayson County Junior High in Leitchfield, KY assisted the park's environmental education coordinator in leading and conducting a week-long Robinson Scholar Workshop for high school science students (June 12-16, 2006). Dianne Piper, an 8th grade teacher at Caverna Junior High School, in Cave City, KY, assisted a bat gate specialist with evaluation of cave openings, to determine which caves provided habitat for endangered bats and possessed unique karst resources. This information was used by the park to determine which cave entrances to gate. Together, the teachers developed, assembled, and wrote an annotated list of fossils found along the Historic and Frozen Niagara tour routes within Mammoth Cave, where such information could be used in public outreach programs. They worked with science and resource management staff to assess lesser cave entrances, including the presence of unique biota and resources. Each teacher prepared and presented a presentation of their GTIP experience to the park Superintendent. Both teachers have taken their experiences in the park to their classrooms and are incorporating their new knowledge and experience into their classroom curricula. 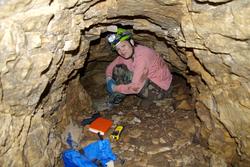 Hide
This image shows Dianne Piper at Mammoth Cave in the summer of 2006. Ms. Piper was a participant in the NAGT-sponsored Geoscience Teachers in the Park Program and is an 8th grade science teacher at Caverna Junior High School, in Cave City, KY. Details

As a follow-up to the summer Geoscience Teacher in the Park program at Mammoth Cave National Park, Meg Finn, an 8th grade science teacher returned to the park during the 2006/2007 school year with her students to enrich her student's science education. Meg and her students did a karst surface hike looking at specific features that are found in a karst landscape; they traveled almost one mile inside one of the park's biological monitoring caves and examined horizontal & vertical passages, dry and wet passages with cave formations and underground deserts. She also took them to a local nature preserve to look at fossils and forest succession in a karst landscape; and to Western Kentucky University to participate in a water quality lab where they we able to test water for various pollutants. Meg's classroom was "stuffed" with rocks and fossils, etc. and she had the park's environmental education staff come to the class several times throughout the year to present programs on karst geology, fossils, and weather.

Dianne Piper enriched her 2006/2007 classroom experiences with multiple visits by Mammoth Cave National Park Environmental Education as well as Science and Resource Management staff who were able to share information on weather patterns, fossils, cave ecology, and Birds-of-Prey. She and her students participated in a ranger-led hike through the national park to look at and study surface features representative of a karst landscape. They also went into one of the park's biological monitoring caves to examine the underground manifestation of the karst features seen on the surface—including horizontal and vertical passages; wet cave passages with accompanying speleothem formations; dry passages and underground deserts. Her class also visited Brigadoon Nature Preserve to look at fossils and forest succession in a karst landscape; and to Western Kentucky University to participate in a water quality lab where they were able to test water for various pollutants.

In addition, Ms. Piper was instrumental in initiating a partnership between the Caverna High School and the Mammoth Cave International Center for Science and Learning for the 2007/2008 school year. This partnership will allow advanced biology students from the high school to work closely with both the Mammoth Cave Learning Center staff and with park scientists to examine the real-life applications of scientific method . The resulting class will include hands-on and direct participation in on-going park research as well as in-depth lessons on current and planned research needs and projects.