The Coolest Mixing Process in the Ocean

MIRJAM SOPHIA GLESSMER (mirjam.glessmer@tuhh.de) is coordinator of teaching innovation in the Center for Teaching and Learning, Hamburg University of Technology, Hamburg, Germany. 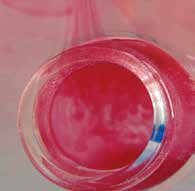 Provenance: [Photos by Mirjam Glessner]
Reuse: This item is offered under a Creative Commons Attribution-NonCommercial-ShareAlike license http://creativecommons.org/licenses/by-nc-sa/3.0/ You may reuse this item for non-commercial purposes as long as you provide attribution and offer any derivative works under a similar license.
When you think about "mixing" in the ocean, you probably think of mixing induced mechanically by crashing breakers, propellers of large ships or schools of fish. While that kind of mixing is happening a lot, especially near the surface of the ocean, there are other kinds of mixing that most people don't know about.

For example, salt fingering happens in certain parts of the world's oceans where warm, salty water occurs above cold, fresh water. "Warm" and "cold," "salty" and "fresh" are relative terms here — in the ocean "warm" water might only be a tenth of a degree warmer than "cold" water and "salty" water might not differ very much from "fresh," either. The most important part here is that the water on top — even though higher in salinity — must have a lower density than the water at the bottom. This means that the differences in temperature and salinity should be such that the influence of temperature on density is larger than that of salinity.

You can easily watch this kind of mixing in a mesmerizing experiment: 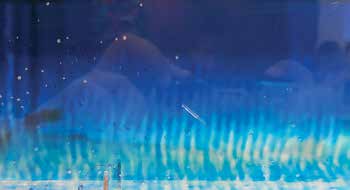 Provenance: [Photos by Mirjam Glessner]
Reuse: This item is offered under a Creative Commons Attribution-NonCommercial-ShareAlike license http://creativecommons.org/licenses/by-nc-sa/3.0/ You may reuse this item for non-commercial purposes as long as you provide attribution and offer any derivative works under a similar license.
Take a large, clear container and fill it with cold, fresh water. Leave enough space in the container so it won't overflow later! Then take a small, clear bottle (ideally one you can close off with your thumb) and fill it to overflowing with water as hot as you can bear to touch. Add a couple of drops of food dye and shake well. In this experiment, we replace salt with food dye because its influence on density is similar enough and, in contrast to "real" salt, we can watch how it slowly mixes into the fresh water!

Now insert the bottle into the large, clear container and lay it on its side on the bottom of the container. Some of the hot water is going to flow out and rise to the surface of the larger container. The rest will be trapped inside the little bottle. Now you have created two interfaces between hot water and cold water, one near the surface of the large container and one inside the small bottle, and you will quickly see salt fingers forming.

As you watch the dye slowly mixing throughout the whole volume of water, you can also feel the temperatures adjusting to each other by sliding a finger carefully down the sides of the container.

You can also do this experiment on a larger scale, while carefully measuring temperature and salinity, but the small-scale experiment is a lot easier to set up and repeat as needed and anyone watching the experiment is guaranteed to be fascinated and keen to learn more about ocean physics.

For more information on this and other experiments, check out my blog "Adventures in Oceanography and Teaching" at http://mirjamglessmer.com/blog.