MIRJAM SOPHIA GLESSMER (mirjam.glessmer@tuhh.de) is coordinator of teaching innovation in the Center for Teaching and Learning, Hamburg University of Technology, Hamburg, Germany. 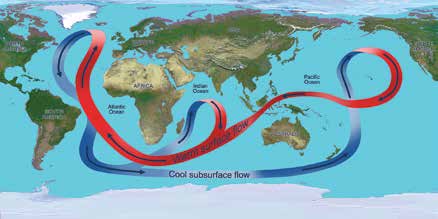 ×
One of the most basic concepts in oceanography is the "great conveyor belt" – a current that spans the world's oceans. It flows as a warm surface current towards the North Atlantic, where it cools, sinks and finally returns southward near the bottom of the ocean. Water is transported back to the surface through mixing processes in several ocean regions. While some part of the conveyor belt is wind-driven, a large part can be explained by the water sinking due to cooling at high latitudes.

An experiment detailing the physics behind this circulation can be useful in many different settings. It can be used in science outreach to catch people's attention and raise an interest in oceanography. In K-12 classrooms, it provides an opportunity to talk about the physics behind density, convection, heat, or about the ocean and climate, and at the university level, it can provide an opportunity for students to practice writing lab reports or talk about the scientific method or the validity of simplifications in theoretical or physical models.

This experiment requires a clear, large plastic container (such as a storage box) for the "tank," lukewarm water, red and blue food dye, an ice cube tray, and access to a freezer. Ideally you should also have an insulated container of some sort in which to keep your ice cubes frozen until you start running the experiment.

To prepare the experiment, mix some blue food dye into the water that you put in the ice cube tray, and freeze the ice cubes.

Begin the experiment by filling your "tank" with lukewarm water and letting it settle for a bit. Let one end of the tank be the "equator." There, add some red food dye (see Figure 1). Then add the blue ice cubes to the "poleward" end of the tank (see Figure 2). 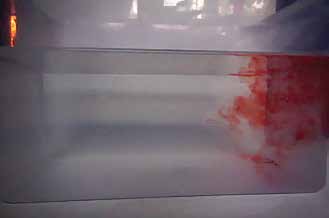 ×
Figure 1: Tank with luke warm water. Red food dye added to the "warm"/"equator"end of the tank. 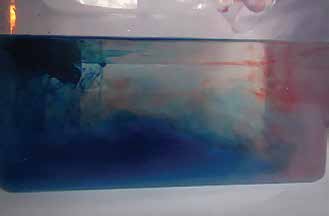 ×
Figure 2: Blue ice cubes melting at the poleward end of the tank. The cold melt water sinks to the bottom of the tank and then spreads "equatorward."

The cold melt water from the ice cubes is denser than the lukewarm water in the tank and therefore sinks to the bottom of the tank where it spreads "equatorward," pushing below the warmer water. The blue water pushes the red water upwards and "poleward." The tank will fill with a layer of cold water at the bottom and the circulation will stop once all the ice has melted.

Of course, the processes at play here are not exactly the same as in the real ocean. For one, deep water formation is not due to ice cubes melting in lukewarm water. Heating and cooling are represented in an extremely simplified way in this experiment. Also, the mixing processes that in the real ocean bring deepwater back to the surface are not represented here.

Yet, this experiment is a great first step to help students become intrigued by the ocean and understand ocean circulation. Seeing the melt water sink from the ice cubes is fascinating no matter how little interest one might have in the physics that cause it. Sliding a finger up and down the side of the tank lets students experience – feel! – how the temperature changes from warm near the surface to very cold near the bottom. Having the physical sensation of temperature change is much more impressive than simply watching the experiment or even just being shown an image of temperature sections of the ocean. And the experiment invites students to play: What if you add little pieces of paper on the water surface? Would you see them move with the flow toward the cold end of the tank? If you drop a dye crystal in the middle of the tank, would the dye ribbon that forms be deformed by the currents in the tank? And what if you add twice as many ice cubes, would the currents be twice as fast?

This is pretty much the easiest experiment you can imagine. If you are afraid of what food dye might do in the hands of your pupils you don't need to let them handle it even when they are working in MIRJAM SOPHIA GLESSMER (mirjam.glessmer@tuhh.de) is coordinator of teaching innovation in the Center for Teaching and Learning, Hamburg University of Technology, Hamburg, Germany. small groups with individual tanks – just go around dripping the dye in and then add the dyed ice cubes. While someone might still tip over a tank and spill the water, this has yet to happen to me. And apart from making sure that the ice cubes are frozen when you want to run this experiment, there is nothing that can go wrong. So why not try this experiment next time you want to talk about global ocean circulation?

For more information, watch the video of this experiment at https://vimeo.com/144365223, or check out my blog "Adventures in Oceanography and Teaching"at http://mirjamglessmer.com/blog/.