Our energy system is complex and changes to the system like fracking for oil and natural gas have effects that ripple throughout the system. Fracking is also notoriously polarizing, and teaching about such issues requires special attention to avoid reinforcing misconceptions. Providing accurate information is necessary but insufficient for teaching and common strategies often backfire (Cook and Lewandowsky, 2011). One promising strategy for avoiding backfire is to "hit between the eyes" with hard-to-deny evidence (Kuklinski, 2000). Mathematics plays a fundamental role in "hitting between the eyes."

Much of the mathematics required is remarkably basic — simple statistics on energy production and usage can directly challenge and alter perceptions of where our energy comes from while providing insights into impacts of energy development. We share three ways to bring basic mathematics to instruction: through sharing counter-intuitive information about regional energy use; through the use of "social mathematics" to make large numbers comprehensible by placing them in a social context that gives them meaning (Wallack, 1999); and using basic statistics related to induced seismicity from the disposal of waste-water from oil and gas production. 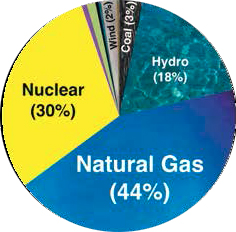 Provenance: US Energy Information Administration http://eia.gov
Reuse: This item is in the public domain and maybe reused freely without restriction.
Data in this section is drawn heavily from the Energy Information Administration website, http://eia.gov. What follows focuses upon New York, but by clicking the "geography" tab at eia.gov, data is available for every state. Starting with the local energy system in fracking-related instruction adds relevance and the EIA site makes this simple.

For several years, PRI has offered a range of educational programs related to fracking. This includes public lectures, classroom visits, and educator professional development programming for K-12 teachers, college and university faculty, cooperative extension educators, and nature center educators. Educators worked together over in two cohorts over the course of a year. All of these programs began with a simple question: What are the two largest sources of energy for electric generation in your state? Noting that the four largest sources for the US in alphabetical order are: coal, hydroelectric, natural gas, and nuclear power, we ask participants to respond by show of hands as the list is projected on a screen. (Find online versions of the mini-quiz here: http://bit.ly/State_e-Quiz and the presentation here: http://bit.ly/MarcellusGateway). The majority of respondents (over 2,500) have been New Yorkers and fewer than 5% have correctly identified both natural gas and nuclear as the largest sources of energy for electric generation within the state. The data for 2012 is shown in Figure 1, and is available from the Energy Information Administration website at: http://www.eia.gov/electricity/data/state/annual_generation_state.xls.

Modal responses are coal and hydro. Hydro is the third largest source, and coal and wind are now roughly tied for fourth place with about 3% each. This is an eye-opener for most program participants.

Figure 1 and the related question refer just to electric power. Space heating is also a major energy use and most New Yorkers heat their homes with natural gas. Thus, when we consider total energy use, about twice as much energy in the state comes from natural gas as from the second largest source (gasoline). While there are roughly 100,000 gas wells in New York State, by state regulation, they cannot be hydraulically fractured with more than 300,000 gallons of water.1 This means that New York wells are small in comparison to horizontal high volume hydraulically fractured wells in neighboring Pennsylvania. New York's wells collectively produce about 3% of state demand. Gas production in Pennsylvania increased 17-fold between 2007 and 2013, making it the second largest producer in the country. As a result, much of the gas now used in New York comes from fracked wells despite the state's ban on the practice. This approaches a "hit between the eyes." 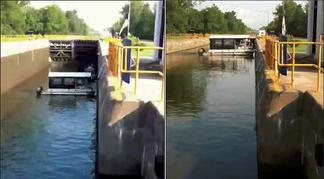 Provenance: Don Duggan-Haas, Paleontological Research Center
Reuse: This item is offered under a Creative Commons Attribution-NonCommercial-ShareAlike license http://creativecommons.org/licenses/by-nc-sa/3.0/ You may reuse this item for non-commercial purposes as long as you provide attribution and offer any derivative works under a similar license.
Fracking, like many energy issues, brims with very large numbers. These abstractions are difficult for most people to grasp, and the numbers do matter. Social math contextualizes large numbers in comprehensible settings (Wallack, 1999). About four million gallons are required to fracture the typical Pennsylvania Marcellus Shale well. Clearly, that's a lot, but how much water is four million gallons? Figure 2 highlights a way to visualize millions of gallons of water by using a short video. It takes less than a minute to play the video twice to show the approximate amount of water used to fracture a typical Pennsylvania Marcellus Shale gas well.

Significant recent media attention highlights increased earthquake activity in several areas in the US where there is active oil and natural gas production and disposal of associated wastewater in deep wells. In Oklahoma, the rate of magnitude 3 and larger earthquakes in 2011 was 28 times the average rate from 1975-2008 (Rubinstein and Mahani, 2015). See Figure 3. 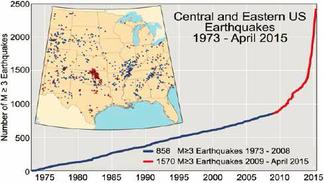 Hide
Figure 3: Cumulative number of earthquakes with a magnitude of 3.0 or larger in the central and eastern United States, 1973-2015. The rate of earthquakes began to increase starting around 2009 and accelerated in 2013-2014.

Provenance: [Figure from Rubinstein and Mahani (2015)]
Reuse: If you wish to use this item outside this site in ways that exceed fair use (see http://fairuse.stanford.edu/) you must seek permission from its creator.
Can mathematics be used to establish a correlation between fracking and the increased earthquake activity? One can first compare the distribution of production wells where fracking is used to earthquake distribution, and then compare those distributions to disposal wells' locations. (For an example exercise, see Bringing Seismology's Grand Challenges to the Undergraduate Classroom.) The correlation of seismicity to disposal wells is better than to production wells, but most disposal wells don't have nearby earthquakes. Thus disposal wells appear to increase the likelihood of earthquakes, but other factors must be involved as well. Identifying and quantifying those factors is an area of active research.

The next question is whether the increase in fracking is driving an increase in wastewater injection. It turns out that while it may play a part, fracking fluids typically make up less than 10% of wastewater. Thus the increase in the volume of disposal well fluids and the associated induced earthquakes are likely to be due more to changes in conventional oil production than to hydrofracking.

Relatively simple mathematics quickly highlights the complexity of decision-making related to our energy system and can facilitate meaningful comparisons of impacts related to different energy choices.

1 Fracking itself is not actually banned in the state – the ban prohibits high volume hydraulic fracturing.