Policy Conference on Fracking: A Fun and Engaging Teaching Tool

DARRICK EVENSEN (evensend@cardiff.ac.uk) was, until recently, an assistant professor of environmental studies at Oberlin College, Oberlin, Ohio. He is now a researcher in the School of Psychology at Cardiff University, Cardiff, Wales, UK. 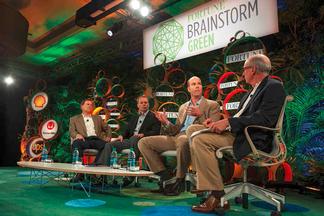 ×
Shale gas and oil development via high-volume hydraulic fracturing has major environmental, economic, and social implications; it has also raised heated debates in public and political discourse throughout the United States and several nations globally. When teaching about fracking, a major challenge is conveying the natural, physical, and social scientific research while also helping students understand the policy process through which this science contributes to regulatory decision-making.

In Autumn 2014, I taught an entire course on fracking at Oberlin College to 23 sophomores and juniors. (The full syllabus with all the readings I assigned is available as online supplemental material; see the URLs at the end.) I exposed them to the latest, most highly regarded research on fracking from leading chemists, biologists, geologists, sociologists, science educators, and political scientists. While few instructors can dedicate an entire semester to a topic this narrow, instructors with limited time could meaningfully emulate one activity from the course - a policy conference.

Each student role-played a key individual in the conversation about fracking; characters included academic experts across a range of disciplines, prominent activists against fracking, industry advocates in favor of fracking, heads of government agencies responsible for regulating fracking, and the governors of New York, Pennsylvania, and Ohio. In my introductory handout to the class (formatted as a letter from the governors), the context for the conference was that the three governors were convening this group of experts and opinion leaders to "seek advice on how to regulate shale gas development throughout the three states. The governors desire regulation that is reasonable, fair, informed by the best science, and meets the needs and interests of the citizens of their states." (The introductory letter and other materials related to the policy conference are available in the supplemental online material.) I chose these three states because of their proximity to Oberlin College and the nearest shale formations; I recommend geographic changes to make this activity most relevant to your own local/regional context. (See Figure 1 for ideas.) 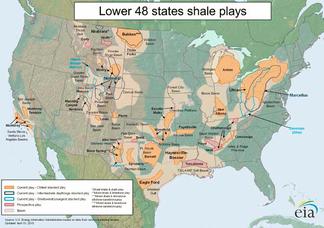 Hide
Figure 1: Shale plays (a group of prospects in the same region that are controlled by the same set of geological circumstances) abound throughout the U.S., offering the opportunity to tie classroom activities to areas relevant to your own local/regional context.

Provenance: [Image by Energy Information Administration, public domain.]
Reuse: This item is in the public domain and maybe reused freely without restriction.

This portion of the activity, before any in-class interaction, engaged students in conducting meaningful research with a specific, applied focus. At the end of the conference, I required each student to write a reflection on the conference. One student indicated, "I was really impressed with the amount of research that went into the policy conference and with the charisma that my classmates put into portraying their characters." Students were eager to learn about their characters because they knew it would make the negotiations to follow more exciting.

The in-class portion of the policy conference lasted two days. For both days, I required students to come to class in character, mentally and in dress. On the first day, each student gave a two-minute synopsis of his/her positions to all the characters at a town-hall-style event. At the end of this class and the beginning of the second class, they negotiated with each other. I instructed them to forge connections and form coalitions that could try to convince the governors of certain proposed regulations.

Halfway through the second (75-minute) class, the entire assembly sat down to discuss the arguments and justifications that arose for specific regulations that could be implemented across the three states. At that time, each faction of attendees presented its case; other factions had the opportunity to respond briefly. The conference ended with the three governors stepping outside for ten minutes to deliberate on the recommendations. During this time, I debriefed the activity with the other students.

In a short amount of time, the policy conference, the research required in advance, and the critical reflection afterwards allowed students to internalize specific information about fracking and roles in the policy process. Students ended with varying levels of command over different facts, but they all learned the complexity and nuance inherent in an issue that many people are quick to characterize as simply good/right or bad/wrong. Some students were taken beyond their comfort zone and learned from assuming roles opposed to their own views. Students did not passively receive information, they experienced it firsthand. They saw the role of research in politics and began to understand why different perspectives on fracking exist.

In their critical reflections on the activity, my students spoke to learning objectives they achieved:

Engage in an applied-learning activity

Throughout this activity, my students were immensely engaged and took hold of their own learning. To see them in character, strategically trying to persuade others of their preferred regulations, was heartening. By investing themselves in their characters and interacting with other characters, they retained a great deal of content. They also learned that any form of knowledge — natural/physical science, social science, policy awareness — is only part of the story.