Using News Reports as a Source for Controversy-Based Pedagogy 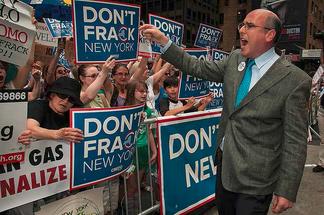 ×
Some teachers avoid controversial topics, while others embrace them as "teachable moments." Perennial "controversies" include biological evolution and biogenesis, and local news media regularly provide reports of local interest. The audience often operates under the assumption that the news media exists to inform the public. The purpose of the media, however, is to sell the media, and controversies sell well. William Randolph Hearst told Frederic Remington, sent to Cuba in 1897 to document the potential for war there, "You furnish the pictures. I'll furnish the war."

Teachers desire to represent the nature of science (NOS) in instruction, including argumentation, discussion of evidence, and evaluation of claims. Debates over controversies are a tempting educational approach, but the general concept of "debate," in the sense of formalized exchanges, is not a proxy for scientific argumentation. Such debates may reinforce misconceptions about controversial issues, injecting personal feelings or selection bias. Consequently, students may deepen convictions rather than understandings. When media outlets present scientific controversies with clear-cut "sides" to the discussion despite scientific consensus, these "alternatives" are assigned unwarranted credibility by students.

Bell (2004) suggests that the concept of "debate" as a "we-they" argument be replaced by a collaborative style of argumentation reflective of NOS. Students then examine the types of evidence presented, their validity, and reliability and determine the credibility of sources of information. As most media stories conform to a 5W+H format (what/where/who/when/why and how) the raw material for research is easily extracted (Jarman and McClune, 2005). A considerable portion of the information resides within the first two or three sentences, facilitating the initial evaluation of suitability to the argument development.

Jarman and McClune (2005) distinguish between "issue" stories and "research" stories. Issue stories are those presenting a topic of discussion, bringing in the voices of experts and non-experts alike, focused on a situation impacting on one group or another. A news story might focus on the impact of sinkholes on property owners, bringing in economic impacts of property loss or damage. The same article might include descriptions of sinkhole formation from USGS experts. In the context of an article on an issue, students should ask:

(a) Does the author of the story have expertise related to the issue?

(b) What are the local/regional implications of the issue?

(c) Does the story viewpoint represent the scientific consensus or a minority view?

(d) Does the writer/platform have a known position on the issue?

(e) Is the reader encouraged to develop his or her own opinion? and

(f) Are the arguments supported by evidence?

Research stories present results of scientific studies in a publicly accessible manner. Media reports can create controversy in reports of findings, comparing statements made by primary researchers with others in the field, contrasting or supporting the findings. The pursuit of "balance" can create a false impression that there are "camps" on an issue that are in direct opposition. For example, disagreements within the scientific community over the age of a particular rock unit may be differences over methodology, rather than disagreements over the rock's approximate age. When evaluating research stories, students should:

(a) identify how the research was conducted,

(b) define who completed the research, where, and supported by what sources of funding,

(c) describe the basis upon which the conclusions were based,

(d) isolate references to other studies or scientists,

(e) define the implications of the research, and

(f) describe the context of the story in terms of the interests of its author or media platform. 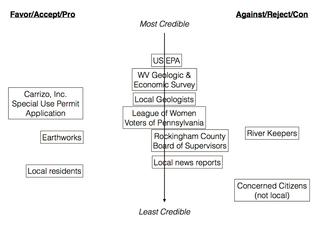 ×
Within the context of these two report types, fine-grained analyses are needed for collaboration (Bell, 2004) and for consensus-building (Kolstoe, 2010) in order to emulate the process of scientific knowledge construction. This analysis involves determining the credibility of information spectrum from "high" to "low." The purpose is not to discredit any particular information source, but to have students assign an appropriate credibility level for each source. Craven (2009) developed a "credibility spectrum" for discussing the climate change controversy. Using this framework, information sources can be evaluated along an axis ranging from being "strongly for" to "strongly against" a position on an issue. The vertical dimension of this spectrum, provides a weighting value to evaluate the sources of information. Craven (2009) suggests the following rank-order (from most to least credible):

In these examples, credibility is a function of reputation or how much each entity stands to lose if incorrect. Craven (2009) is careful to point out that this rank ordering is not absolute, and that those sources in the middle of the spectrum are variable in relative credibility on any given topic and related stories.

In 2011, a class of pre-service Earth science teachers applied the credibility spectrum to a local controversy, whether or not the county should grant permission for an outside company to drill a hydraulic fracturing test well. The exercise resulted in students determining that there was no single credible source (at the time) that could definitively inform the decision to drill the test well and that media reports that cited sources higher in the spectrum were more likely to be convincing. Ultimately, the county board of supervisors decided to deny the special use permit, but not based upon sources that ranked high on the spectrum.

Media reports are a valuable resource in classroom discussions of controversial issues, but they are most useful when filtered in a manner designed to collaboratively glean evidence and build consensus. Appropriately evaluating claims in the media can represent NOS as well as provide the basis for decision-making as a function of citizenship. Isolating details on the types of news stories accessed by students, as well as assigning relative weights to the sources used in those stories, allows for the construction of a two-dimensional consensus. This approach bypasses both the potentially false controversy represented in news reports, and the (potentially) instructionally meaningless controversy inherent to a traditional debate format.

Craven, G., 2009, What's the Worst That Could Happen? A Rational Response to the Climate Change Debate: New York, Perigree, 264 p.

Jarman, R., and McClune, W., 2005, Science Newswise: A Guide to the Use Of Newspapers in Science Teaching: Belfast, Queen's University Belfast, 239 p.