Please join us in congratulating the new officers that were elected in this year's election. Their terms in the NAGT leadership will begin with the Annual Meeting held in conjunction with the GSA meeting in October in Minneapolis. 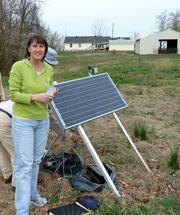 Aida Awad currently serves as Science Department Chair at Maine East High School in Park Ridge, Illinois, an administrative role where she oversees a department of 24 science faculty. Aida also teaches a dual credit Physical Geology course with Oakton Community College. Prior to serving as Department Chair, Aida taught Physical Geology and Earth Systems Science at Maine West High School for nine years. Aida earned a B.S. in Geology and a B.A. in Political Science at University of Illinois at Chicago in 1981, and an M.S. in Earth and Environmental Sciences at University of Illinois at Chicago in 1993. Aida's research interests include increasing student achievement in geoscience classrooms through the integration of technology, including GIS and collaborative tools that support inquiry and problem-based learning.

Aida's experience serving the NAGT community began three years ago when she started a term as a Councilor-at-Large. As an NAGT Councilor she has attended all in-person and virtual meetings, represented NAGT at GSA, NSTA, and several regional geoscience education meetings, been involved in the long-range planning process as an Executive Committee member, and served as an Associate Editor for the Journal of Geoscience Education. Aida looks forward to continuing to work with the NAGT community. Areas in which she would like to continue to focus include building NAGT membership, improving the level of recognition of the geosciences as a rigorous science, working toward the development of an AP Earth Science exam, and exploring new ways NAGT can support the geoscience education community.

Dr. Tamara Shapiro Ledley received her PhD from the Department of Meteorology and Physical Oceanography at MIT in 1983 and her BS in Astronomy from the University of Maryland in 1976. She conducted a research program in Earth system science and climate change with an emphasis on the Polar Regions at Rice University for 15 years, authoring over 30 scientific papers. The focus of her research was to understand the role of sea ice and continental ice sheets in shaping global climate.

Dr. Ledley has been involved in Earth system science education activities since the late 1980's. Her early work includes developing museum exhibits that bring near real time images of the Earth to the public, directing teacher training programs in Earth sciences, developing Earth system science learning activities for the GLOBE program, and developing scientific research programs for the participation of students. More recently she has been involved in a number of projects that focus on the facilitation of the use of Earth science data in educational contexts, improving climate literacy in formal and informal education, and the efforts of the national digital library. Dr. Ledley's currently leads the Climate Literacy and Energy Awareness Network (CLEAN) Pathway project, a stewarded collection of inquiry-based educational resources that help learners understand the Essential Principles of Climate Science; and the EarthLabs project to provide the laboratory component of a high-school/lower level college course in Earth system science and climate change. To facilitate the use of online Earth science data sets in educational contexts Ledley leads the Earth Exploration Toolbook (EET), an online resource that provides step-by-step instructions for the use of Earth science datasets and data analysis tools by teachers and students, and runs professional development programs to facilitate the effective use of the EET. Ledley also leads the AccessData project to facilitate communication between the scientific and educational communities to create additional EET chapters.

Dr. Ledley has served as the founding chair of the Federation of Earth Science Information Partners' (ESIP Federation's) Standing Committee for Education. She has also served the ESIP Federation as Vice-President, Applications Center Representative, and as a member of the Board of Trustees of the Foundation of Earth Science. She is a founding convener and chair of the Climate Literacy Network and is currently a member of the National Research Council's Climate Change Education Roundtable. She has also served as the chair of the Committee on Global and Environmental Change of the American Geophysical Union (AGU) and chair of the panel to write the original AGU position statement on Climate Change and Greenhouse Gases in 1998. Please click here for a more detailed curriculum vitae for Dr. Ledley.

Karl Wirth teaches mineralogy, petrology, planetary geology, field methods, and introductory geology at Macalester College. His geoscience research efforts have focused on the application of trace element and isotopic evidence to investigate questions about the origin and evolution of the Earth's crust and lithosphere. He is also interested in teaching and learning and has been a regular contributor to NSF and NAGT-sponsored On the Cutting Edge workshops. His current geoscience education research interests focus on student motivation, attitudes, and values as part of the NSF-funded GARNET (Geoscience Affective Research NETwork). In undergraduate research, Karl has co-directed three projects for the Keck Geology Consortium and he also currently serves as the Assessment Coordinator for the consortium. He is also interested in developing the global understanding of science students and has been involved in planning, developing, and directing several international programs. Karl recently completed a three-year appointment as Associate Director of the Serie Center for Scholarship and Teaching at Macalester, and he currently serves as a Training Associate for the IDEA Center. He regularly leads faculty development workshops on topics ranging from metacognition to active learning, course design, and the evaluation of teaching.