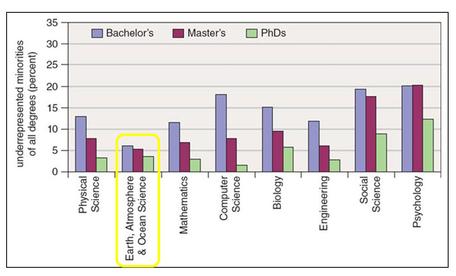 Hide
Figure 1. Ethnic and racial diversity are extremely low in geoscience degrees at all levels. A recent report from Bernard and Cooperdock (2018) indicate that, while significant advances in gender diversity have taken place, no progress on ethnic and racial diversity in the geosciences has been made in 40 years at the national level at the doctoral level despite measurable gains at the undergraduate level as reported in Wilson (2016). Modified from a figure in Johnson and Harrison Okoro (2016), based on data in National Academy of Sciences (2011). Source: https://www.americanscientist.org/article/how-to-recruit-and-retain-underrepresented-minorities

Provenance: Modified from a figure in Johnson and Harrison Okoro, 2016, American Scientist, based on data in National Academy of Sciences, 2011, Expanding Underrepresented Minority Participation. https://www.americanscientist.org/article/how-to-recruit-and-retain-underrepresented-minorities

The geosciences as an allied group of fields touch virtually all aspects of the human enterprise: locating and providing water, energy and mineral resources; assuring a safe and resilient environment for civilization; and providing an understanding of how the Earth system functions today, in the past and into the future. Given how the geosciences touch the lives of all people, it should also be a field that is representative of all people, but this is not yet the case (Figure 1). Especially with the global importance of the geosciences growing and the geoscience workforce projected to encounter shortfalls of qualified practitioners in the coming decades, it is imperative that the geoscience education research community frame and investigate central questions that can help increase the diversity of the geosciences at all levels. We must find ways to attract all kinds of students, especially those from under-represented groups to our sciences and build programs, experiences and careers in which they thrive. We deliberately embrace the notion of "attract and thrive" after the work of Roberto Ibarra and colleagues (e.g., Ibarra, 2001, 1999) that rejects the notions of "recruit and retain"—involuntary, or at least passive, actions that happen to under-represented people in the field—and embraces more active and supportive concepts of attraction and thriving. The theory of multicontextuality advanced in their work acknowledges the effect of complex, interwoven identities of under-represented students at they learn in and interact with STEM fields, and the explicit importance of institutional attention and action to identify and lower barriers to success while providing necessary support. These ideas also provide a way forward in addressing the challenges of diversifying STEM fields shared across all science and engineering fields, as articulated by the National Academies report on "Expanding Underrepresented Minority Participation" (2011). The research questions and challenges posed in that report undergird much of the analysis and synthesis we pose in our Grand Challenges, in addition to work specifically in the geosciences.

The research challenge boils down to two essential and interdependent perspectives, specifically: (1) the point of view of the individual students, faculty and professionals as they manage their own internal balance of identities as they traverse curricula, programs and career pathways, and (2) a view that captures system-wide interactions around the individuals at all stages, including family, culture, department, university and society. The Grand Challenges focus on these two approaches.

Grand Challenge 1: Supporting the Individual in the Geosciences: How can we recognize and support the individual identities and personal pathways of students as they are attracted to and thrive in the geosciences?

Many of these issues are now well-informed by research from outside the geosciences, and we have the programmatic experience and our community have access to more nuanced theory to make significant steps forward in understanding program design and student pathways.

Grand Challenge 2: Geoscience Community Efforts to Broaden Participation: How can the geoscience community capitalize on evidence from different scale efforts to broaden participation?

Solutions and programs must scale appropriately to the situation and communities at hand. Success and solutions in diversity has no singular solution - healthy programs and communities who are diverse and welcoming exhibit sets of characteristics which are repeated.