Tapping into students' intrinsic interest in the environment at a young age is the key to promoting lifelong interest and awareness of climate change. 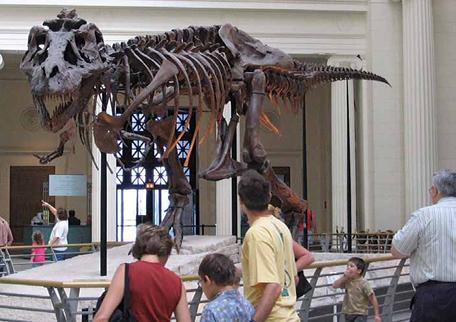 ×
Visitors to Chicago’s Field Museum marvel at “Sue,” the tyrannosaurus, and other natural wonders.

I became smitten by the wonders of the universe viewed through the lens of science while in elementary school. In second grade, a fascination with dinosaurs opened my mind to deep time. My fourthgrade class took a field trip to a power plant where coal brought by trains from Wyoming was burned to make steam to turn turbines to generate alternating current. The scale and scope of the plant, the massive turbines, smoke stacks, and piles of coal waiting incineration were intimidating and impressive. Around the same time, while exploring near the mouth of a canyon, my friends and I found a beautiful little oasis and waterfall on an intermittent creek. We were livid when one day not long afterward we discovered that a bulldozer constructing roads for a new mountain subdivision had deliberately destroyed our oasis. Children of the Space Race and Cold War, we had no doubt that humans had become a force of nature capable of altering, if not destroying, the planet. These experiences planted the seeds for my love of science and my career path.

In the years since I was in elementary school, we have learned to measure changes on the Earth in ever greater detail. Consequently, we know much more about humans as a force of nature.

The population of the planet has more than doubled since the 1960s. Not only that, but humans are now consuming massive amounts of fossil fuel-derived energy, transforming the world on a geologic scale. We fix more nitrogen for fertilizers than the combined effect of all bacteria on the planet and cause more soil erosion than all natural processes. We move freshwater large distances to meet our needs, and with 80 percent of it going to agriculture, we contribute to further erosion and water pollution.

The primary grades from kindergarten through fifth grade are important and appropriate venues to establish foundational understanding of science and develop thinking and innovation skills. . . .

By learning the essentials of climate and energy early on, they can be prepared in middle school to tackle the topic of human-caused climate change and to delve into the causes, effects, risks, and responses in more detail in high school.

We are also substantially altering the climate system. Reports by the Intergovernmental Panel on Climate Change (2013) and the National Climate Assessment (Melillo 2014) suggest global average surface temperature will rise modestly or substantially by 2100, depending on whether and how society responds. At the present exponential rate of change, human activities will increase radiative forcing of the climate system from ~2 to over 8 W/ m2 by the year 2100, causing massive changes in ecosystems and societies. Mitigation and adaptation to these changes will require a massive transformation of society by means of education, beginning in elementary school, to minimize climate impacts and maximize resilience and options.

Educational research used in the development of the Framework for K-12 Science Education: Practices, Crosscutting Concepts, and Core Ideas (NRC, 2012), confirms that the primary grades from kindergarten through fifth grade are important and appropriate venues to establish foundational understanding of science and develop thinking and innovation skills. Born investigators, elementary students can observe weather, seasonal change, and how organisms respond to changes. They can study microclimates around the school, explore how energy flows through ecosystems and food webs, examine how the energy we consume in our lives is generated, and develop strategies and tools to minimize human impacts on the environment. By learning the essentials of climate and energy early on, they can be prepared in middle school to tackle the topic of human-caused climate change and to delve into causes, effects, risks, and responses in more detail in high school.

As with any sensitive subject, educators obviously need to handle with care how such discussions are framed. Pondering a future that will be radically different from the world of their parents and grandparents could be understandably distressing to students. This can trigger avoidance and denial. One way exemplary teachers have found effective in addressing topics of this nature is to emphasize that while the challenges are substantial, there are also exciting opportunities for creativity and innovation. Technologies and jobs that don't exist today will need to be developed to help tackle the climate, energy, food, and water problems that we are already facing. Inspiring learners to come up with their own innovative ideas and strategies grounded in reality and checked against solid science can help counter the urge to disengage and tune out. If properly nurtured, primary school students can be inspired to explore new territory and carry their motivation and momentum with them into secondary school and beyond.

On occasion I have run into individuals who feel climate change shouldn't be taught in school, that it is too complex, too emotionally and politically fraught, for young people to learn about. Such attitudes baffle me. Every one of us is, whether we know it or not, already being impacted in some way by climate change and will be more so in the future. As individuals and communities, we all deserve to know how to make informed climate choices to reduce risk and maximize resilience.

The historic reasons for the omission of climate change in the curriculum are numerous: In addition to the emotional toll and resulting resistance the topic can engender, climate and energy are complex and technical topics that fall into the cracks between traditional disciplines. There has also been a legacy of deliberately manufactured doubt and confusion on the part of business or ideological interests threatened by the implications of the science. This has led to a tendency to avoid the issue even among those who accept the science.

Given that most of the 1.6 million elementary teachers in the U.S. lack a background in science and, due to testing, are often under pressure to emphasize mathematics and language arts in their classrooms, this may sound like a tall order. But there are simple and practical steps that can be taken to weave these topics into elementary school classrooms.

Observing daily and seasonal changes, contemplating the upstream and downstream flow of our food, water, and energy systems, and exploring ways to reduce waste and negative impacts of human activities are all part of the Next Generation Science Standards for elementary students. Field trips to visit power plants might be more difficult to organize now than it was when I was in school, but even a visit to the school's boiler room, guided by someone who can describe how it works and when it is used for heating or cooling, can provide a powerful "teachable moment."

Some schools are being transformed into living laboratories that are climate-smart and energy efficient. Ideally all schools can become interactive hubs of creativity for learners and their communities. At the elementary school level, however, establishing the foundation for understanding general principles of climate and energy is more important than having students do detailed carbon footprint or energy audits, which are more appropriate for middle and high school. As the NRC Framework for K-12 Science Education lays out, planting the seeds of inquiry and investigation should begin early on, starting with everyday experiences and a problem-solving attitude, which will help set the stage for further, deeper learning in the years that follow.

College educators, especially those involved with pre-service and professional development for teachers, can play a vital role—by giving elementary teachers in particular the support and guidance they need to give their learners foundational knowledge and skills that they can build on in decades to come.