Trying to Avoid a Water Crisis in Acton, MA

Kim Kastens
Lamont-Doherty Earth Observatory
Kim Kastens, Lamont-Doherty Earth Observatory
Author Profile
published Apr 11, 2017 4:00pm
I honestly can't remember who entrained me into this controversy. But about a year ago, I found myself at a hearing of the Board of Selectmen of my new town, Acton, Massachusetts. This whole New England form of government, with the Board of Selectman, and Town Meeting, and other vestiges left over from the Puritans, was a mystery to me. Gradually, I came to understand the controversy of the moment. A neighboring town, Concord, was seeking to build a new water treatment plant that would allow them to greatly expand their public water withdrawals from Nagog Pond, a small reservoir that straddles the town line of Acton and Littleton. An arcane 1884 law gave Concord, Acton, and Littleton rights to withdraw water from this pond, but only Concord has exercised this right to date. The treatment plant is in Acton and in a residential area, so they needed a special building permit, and thus the series of hearings before the Acton Board of Selectmen.

Hour after hour, citizen after citizen stood at the microphone and explained why they thought that expansion of Concord's water treatment plant was a bad idea for Acton. A montage of issues spewed forth, in the random order in which people had lined up at the microphone. Archeological artifacts, chemical-bearing trucks driving down narrow local roads, an enlarged fence cutting off access and views, fish harmed during the dewatering process, wildlife corridors cut off by the fence, cold water fish habitat downstream from the dam, air pollution from the generators, noise from the generators, ugly industrial design of the building, access for fishing, and on and on.

Out of this chaos of citizen's comments, it gradually dawned on me that the real problem here was that the Board of Selectmen was about give the green light to a sequence of events that was going to squander a resource that our town was very likely to need in the not-so-distant future. I found myself standing at the microphone explaining that the climate change forecast for New England calls for more frequent seasonal droughts, that the shallow wells that provide Acton's town water are vulnerable to both drought and pollution, that we are running out of suitable places to drill more wells, and that we are likely to need that Nagog Pond water in the future--and we shouldn't give it away casually. A few other like-minded citizens were saying similar things, and we began to share ideas and coordinate our efforts. The deeper we dug, the more problematic Acton's water situation turned out to be, on multiple dimensions.

We lost the first round. After a year of hearings, the Board of Selectmen approved the special use permit for the enlarged water treatment plant. However, they imposed a lengthy set of terms and conditions, and we could see traces of our issues and even our language echoing in the conditions.

But then we won big on the second round. By citizens' petition, we submitted three articles for consideration at the annual Town Meeting. Article 26 called for getting the science right, for the Board of Selectmen to commission a 20 year forward looking study of the threats and opportunities for Acton's water supply. Article 28 called for getting the law right, for the Board of Selectmen to petition the legislature to affirm and clarify Acton's rights to Nagog waters under the 1884 law. And Article 27 called for regional discussions of water sharing among the three towns. We prepared and practiced a careful presentation, and pre-seeded some supportive commenters among the attendees. But then, out from the townspeople arose a multitude of supportive commenters, people we didn't know and hadn't approached ahead of time. The line grew long at the "Pro" microphone, and not a single person approached the "Con" microphone with a comment in opposition. And then the voting commenced, and all three articles passed unanimously.

This was last night, and so I'm still riding high on the experience. And we all know that there is still lots of work ahead to extract ourselves from Acton's water problems.

But for now, here are some things I learned:

Framing is really important: I know that the Selectmen put a huge amount of time and effort into their decision on Concord's application. I believe that they were acting in good faith in what they perceived to be the best interest of the Town of Acton. However, I think they had in their minds that this was basically a zoning issue, and they had a template or mental model of what kinds of facts and lines of reasoning were germane to a zoning hearing—and protecting the water supply of the town was way outside that template. They thought that water resource protection was someone else's responsibility, perhaps the state Department of Environmental Protection. As geoscience educators, we need to build an understanding that protecting the environment is everyone's responsibility, all the time.

Geoscience and Geoscience education skills are transferable: I am a marine geologist by training and a geoscience education researcher by recent profession. I have never taken a hydrology course. But "in the land of the blind, the one-eyed man is king," and it turns out that I knew enough. I knew how to find relevant data and reports, how to plot and interpret data, how to ask questions and seek answers. When we discovered a USGS report about an application of the FLOW-MOD model to the Assabet River Basin (within which we sit), it was obvious to me that contacting the author was doable, allowable, and useful. The @ldeo.columbia.edu email address caught her attention, she responded to my message, and gave us invaluable insights. It turns out that speaking in front of the Board of Selectmen or citizens' groups is a lot like speaking in front of thoughtful, engaged undergraduates: you need to think about what your audience knows and cares about, introduce new information one tidbit at a time, use clear graphics and normal English words, and listen carefully to their questions. 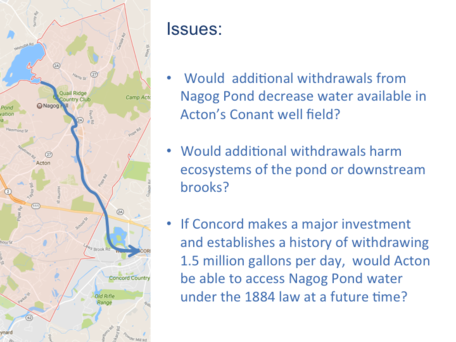 Provenance: Kim Kastens, Lamont-Doherty Earth Observatory
Reuse: This item is offered under a Creative Commons Attribution-NonCommercial-ShareAlike license http://creativecommons.org/licenses/by-nc-sa/3.0/ You may reuse this item for non-commercial purposes as long as you provide attribution and offer any derivative works under a similar license.
I was the one who assembled the case and made the slides for the statement of the problem as presented at Town Meeting. Almost all the lines of reasoning we put forward were either spatial thinking or temporal thinking. We showed a map of where the town wells are located and pointed out the paucity of remaining drillable locations. A map of the neighboring Superfund sites and the pathways of the plumes of 1,4-dioxane travelling towards our Assabet well field. A time series graph of Acton's population growth relative to when crucial decisions about water resources were made. A time series graph of water withdrawals from Nagog Pond relative to the planned capacity of the new plant. We got many compliments on how logical and compelling our presentation was. Spatial and temporal lines of reasoning resonate with folks.


Geoscience alone is not enough: Our little cabal of water protectors included quite a range of skills and experience, and we needed them all. Carolyn is an environmental lawyer, who unearthed the 1884 law and its granting of priority water rights to Acton and Littleton. Ron is a former environmental consultant, who discovered the USGS hydrologic model for the Assabet River Basin. Barry is the long time chair of an advisory committee for the Acton Water District, who seems to know the backstory and rationale every decision ever taken concerning water in Acton. Terra is a seriously well-connected sustainability activist and a former Acton Select Board member. She thought up the idea of submitting a Citizens' Petition, and knew how to make it happen, who to talk to, how to word the articles, how to build support. Our formal petitioner, Bob, is a neuroscience professor who lives adjacent to Nagog Pond; he saw beyond the abutters' issues to grasp the bigger problem.

The Worldwide Web is a great boon to participatory democracy: Our group could not have done our work without email. We don't live close together, and we all have busy schedules with considerable travel. The Town of Acton maintains a web-based docushare repository, containing every document submitted to the Board of Selectmen, every letter, every email, ever powerpoint from over a year of hearings. When I pulled up a mental picture of a graph Concord had shown months earlier, I was able find the original in the docushare. And Google search brought us to all sorts of relevant data and documents.

Controversy makes for great teachable moments: Every single person who reads the local paper or came to Town Meeting is now more aware that water is a precious and vulnerable natural resource. Perhaps they have begun to understand that it's all connected, that water taken from one place in the basin is not available someplace else, that water flows invisibly inside the ground as well as visibly across the surface, ignoring the boundaries that we humans establish.


Trying to Avoid a Water Crisis in Acton, MA -- Discussion