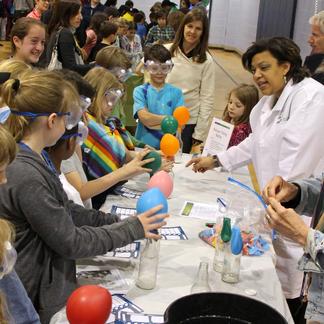 ×
NAGT is proud to announce its 2018 partnership with the national March for Science movement. The March for Science, an emphatically nonpartisan event, calls for science that upholds the common good, and for political leaders and policymakers to enact evidence-based policies in the public interest. As stated in its Mission, the March for Science champions robustly funded and publicly communicated science as a pillar of human freedom and prosperity.

The stated values of the March include:

Activities and Signage:
Get ideas for the March

By endorsing the march, NAGT affirms these principles, recognizes the importance of science and science education to our citizens, and stands up for diversity, inclusion and equality in science. We encourage our members to march in support.

The 2018 March for Science took place Saturday, April 14, with satellite marches occurring across the country.

Advocating for Science Education is Part of Our Mission

Part of NAGT's mission is to foster improvement in teaching and learning about the Earth sciences. The March for Science will engage a diverse group of people who are interested in the role of science in our government. It is our hope to demonstrate the critical importance of supporting high-quality science and science education. We do not advocate for or against specific people or policies, but advocate for science and science education. Our message is not one of rejection of beliefs or ideals, but one of positive support for the role of science and the scientific endeavor. It is also intended to catalyze productive discussion of the role of science in society.

You can help make the case that NAGT supports strong science and science education by:

Remember that NAGT is a not-for profit organization focused on supporting geoscience education, and we ask you to follow our code of conduct if you march as a representative of NAGT. If you choose to march as an individual rather than an NAGT member, these are still good ideas.

NAGT leadership considered several points of view in deciding to support the March for Science. First, as described above, we wanted to make sure that the March was for science and not for specific political points of view. Several of the goals of the March are closely aligned with our mission including cutting-edge science education, diversity and inclusion in STEM, open and honest science communication, and inclusive public outreach. Second, we considered the relative damage of participating in what some may view as a political event vs. not participating and thus having a march with poor representation of geoscience education. We believe that it is important that geoscience education send a strong voice of support and be seen as a central part of science and science education. Further, we believe that this is an opportunity to use our voice for high-quality, inclusive geoscience education. If educators are absent from the March, others will define what is meant by cutting-edge science education. There is a danger that education could be equated with an elite group telling people the facts of science and how to use them. We believe the best way to counter that is to demonstrate at the March what high-quality inclusive education means to us. To learn more about the pros and cons of participation read more:

As 501(c)(3) organization, there are limits to political activities, especially as related to lobbying. But the March for Science and its related activities are not lobbying for or against particular candidates, elected officials, or legislation, and therefore these activities are not only fully allowable but central to the work of the National Association of Geoscience Teachers. While a 501(c)(3) organization can engage in limited lobbying without endangering their tax exempt status, we see no need or desire to do this in association with the March for Science. Too much lobbying activity by an organization risks loss of tax-exempt status. As individuals, our members can, of course, lobby. However, we ask that members only lobby as individuals, and in those efforts the members make clear that they are lobbying as individuals.

Also in keeping with our Code of Conduct:

One of the goals of our code of conduct is to reduce what is known as the backfire effect, which causes people to hold more tightly to their convictions when those convictions are challenged.

Show Resources on Engaging Controversial Issues and the Backfire Effect

Resources that Address Discussing Controversial Issues and the Backfire Effect