May 2009 Journal of Geoscience Education 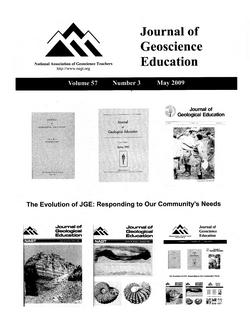 Hide
For 58 years, the Journal of Geoscience Education (JGE) has served a vital function as the dominant peer-reviewed dissemination mechanism for curriculum, development of new materials and methods for instruction, as well as research into the effectiveness of these interventions, has become increasingly important to the STEM (science, technology, engineering, and mathematics) community, and to all communities of learners. In addition, fundamental research into the nature of complex cognition in adult learners is emerging across STEM fields, with new and exciting efforts finding traction within the geosciences. As the longest-standing education journal focusing on a specific STEM discipline, JGE has the opportunity to lead the dissemination of the highest-quality pedagogy and research evolving out of the current resurgence in STEM educational activities. Now and in the future, JGE is expected to be a publication venue for a diversity of material, including new curricular approaches, research into the effectiveness of instruction, and fundamental education and cognitive investigations.
Full Text (Acrobat (PDF) 685kB Nov12 09)
URL for this article: http://www.nagt.org/nagt/jge/abstracts/may09.html#v57p165

Hide
Here we argue that there are several reasons why students are still graduating in droves with inadequate views of the Nature of Science (NOS) and strong anti-evolutionary sentiments. 1) Science educators often neglect teaching the NOS because they feel pressure to cover a certain amount of science "content," and it takes too much time to adequately teach the NOS. 2) But even if they do address the NOS, scientists and science educators often harbor naïve views of the NOS similar to their students' views. 3) Furthermore, even those who do have more sophisticated views of the NOS typically soft-pedal those aspects of the NOS that might lead their students to adopt more sophisticated views. 4) Science educators usually neglect to discuss students' religious objections to scientific theories because they are typically not very religious themselves. but 5) if they do, they often make the situation worse by making outrageous gaffes regarding the science/religion interface. 6) Finally, standard resources meant to help science teachers teach the NOS and deal with religious objections actually encourage instructors to softpedal certain aspects of the NOS and make naïve claims about the science-religion interface. In the following sections, we further explain and support the above characterization of this complex problem, and then describe a suggested course of action.
Full Text (Acrobat (PDF) 2.3MB Nov12 09)
URL for this article: http://www.nagt.org/nagt/jge/abstracts/may09.html#v57p168

Hide
Here we describe a method for teaching the NOS called "Science as Storytelling," which was designed to directly confront naive realist preconceptions about the NOS and replace them with more sophisticated ideas, while retaining a moderate realist perspective. It was also designed to foster a more sophisticated understanding of the science-religion interface, where occasional science-religion conflicts are seen as inevitable in cases where religious beliefs incorporate supernatural intervention in the natural world. We evaluated the program as implemented in a geology course for pre-service elementary teachers at Bringham Young University, ans showed that it was successful at helping students understand the tentative and creative aspects of scientific thought, and fostering more positive attitudes toward science. Our evaluation also showed that the students adopted a more irenic stance toward science-religion conflict. These results directly contradict fears that emphasizing the creative and tentative aspects of the NOS, and admitting that science and religion sometimes conflict, will cause students to reject scientific claims to an even greater degree.
Full Text (Acrobat (PDF) 2.2MB Nov12 09)
URL for this article: http://www.nagt.org/nagt/jge/abstracts/may09.html#v57p178

Hide
The Urban Schoolyards project is a two year partnership with a university Earth Science Department and the surrounding urban elementary schools. The goal of the project was to develop the capacity of elementary teachers to teach earth science lessons using their schoolyards and local parks as field sites. The university personnel developed lessons and resources which were taught to the teachers during a summer institute. The teachers then implemented these lessons with their elementary classes during the following school year. It was found that 70% of the teachers who participated in the summer institutes used their schoolyards and local parks for science lessons during the following school year.
Full Text (Acrobat (PDF) 751kB Nov12 09)
URL for this article: http://www.nagt.org/nagt/jge/abstracts/may09.html#v57p191

Hide
Although an understanding of radiometric dating is central to the preparation of every geologist, many students struggle with the concepts and mathematics of radioactive decay. Physical demonstrations and hands-on experiments can be used to good effect in addressing this teaching conundrum. Water, heat, and electrons all move or flow in response to generalized forces (gradients in pressure, temperature, and electrical potential) that may change because of the flow. Changes due to these flows are easy to monitor over time during simple experiments in the classroom. Some of these experiments can be modled as exponential decay, analogous to the mathematics of radioactive decay, and can be used to help students visualize and understand exponential change. Other, similar experiments produce decay or change that is not exponential. By having classes, in small groups, conduct several experiments involving flows, a learning synergy can be encouraged in which the physical and mathematical similarities of flow processes are emphasized. For the best results, students should be asked to analyze the experimental data, using graphs and algebraor calculus as appropriate to the class, to determine the nature of the decay process and to make predictions, either forward or backward in time as would be done for radiometric dating. Basic quantitative skills are strengthened or developed as part of these activities. Encouraging a number of important geologic processes in the same mathematical processes hyelp build a quantitative literacy that can be transferred and applied to the other processes.
Full Text (Acrobat (PDF) 1.3MB Nov12 09)
URL for this article: http://www.nagt.org/nagt/jge/abstracts/may09.html#v57p196

Hide
When teaching phase partitioning concepts for solutes in porous media, and other multi-phase environmental systems, explicitly tracking the environmental media phase with which a substance of interest (SOI) is associated can enhance the students' understanding of the fundamental concepts and derivations. It is common to explicitly track the customary mass, length, and time based units. The expansion described here is to also track the specific media phases to which these fundamental units apply. This additional step forces students to think more carefully about concentrations and other terms. This paper presents a consistent system of notation for teaching these concepts and some examples of how this system is used. The examples presented here are based on solid-liquid partitioning and a linear Freundlich adsorption isotherm, but could also be applied to other environmental media, such as air and biological tissue, as well as other partitioning models. This approach is most appropriate for advanced undergraduate and graduate students.
Full Text (Acrobat (PDF) 937kB Nov12 09)
URL for this article: http://www.nagt.org/nagt/jge/abstracts/may09.html#v57p206

Using a Historical Controversy to Teach Critical Thinking, the Meaning of "Theory", and the Status of Scientific Knowledge
Keith Montgomery, University of Wisconsin Marathon

Hide
It is important that students understand the "open-ended" nature of scientific knowledge and the correct relationship between facts and theory. One way this can be taught is to examine a past controversy in which the interpretation of facts was contested. The controversy discussed here, with suggestions for teaching, is "Expanding Earth versus Sea Floor Spreading." Although this was a short and limited controversy within the mainstream scientific community, it has the advantage of having primary sources that are accessible to students to read for themselves. What makes this controversy intriguing is the later conversion of one of the protagonists (Tuzo Wilson) to tectonics. The controversy is framed explicitly in terms of several criteria for agreeing on the optimal theory: it is an exercise in what has been termed "theory choice" by Thomas Kuhn. Framing the controversy in this way can teach students a great deal about the emergence of scientific theories as well as criteria that can be used to judge ideas in a mature fashion.
Full Text (Acrobat (PDF) 860kB Nov12 09)
URL for this article: http://www.nagt.org/nagt/jge/abstracts/may09.html#v57p214